Lots of things recently have had be reaching for the past and none more so then the other day when someone mentioned those immortal words "Turkey Twizzlers".  Produced by Bernard Matthews back in 2005, when your school dinner cost 45p a day, these yummy items were removed from schools and discontinued because Jamie Oliver branded them unhealthy.
Excitement mounted in this house when, in 2014, Bernard Matthews applied to trademark "Oliver Twists" which sounded very similar, there doesn't appear to have been any movement since unfortunately. 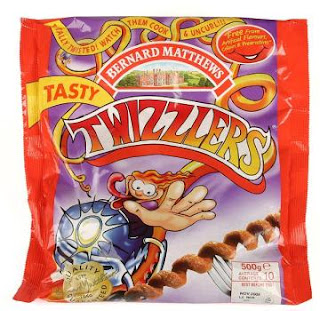 So it got me thinking... how hard can they really be to make? They were basically turkey (34%) and 39 other ingredients (approx) including water, pork fat, rusk, wheat starch, three sweeteners, hardened or hydrogenated vegetable oil, colourings and flavourings. OK so mine will have to be a bit healthier then them
Obviously Turkey Twizzlers would be trademarked so Ben re-named our version "Turkey Twirls".

Ingredients:
500g turkey mince
50g breadcrumbs (I went for normal  ones)
an egg

Method:
Combine the turkey mince and breadcrumbs with the seasoning in a blender and mix until a firm mush is formed. 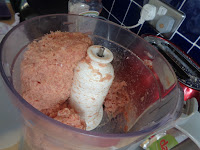 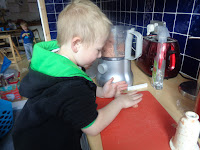 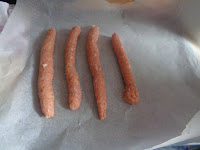 Roll the sausage in flour, then egg and finally coat with the golden breadcrumbs. 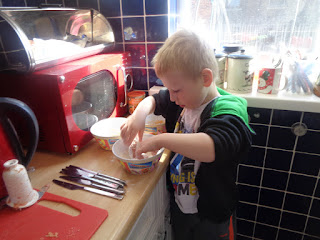 Take a knife and twist the sausage shape around it.  Repeat... and repeat ... and repeat...
As  you can see we originally tried to use kebab sticks but the twizzlers stuck to them when frozen and you could only remove part way through cooking.

It's also trial and error to get the sausages perfect - too thin and they break mid twirl, too thick and you can't get a good shape. 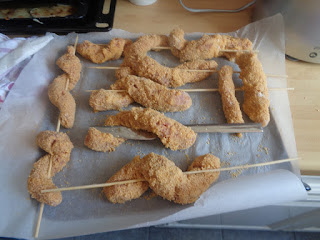 place on a greaseproof paper covered baking tray and put in the freezer for 30 minutes.

Once set remove the knives (and paper).

Put back on the baking tray and cook in a pre-heated oven, 200' / gas mark 6 for 25-30 minutes until cooked and golden.
Note:  for an authentic school feel you could deep fry instead. 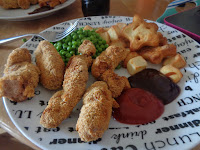 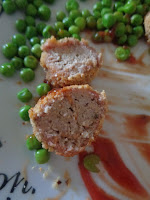 Ben loved helping to make these and both boys had clean plates at the end asking for more.  Personally I think they needed some tomato puree or something,  they tasted strongly of oregano but not a lot else.

If you decide to make these, or already have a tried and tested recipe please let me know your links below.
Posted by Scouting Mummy at 09:00