When I was little I spent hours and hours with my LEGO box building multi-coloured house after multi-coloured house.  The base was a thick green rectangle (what's happened to them now?) and then I built up the walls with any and every colour I had with some windows nice and evenly dotted around then another green block on top.  We didn't have a 'set' that I can remember so had to be creative.

Not like now, the boys have tons of sets, fire stations, police stations, train stations, numerous vehicles and a proper house, not to mention a harbour and Hulks Hellicarrier. 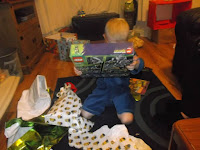 Sadly as the models get broken up (as they do with a 7 and 4 year old) they don't always get rebuilt, as this happens all our pieces go into storage drawers. 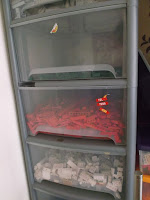 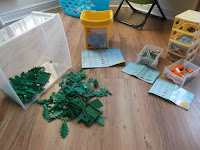 Then we moved house and decided that would be a perfect sort out opportunity, well we got part way, we started to bag up the sets but only managed a few.

Now the instructions are all boxed away as we are re-decorating the boys rooms and (after climbing over boxes) I was able to bring their LEGO downstairs to play with, but they were lost.  You see that's the problem with buying sets now, my boys don't have the experience of building for the fun of building.  Which was why it was perfect timing for the DK LEGO® Awesome Ideas* book to land on our doorstep.


The LEGO® Awesome Ideas Book is full of ideas to expand your LEGO sets (e.g. a bike rack) or to use LEGO in a way never before considered.
The book is split into sections taking you from outer space to Modern Metropolis, The Wild West to a fantasy land and even the real world.  Each chapter has step-by-step demonstrations, model galleries, insider tips and intricate show stoppers. The back of the book has a suggestion for bricks that should form the ideal master-builders tool kit.

So with book in hand and LEGO covering every inch of the dining room floor me and 2 little master-builders in training set to work.  Now the last thing we were going to was attempt the whole book so we all choose our favourite pieces. 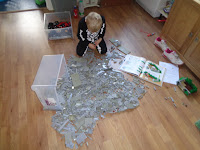 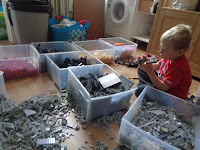 Noah loved this little creature, and he looked pretty easy.  We found the bits for the legs and built them, we also made the arms.  Then we hit a stumbling block - what on earth was a "plate with a ring" they were using on the body?  HOW did the body and legs join together?  We also realised we had no "telephone handsets" to join the arms to the body.  WOOPS.... now what??

Me and Ben raided the pieces we did have and tried various combinations before working out how we could fix it. ... and then we couldn't find the bits for a 'zapper-pole' or his 'hair'.... ahh well we'd changed it thus far lets carry on being creative ..... and lo.... the hoover-bot was born.  This little creature goes around the planet hoovering up all the dirt, and Noah fell in love with him.   I am sure many more robots will be born in the next few months..... 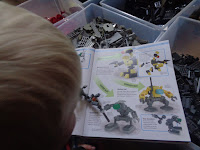 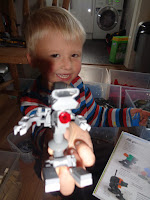 This project deserves a special mention even though we couldn't make it as we didn't have enough gear tracks, am going to have to order some as Ben is eager to make this.  It was the first thing he'd found in the book and added to his wish list of ones to make.

We had so much fun making this one, from finding the bits to putting it all together.  It's so simple but looks so effective and would make a great addition to any city scene.

We had to tweak the design a bit due to running out of flat brown pieces (you'll see why later) which meant getting the hedge to stay standing up was quite a challenge.

We had to use different bricks then suggested to build the wall and decided to extended it around the rest of the field to enclose it fixing more 'leaves' to it to cover up the mismatch of bricks.

Ben quickly whipped up a tractor and trailer and putting a Halloween spin on the field we decided to plant some pumpkins (orange lights) with the prize pumpkin on the trailer. 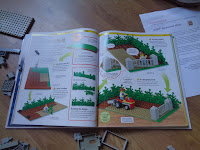 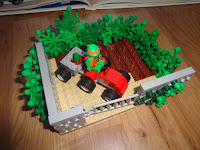 Ben loved making his mobile phone and spent ages 'making calls' on it and I must admit it looked pretty good.  Unfortunately Noah needed one too and we didn't have enough blank grey squares or single studded jumper plates to make an identical one, and so we set about seeing what we could use.  Apparently it worked just as well (if not better) as Ben's shiny black one so I'd mark that up as a win. 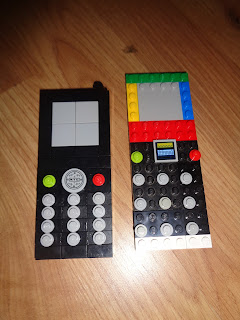 The boys had so much fun making these, I think they would have gone on all day of they hadn't run out of bricks. 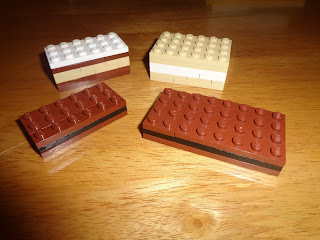 Ben copied the design for this one and was really impressed with himself.  Then Noah wanted one but there were no barrels left (I didn't even know we had the one Ben had found) so I had a chat to him about how we could change it and it went off and found the smaller barrel.  A quick look through whites and he found some 'icing'.  He was so proud of what he'd produced. 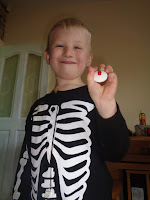 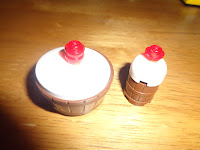 We had to amend these lollies from the designs due to lack of bricks but as the boys had learnt by this point, that was OK.  The book was ideas and suggestions not rules like set instructions.  If you need to change the model that's ok.

Noah loved building the 'Tropical Pop' and 'Blueberry Pop' with some guidance from me. 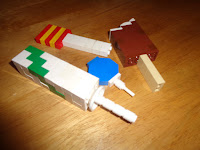 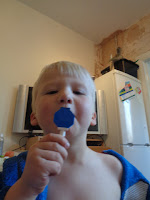 Both boys really wanted to make the chocolate box but the reality is we really don't have a lot of brown pieces.  They each looked at the page and choose their own designs to make which we grouped together with a couple of 'Liquice Stacks'.  They also wanted to make the box.  This was very interesting as by now we really were short of pieces hence it is very pretty and multi-coloured.  The inside was supposed to be split into sections but there were very few smooth tiles left to be able to finish it off.

Ok so the box isn't exactly as the book told us to do it .....  but that's the great thing - the book gave us the ideas and the boys creativity completed the build. 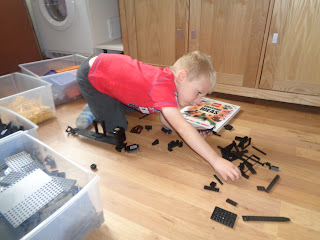 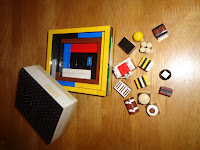 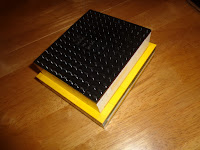 My boys aren't very obliging when it comes to videos (and from someone who prefers to be on the other side of the camera I don't blame them) so here's Keji and their Wild West Saloon.

We had a great weekend, I think the book also encouraged me to play with the kids more as I found it more interesting then building another fire engine or Batplane.  I'm also really impressed with the way it's boosted the boys imagination with even Noah creating new models he'd not have thought of before this week.  The LEGO® Awesome Ideas Book would make a great Christmas Present for a child who has plenty of bricks.

*©2015 The LEGO Group. Produced by Dorling Kindersley under licence from the LEGO Group.
Posted by Scouting Mummy at 23:11