Hello Gran, how are you?
How do you feel today?
I just came by to see if I could be of help in any way?
I always like to come and spend my time with you
You somehow seem to think of something great to do 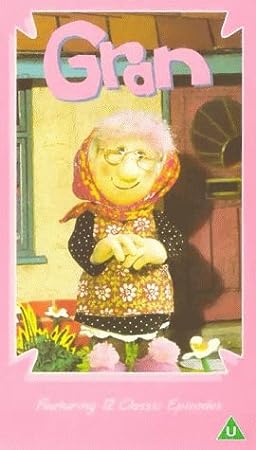 Gran was an animation television series narrated by Patricia Hayes and directed by Ivor Wood.   It was one of the shortest animated series of my childhood, only 13  five-minute episodes were made in 1982 and broadcast on the BBC in 1983.  As I would only have been a year old it must be the repeats shown in 1986 (and 1992 that I remember so fondly (that and the Video I got when it was released in 2005, now discontinued).  If you remember Nickelodeon's US series Eureeka's Castle the episodes were also aired during this.


There were only two main characters, Gran and her grandson, Jim.  Gran was no ordinary woman, she gets up to some crazy stunts such as hang gliding or digging for old dinosaur bones, goalkeeping or cross country motorbike riding.
None of these would be Gran tho without her pink slippers!

The episode I remember clearly is Gran Knits, where she knitted a scarf to keep her warm, but in typical Gran style this was no ordinary scarf.
The others were: A little bit of extra trivia....
Gran made me think of Granny Dryden in Postman Pat.... perhaps because Ivor Wood created both?  This could be more than a coincidence tho.  In one episode of Gran, "Gran's Bike" "Alf the butcher" arrives on a familiar motorbike... why so familiar?  well the model of Alf went on to become Peter Fogg in Postman Pat and the bike .... Peter's bike.