As  a mum I love to get my kids out of the house and off for a walk, most Friday's you'll find me sat on the laptop whilst they are at school trying to find somewhere new to go or even an unknown walk  with things to see and do around Sheffield.

When I was told about Manchester's Urban Hike that Regatta launched earlier this month (working alongside Anja Phoenix).  I was intrigued, so me and the boys set off for Manchester on a glorious summers day to find out more. 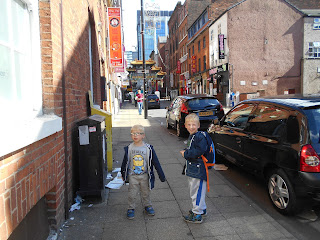 What is an Urban Hike?

An Urban Hike is a walk through the city, letting you explore your surroundings and notice things you might otherwise have never known about. As the Autumn draws in muddy woodlands and steep mountains will soon be off the radar so trails that follow real roads and footpaths are perhaps the best way to get out and enjoy the fresh air.

Following the success of their Urban Hikes London (which is still available) Regatta looked for somewhere else that screamed 'Adventure'.  Manchester fits the bill perfectly … a booming city of musical devotion, industrial rebirth and colourful quarters.  Each part of the city has its own personality, from the gritty industrial heritage of the Ancoats area to the vibrant and lively Canal
Street. This 5km trail takes in many of the famous sights and quintessential Mancunian landmarks found throughout the city and also ventures into the hidden alleys (or ginnels if you’re local) and quiet waterside walkways less travelled.

It certainly opened our eyes to a a whole other side of Manchester that we'd have never know was there and one we can't wait to go back to.

The hike starts from just outside Manchester Central library in Saint Peter’s Square. This is easily reached from Piccadilly station on the free Metroshuttle bus, route 1 or on foot.    Our train pulled into Oxford Street so we used directions from googlemaps to walk to the starting location, it really is an amazing building. 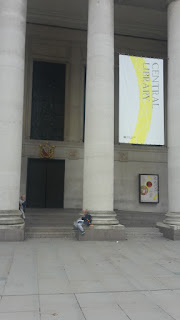 The route is split into 3 areas, each a section of Manchester's history.  It is recommended you take 2 hours to complete this walk, however if your sense of direction is as bad as mine and your children as nosey and slow as mine give yourself a whole day.   After an hour and a half we had only just finished section 1 and started section 2 before we had to break off as we were meeting friends on the opposite side of the city.

Here's our adventure on that stretch of the journey.......


1) From the Central Library we headed towards the Manchester Art Gallery.

This bit of Manchester is heavy with roadworks at the moment which takes away some of the beauty of the area.  It was also not the only time on the walk I wished I'd had a Manchester street A-Z with me, but you'll hear more on that mini-adventure later.


2) The next step directed us into Chinatown, the kids couldn't believe it was the same city.  They gazed in wonder at the amazing colourful archway and the newspapers and shop signs all written in Chinese. 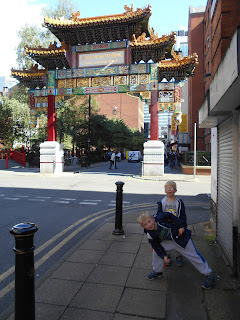 3) Another part of the city next, Manchester's Gay Village.  At 5 and 7 my boys aren't really aware of what "Gay" means and although I'll tell them if they ask and when they are ready this is was just another area to explore........... or it would have been ...... had it not been Pride Weekend!!

Yes that's right the Gay Village was all closed off with security guards in preparation for the Pride events that day.   "Where are you trying to get too?" I was asked (obviously we weren't there for the celebrations), "ermmm I don't know, I'm following this written route".
And that's how we missed a whole section of the first route, fortunately a read of the instruction let me know that the route could be amended - I just had to get to Piccadilly station.  (can you see now why that A-Z would have been handy).   Fear not I hear you say, don't you have a smart phone with GPS on?  I do, so that's what I did, set the destination for the station and followed the map.

WARNING:  Let me give you a word of advice about Manchester and GPS.  It's useless!  Well that's not 100% true, some phones in some areas work really well.  Mine worked fine for getting us from the Gay Village to the station, however remember me saying I was meeting friends after, well according to my phone it was a 30 minute walk, after going round in circles (no honestly we did 3 times!) I gave up on it and we got to our destination over an hour later.   This appears to be a 'thing' as my friends phone works fine for directions but her cars GPS drops out, we believe its the height and denseness of the buildings that cause this.

4) And so we arrived at the station, I was back in my comfort zone as this is one area of Manchester I actually know.  (well when I say know, I've walked past it a few times to other places).

Little did I know just what a different world was around the corner.  A mix of Manchester’s industrial past, with former cotton warehouses and red bricked buildings sitting alongside newer
building and apartments.

There is the most fantastic old signage and advertising, painted onto buildings like this one for  “H.A.
Howard & Sons Ltd.” 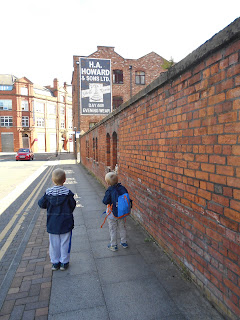 5) Walking a bit further we started along the Ashton Canal towpath. It’s hard to believe that
this peaceful walk was once at the forefront of Manchester's industrial corridor, serving as an important regional trade link.
The boy's day was just about made as they got to watch someone opening the locks and going through. 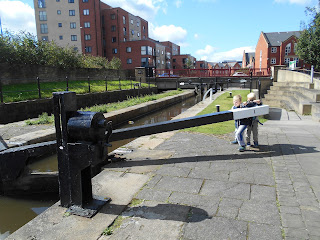 6) Continuing through the marina area, you arrived in the New Islington area with it's distinctive
street lights.  This area of Manchester is undergoing extensive redevelopment.  We loved this herb garden that the building company had put it, what a lovely idea, there is a sign encouraging you to try them. 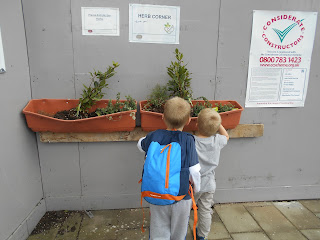 7) The Ancoats area of Manchester showcases more of its industrial heritage and beautiful former cotton mills ….. hidden amongst these are the Ancoats Peeps!   And they really are hidden it took the boys ages to find one.

The Peeps are brass peepholes set into walls amongst the buildings and structures of Ancoats, and
provide a glimpse into the area’s industrial past, we managed to find 2 between here and when we left the walk I don't know how many there are in total. 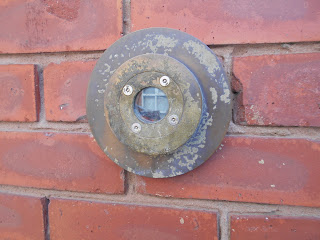 They are a little too high for them to see in properly so make sure you have good muscles if taking little children.

And this is sadly where we had to abandon the walk.  We're off to Manchester again this weekend for the Stitching, Sewing & Hobbycrafts Show, if we have time after I am hoping to pick up the third part of the walk which includes Piccadilly and King Street before heading back to the Library via the Town Hall.

Our Hints and tips

DO
Take an A-Z street map unless you know the area well . There are many roads without names on and should you have to take a detour like we need it'll become invaluable.

Look out for your next landmark, this saves you reading the 'map' the whole time.

Take drinks and snacks with you as you are not always in arms reach of a shop.

Take your time and take in the sights.

DON'T
Rely on your phones GPS if you get lost.
Be too worried about sticking to the path, if you want to explore a side street, or grab a coffee in a local cafe then go for it.

The Urban Hike map can be downloaded here.  This prints out onto 2 sheets of A4.  You can also pick up the official map from the Central Library (see website for opening time),


To find out more about Regatta Outdoors or the Urban Hike follow these links.

***Disclaimer:  We were gifted some Regatta coats as part of this review, however the review is our honest opinion***


This review also features on my Scouting Blog Scouting Mummy,  please check it out.