Mmmmmmmm Chocolate ........... from the moment you enter the car park that amazing smell hits you and stays with you for the entire visit.

I like most chocolate, but Cadbury's has always been up there as one of my favourites.  I remember going on a trip to Cadbury World when I was really little so when my mum asked if I wanted to go again with her and the kids my inner child very quickly replies yelled "yes please" (tho probably not as fast as my 2 boys did!).

You need to book for the 'tour' element, to ensure there isn't a crush of people as you make your way through the chocolate experience, it is a self-guided rather then a led one.
Before you start you are given 3 bars of chocolate each, today's were Crunchie, Curly Wurly and a Dairy Milk.   I loved this tour, however people cannot be herded like sheep and of course it bottlenecks in places.   There is an activity sheet to complete as you move through the displays which the children enjoyed doing,

The tour was far improved from the one I remembered, holograms guide you through the history of Cadbury's until you meet some historical figures who tell you a little bit more.   This element was tricky to hear as there were people in our 'group' who insisted on talking (loudly) to each other over the entire thing and even tho we were close to the front the voices got lost.  It was a shame for those attending and for the actors.

After a brief history you are escorted into a small cinema for a little bit more history, before becoming a cocoa bean in another cinema experience.   The tour was long for small children and I could see Noah's (5) attention trailing, Phoebe and Ben (7 and 9) were a little more interested especially when they were being roasted and made into chocolate. 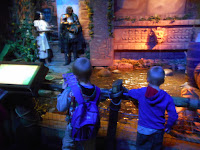 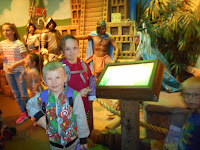 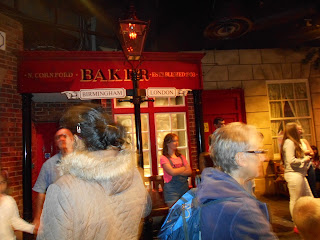 Once you enter the main factory you see the packaging plant, which isn't really as interesting as it used to be as the majority of work now is done by machines,  you do meet (well behind a glass screen) some real people when they are iciing onto chocolate.

You get to make your own chocolate, when  I say make your own you have a cup of liquid chocolate and you can choose 2 ingredients to put in it (Crunchie, popping candy, marshmallows or white buttons).  I went for Crunchie and marshmallow, and it was really good (fingers crossed this one is released some time soon, I'd buy loads).  The chocolate itself was really rich and creamy....and sickly sweet. 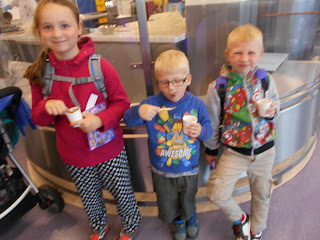 Round another corner and you get the Cadbury ride, this is the main element I remembered from when I went as a child.  A little car (Beanmobile) that takes you through the world of Cadbury beans and characters relaxing in their own environments.  Watch out for Mr Cadbury's Parrot.

Cadbury's adverts are brilliant aren't they ...... Mr Cadbury's parrot going berserk, the Caramel bunny taking it easy, the 2007 drumming gorilla, falling into a bath with a Flake and of course the OAP's who move the car in the Roses advert....... well they are all here in the advertising avenue.  Their biggest advert of all time, the Chocolate Coronation Street is also immortalised for you to walk through.   A great burst of nostalgia. 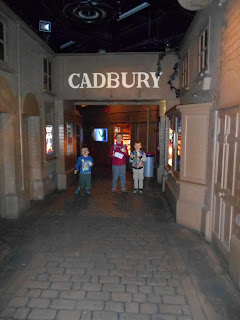 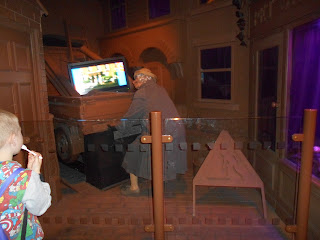 The Purple Planet is an interactive experience for children,  However aside from jumping on Creme Eggs they weren't that interested.  Perhaps we missed something? 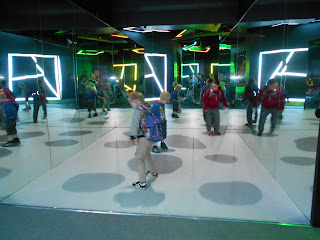 I was very excited about the 4D chocolate adventure which is exciting and fun, you dive into chocolate, fall from the sky and ride the Cadbury Rollercoaster.  We all loved it.  However the length of the queues was not amusing.  You cannot book for this experience and as you have to take a lift to the cinema only 5/6 people can enter at a time.  We waited 45 minutes - 1 hour (by which time the children were very bored), this was nothing compared to the queue at lunch time which was easily 2h long.
It wouldn't be difficult for Cadbury World to book time slots for the 4D cinema when you book the tour, it can be done before or after your experience so suitable times could be booked in.

We really wanted to go in the Bournville museum and have a walk around the village but due to the time wasted queuing for the 4D cinema we ran out of time for this.

It is pretty big.  With plenty to choose from, I was disappointed in the Factory Shop as the prices weren't much cheaper then buying anywhere else.
The bars themselves were no more expensive then shops and I managed to pick up some much missed Time Out bars on 4 for £1.  I also got an 'I Love Cadbury World' tote bag and a Mr Cadbury Parrot keyring, as well as a chocolate lolly for the boys to take home for daddy.   Grandad's Father's Day (yes, I know, a few months late but I've not seen him for months) was also covered with 3 packs of Bassett's sweets for £3 and a Bertie Bassett mug. 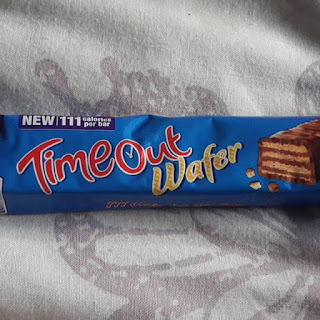 The kids loved the huge play area, although the day was let down as my niece got bitten by a child who was climbing up the slide.  Not Cadbury's fault as it is parents responsibility to supervise their own kids, just a shame that this family thought that an appropriate way to act.

Before going to Cadbury World we had a discussion about whether to take a picnic or to buy lunch there.  Normally one for taking our own wherever possible (to save costs) the Cafe was so reasonably priced our decision was swayed.   2 adult and 2 kids meals, with drinks, was £24.95.   We got some great thermal cups for the adults and soft drink beakers for the kids when we arrived as well which were a bit more pricey but are going to be great for camping.

Becky was really helpful taking one of the meals to the table for us as we had to wait for some more nuggets and getting us some sauce and cutlery.  However the Cafe as a whole was understaffed, there was no-one to pay at the food till and when someone did arrive they were very confused how to operate a till.  They were however apologetic and friendly. 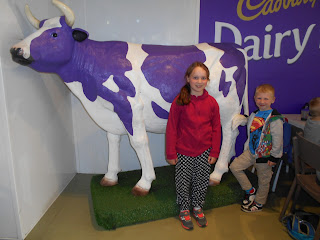 On the day we visited Cadbury World had a couple of magic shows going on, we were lucky enough to be told about this on our visit to the shop so took the kids along.  I think we enjoyed it just as much as they did.

John put on by far one of the best magic shows we've seen in a long time, and Ben is still trying to work out how the 'baby' cried.
Now I've discovered him and his wife are based in Sheffield I'll be recommending him to all who ask.  Planning ahead to next year I wonder if he's free for Ben's birthday...... 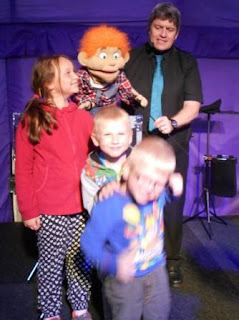 All in a all it was a great day out,  A family ticket (2 adult, 2 children) is £49.96 which is very pricey for what you get there, however for a one off experience it's something everyone should encounter at least once.  Defiantly leave yourselves enough time tho, we had a 3h car journey to get there so booked our tour for 12, you do need to book in advance as if you turn up on the day there is no guarantee there will be tickets available.  We were there for 5 hours but could have done with another couple. 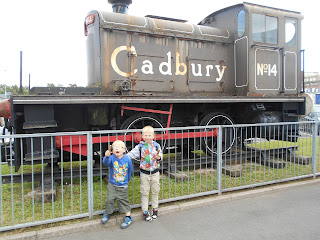