Back in 1998 Emma Chichester Clark wrote the first of her Blue Kangaroo books, "I Love You, Blue Kangaroo!".  A delightful story about a little girl called Lily and her favourite toy Blue Kangaroo. at least he was her favourite until Wild Brown Bear comes along, and Yellow Cotton Rabbit, and the Furry Puppies, and then more and more new toys, until Blue Kangaroo feels there just isn't room for him any more.  The book won the Grinzane Junior Award and was shortlisted for the Kate Greenaway Medal.

4 years after the last of the Blue Kangaroo books was released Emma has a new title out and has re-released 2 of the old favourites. 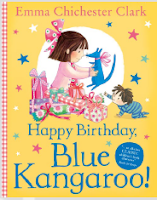 As the boys grew up we read loads of books, one of which was "Happy Birthday To You, Blue Kangaroo!"  They loved it.  In this book Lily and Blue Kangaroo share everything, even birthdays. And for her next one, Lily decided that everything must be pink: pink invitations, pink party clothes, pink wrapping paper... Even Blue Kangaroo gets a pink ribbon to wear. He isn't sure that he likes it, and once everyone starts to arrive, all dressed in pink and carrying pink presents, he thinks that Lily would prefer him if he were pink. He gets so miserable, that he creeps away. But Lily misses him, and comes to find him.   She shows Blue Kangaroo that friendship is far more important then colours.   This book has been re-released this year. 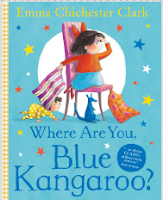 The other re-release is "Where Are You, Blue Kangaroo?".  Lily loves Blue Kangaroo, but she often loses him and sometimes Blue Kangaroo wonders if he’ll ever see her again. Luckily, Lily always seems to find him, but what if one day she doesn’t? 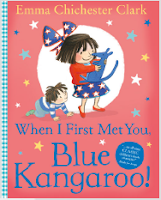 "When I First Met You, Blue Kangaroo!" talks about how the friendship of a lifetime began back when Lily got a new baby brother, she soon discovered that it’s not easy learning new things and helping to look after someone so small. But when Grandma brings her a very special surprise; someone who also needs to be cared for – Blue Kangaroo her life has a meaning!


The covers of the books are really lovely, modern but still eye catching for children, it's clear they are part of the same set.  The story is laid out with beautiful illustrations and just the right amount of words for a 2-5 year old to listen to.  There is plenty in the pictures to talk about which is vital for a young reader.  When you've finished you have the context of the book to discuss whether it is sadness, jealousy or fear. 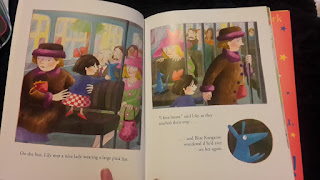 From a first glance at the books you would expect them to be very girly orientated, but my 2 boys both enjoy them.  Noah (5) loves to sit with one and read it to himself telling us what happens and Ben (7), although he won't admit it usually has at least one ear on the story. 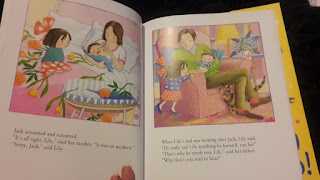 The books are published by Harper Collins and are out now with an RRP of £6.99 each.


Disclaimer:  We were sent  3 Blue Kangaroo books free of charge to read and review.  The review is our honest opinion.
:
Posted by Scouting Mummy at 23:10