Northern Rail plan to introduce New PEAK ticket prices ..... will you be affected

As non-car drivers you will be aware that we do a LOT of travelling by train.  We have a family and friends rail card and love to go for days out.

Fortunately most of our outings fall on the weekends but there are times, like this weekend (or during the school holidays).  We considered going away for a couple of night when the kids finished school tonight (meaning travelling out of Sheffield after 4pm).  Additionally if we do go on a day out in the week we tend to try and get back to Sheffield for around 5pm so enough time for tea and bed with out rushing our day out.   Today I have just spotted Northern Rails plans to ruin our days out by increasing ticket prices in South and West Yorkshire, Greater Manchester and Hexham-Newcastle.... so all the routes we frequently use...from the 8th September.   They say they have given plenty of notice of this including announcements on affected trains.... well I must have slept through my return journey from Manchester last week because there was NOTHING about this change - no posters, no announcements - if I'd not seen it on Twitter today I would not have been aware.  You would have expected when I booked my tickets (and I can't remember who I booked through) a month ago that some notification of the change would have been sent, but not that I can see.

Anyway I am jumping ahead of myself.... the new plans for are travelling on a weekday train in Greater Manchester, West Yorkshire and South Yorkshire from 16.01 - 18.29 or between Hexham and Newcastle from 16.01 - 17.59 you will have to buy a new, more expensive, peak ticket.

What they have kept very quiet about is the price of this new ticket in relation to current prices..... so I went to find out for myself.

For a family of 4 (2 adult, 2 children with a railcard) travelling to Manchester - which we do probably once every couple of months (lets assume leaving Sheffield at 10am and returning on a train about 4.30)....


A WARNING
I have looked on both Northern Rails own website and TheTrainline.com and BOTH allow you to reserve tickets on the return journey on an OFF-PEAK ticket!!!  I don't know about you but I always book the cheapest tickets that are offered. In my opinion if it shows I can book it it must be valid. 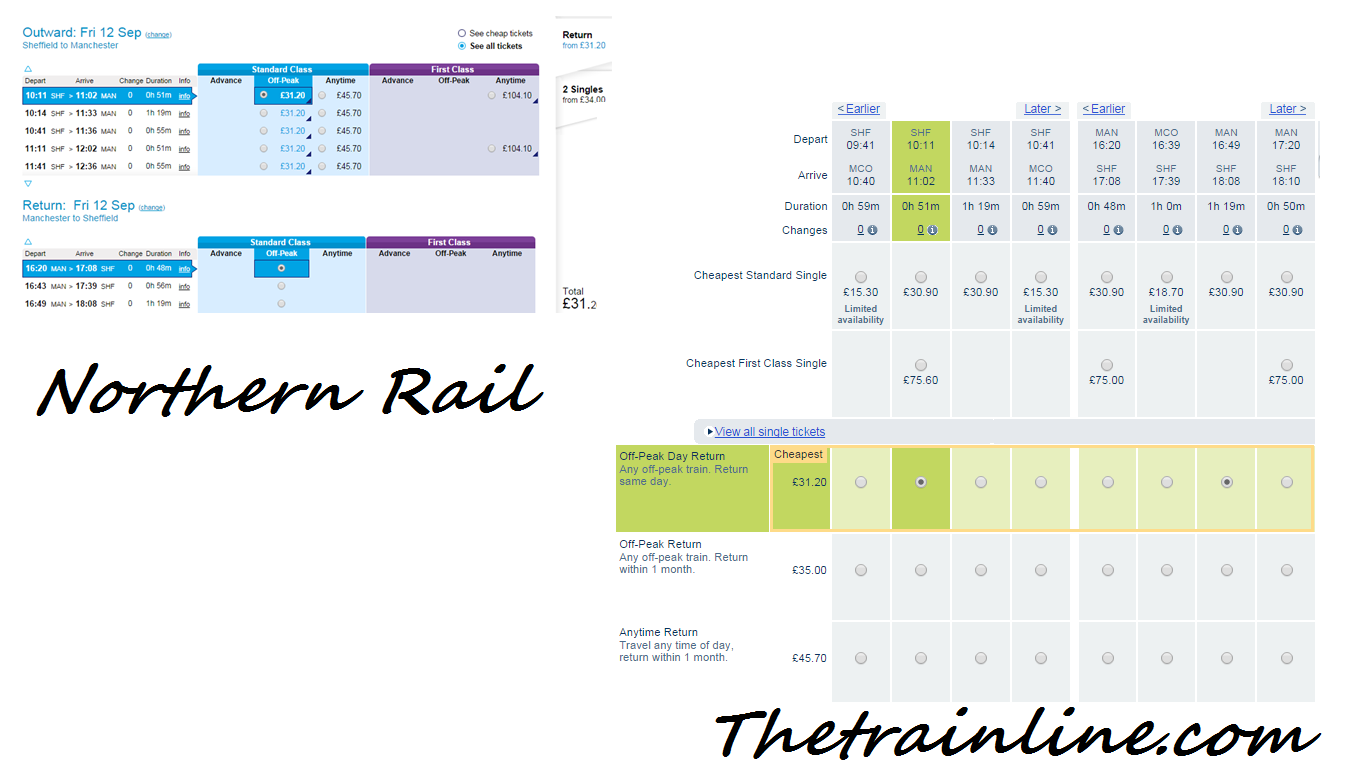 Now should we look at London.  I love London, and with the highspeed rail running through Sheffield and taking just 2 hours to make the journey it's a trip we are saving up to do.
Now as it's that bit further we would need to leave Sheffield at 9am... and the return leg at 4pm....

Again both website suggest you book the Off-Peak tickets... but we know this would come with a hefty fine on the return journey.  Suddenly the price rockets from £187.90 to a huge £316.20, this is a journey we now could never make during the week unless booked well in advance on saver tickets.

Well according to Northern Rail it is to reduce the cost to tax-payers for funding the railway .... how ... buy asking taxpayers to pay more to travel... now THAT's logic for you!!!

I wish I could vote with my feet on this one but like I said if you have no car then long distance journeys really are only do-able on the train.  It's going to mean that next Summer the 6-week break will be non-existent as we'll not be able to go on the trips we did this year.  It's a huge shame but not one that Northern Rail are overly concerned about, after all we are just ££'s to them.

So Northern Rail eventually agreed to give me a sensible answer to my query about tickets.  After telling me to go and look at this site, which is actually really great as it tells you different fares set by opperators - you may find my travelling on Arriva instead of Northern (for example) to your destination you can save ££'s.  The second thing they told me to do was look at the red maps on their site for info as only travel on these routes are affected.  I pointed out that I had looked here and (as an example) both Sheffield and Manchester are on the maps.  The difference I was informed is.....

@chickywiggle The journey has to wholly start and begin in the same zones, so no. You are crossing boundaries. It is off-peak still.
— Northern Rail (@northernrailorg) September 5, 2014

Now THAT makes a lot more sense, doesn't it.  We rarly make short journeys in the boundaries (but I do know people who do every Monday-Friday) so won't be affected quite as much **phew**.

Are you going to be affected by Monday's new structure?