Ambleside is a must when you are in that part of the lakes, especially when, like me, you lived there for 3 years.  It's more a town then a village with more outdoor shops than anyone will ever need, quaint little cafes, tons of B&B's, a large park and a good sprinkling of pubs, not to mention a Boots The Chemist (where I worked in my student days), a Tesco Metro, Co-op and Spar shop. How to get there?

It's 5 miles from Windermere, however the paths are non-existent a lot of the way so even for a walker it's not the easiest route.

If you drive there is a pretty large car park, however it is served by many buses making getting there, or travelling onwards easy.  On a fine day you can get the open top 599 bus from Bowness through, the boys thought this was great fun despite the freezing weather,
.

We bought a Stagecoach Megarider Gold weekly ticket (£26 each... ouch)  which allowed us to go anywhere we liked (within reasonable boundaries), even covering our bus to Penrith.  Sadly this is where the border ends and we had to pay between Penrith and Carlisle.
It worked out great value for us as day riders are about £8 each and had the advantage of not needing to find money every day for tickets.
It's worth noting this may not always be the best value for you - they do boat and bus day riders as well as 3-day tickets that cover a larger radius.  The best thing is to pick up a timetable that are readily available at Windermere station and detail all the tickets and boundaries in detail.

For this reason we spent a far bit of the holiday there, usually waiting for a connection

When I lived in Ambleside we had a lovely nightclub called "Sporties", this was situated below Sportsman Inn.  With students gradually being forced out of the village in recent years it's had a revamp and a name change and is now the Ambleside Tavern featuring the best value meals a family can buy in the area in a pleasant child friendly atmosphere.   According to Facebook they have noted the return of the students and have reopened the 'club' as well.

We were pleasantly surprised at what good value the meals were considering it's location.  They offer 2 great options, for walkers you can enjoy 2 meals for £12 from an intensive menu (not your normal choice of a handful of dishes) or for families Kids can eat free with any main meal purchased.  With the average price of an adults meal being £7.50 we ate (and drank) for less then £25!

So what did we enjoy here?  Noah had Sausage and Chips, Ben had Chicken Nuggets, I had really succulent Scampi and hubby went for Gammon.  I tried a bit of everything and can honestly say it was delicious.

The boys were really pleased that the pub was quiet and they were able to get a game of Pool in on the well kept table for just 50p a session.


Ben asked on a couple of occasions to go back here and we will.... one day.

We had 30 minutes to pass while travelling through Ambleside between Bowness and Penrith so popped into Esquire Coffee for a drink.

Now considering how much our entire lunch cost us in the Tavern you may be almost as shocked as I was to discover this place cost me £3.30 for a milkshake! The range of milkshakes to choose from is excessive, you can pretty much have anything you want (except Banana, they'd sold out of that) - so we choose 3 flavours to try - Caramel, Chocolate and Raspberry while hubby went for a Mocha.

The milkshakes were nice but they were nothing special, flavour wise they were actually pretty dull. Because of the way they are made they're soo cold, they do warn of brain freeze and weren't wrong, We were unable to finish them in the time we had there and ended up leaving quite a bit as too bundles with bags to take them with us. It's not somewhere I'd return to.  The Mocha was apparently lovely tho :)

Besides shopping and walking you have the Rock Shop with have many activities for kids to do.  Ben was desperate to go in the Dinosaur Den but time wouldn't allow.
There's also the Armitt museum, but again we didn't go there, a cinema or let the kids burn off energy in the large Park/ playground.

Don't forget to visit the Bridge House too. 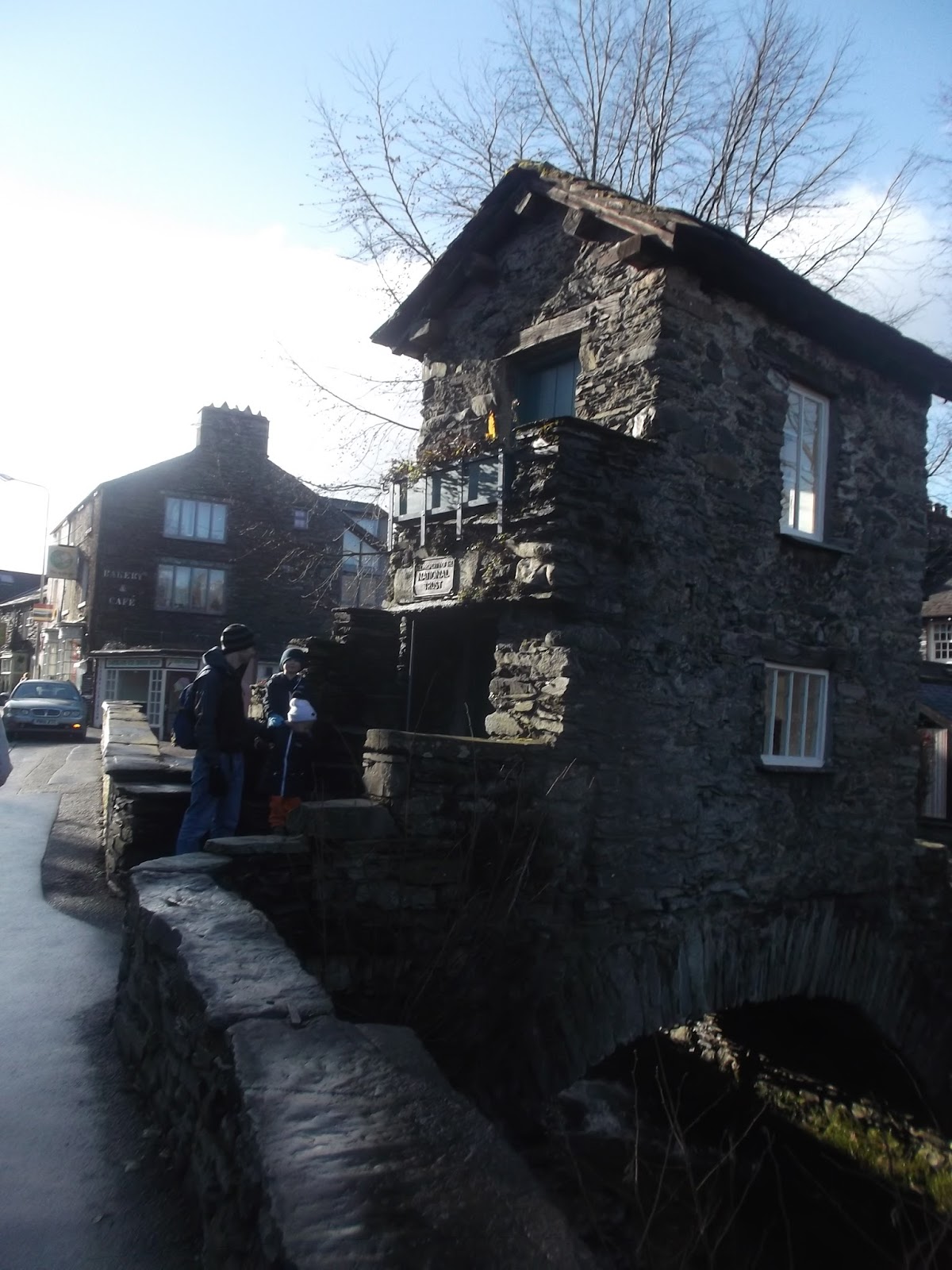 We took a HuntFun treasure hunt with us to complete which not only kept the kids walking but also got them taking in their surroundings and caused one or two arguments between me and hubby over which direction it was telling us to go.  It takes you around most of the tourist attraction of the village as well as some areas I'd not even been in while living there I'll be reviewing both the Ambleside and Carlisle HuntFun experiences on a separate post.


Disclosure:  The only sponsored content on this post is Huntfun who sent me a free treasure hunt to try.
Posted by Scouting Mummy at 11:30