Here we go 'round the mountain
singing our very own song.
When we're on our way
we shout "hooray!"
With a rat-a-tat-tat and a bing bang bong. 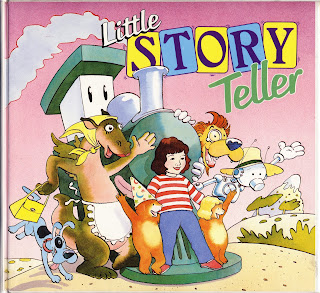 I guess I'd better go back to the beginning for those of you who have no idea what I'm talking about.  Back in 1983 Marshall Cavendish had a great idea, to release a fortnightly part-work magazine which contained stories, rhymes and activities all accompanied by a tape.  I have fond, yet hazy, memories of this series.

In all this was probably one of the biggest part-works published, there were three series of Story Teller (1, 2 and Little). Each series had 26 issues as well as three bumper Christmas issues (I can almost start playing these ones now with 15 weeks to go) and one song book.


I distinctly remember having Little Story Teller issue 2 which would have been released around 1985 - I can hear My Naughty Little Sister - The Unexpected visitor being played in my head as if it was yesterday and the illustrations that accompanied it.  I remember The Naughty Paintbrush from issue 10, that story was fantastic.  But for some reason I didn't have the tape boxes for Little Story Teller, I had the red box from the older children's set Story Teller.

Most of the stories were narrated by people who have gone onto make household names for themselves, how many of them do you recognise?

and many many more

I was really lucky a couple of years ago to obtain the digital set of Story Teller and Little Story Teller which had all the mp3's for the stories and pdf's of the magazines, me and the boys love to curl up in the evenings to listen and read along, or they go to bed listening to the stories.  Unfortunately the distribution of this dried up due to copyright laws, please don't ask me to send it to you.

Of course we have fairy tales and Gobbolino in their own books, but it's just not the same:)  I really wish I had the real magazines so we could curl up instead of sitting around a computer or tablet, but when they are fetching £50+ a set I don't think it'll happen any time soon, I am of course keeping eyes open in charity shops in the hope someone may part with them and they won't realise their worth. 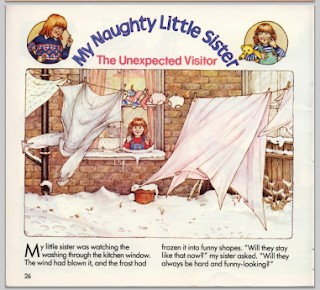 Marshall Cavendish have sold the part-work to Eaglemoss and there's a campaign for them to re-release the fortnightly magazines with CD's ........ it's 30 years later and there's no sign of it occurring yet but we can hope.

If you are on Facebook please join the fantastic Storyteller group, without them this memory would have remained just that.

You may also want to pay a visit to The Magical World of Story Teller for more information on the series.

There are many many of the stories and magazines on YouTube if you want to check any of them out, my boys love to put this on the TV app when they can't listen to the CD's.

You remember I said The Naughty Paintbrush was one of my favourites, watch it and all the other greatness of Issue 10 here.

**ping** - wonder what that noise is during this video?  That's your cue to turn the magazine page :)

Do you have fond memories of this or another childhood collection?  Please share your memories.

*Thank you to the Facebook group for giving me permission to use their images.