Should our children be taught to be competitive?

Should our children be taught that competition is only ok in certain circumstances and subjects?

This Tuesday was Ben's 'sports day', one of only 3 days of the year where I take time off work to go to school and see him achieve something or perform to the best of his ability.  But this year sports day was very different, we were told that the head teacher didn't believe children should be competitive any more.  I almost thought I had misheard but no, sports day was going to be a team event rather then individual competition.    They had all survived their Reception sports day unscathed (Y1 was cancelled) but now they are in Y2 we are being told that children cannot cope with disappointment until Y6 so sports day will be changing.

This year the children were split into teams of 9/10 children and would be scoring points towards a team total at individual activity stations, when the time was up someone else went to that activity and you moved on.  Let me share how sporty some of these were with you....

Throw a bean bag in a hoop.  Depending on which hoop it lands in you get 1, 2 or 3 points for your team. 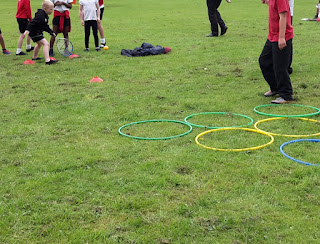 Hold a baton, go through a hoop then jump over 2 hurdles. 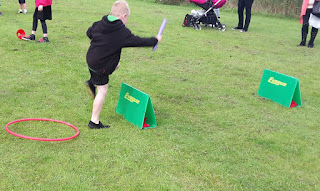 Game 4 was actually quite challenging as the children had to go under an army net.  This actually made them stop and think about tactics and work together ... some more then others as Ben persuaded 2 members of his team to hold the net up so it wasn't dropping on him..... some may call this cheating others genius! 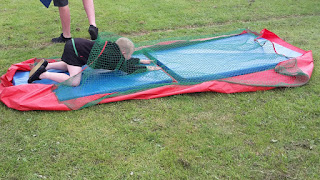 A baton relay race, over the shortest distance possible. 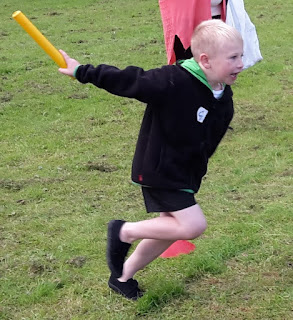 A skipping race.... which had a couple of children who couldn't use a skipping rope close to tears. 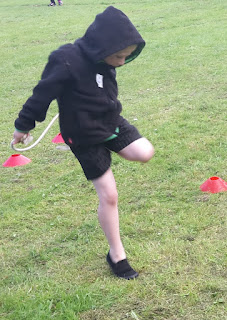 By this point it was starting to rain, the kids were cold and they had 15 minutes to go back to school (a 5 min walk as the activities are not on the school premises) and get changed for home time.

And which team won?  who knows - I've asked him again today and apparently they've still not been told.

So what have the children learnt?

Techniques - not really, there was no teaching going on, perhaps they were consolidating skills? 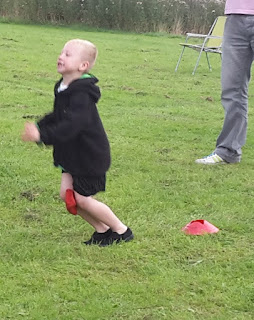 Turn taking - definitely.  However there was sometimes such a long wait for their turn (with 10 in a team) they just got bored and it was up to the parents to supervise them and manage their attention span.  The teachers huddled in the middle of the field during the afternoon while Year 6 children 'ran' each stop.

Exercise - No.  for the couple of running/ moving games they were over such a short distance it took less then a minute.

Fun - not from the responses I was getting from them.  The children dragged themselves from one spot to the next, there was no cheering and, no encouragement to team mates.

Teamwork - not really.  There was one game where they had to get a ball from the front of the line to the back going over heads and under legs but did this really make them work as a team?  I'm not sure.

Competition - none.  They were told that the score to beat was 16 or 15 but the kids weren't keeping count and were only told at the end (sometimes) of that game if they had beaten another team or not.

Your child may not be the greatest runner but then the teacher shouldn't make them do the relay race instead putting them in the dressing up, egg and spoon or the slow race instead.  If they don't come first ....... so what??

Turn bean bag throwing into a competition between 5 children at the same time if that is what you want to do, they learn nothing by taking turns doing this other than kicking themselves and feeling bad for only scoring their team 1 point when the person after them scored 6.  Isn't this just as bad as if they had come last in the running race?

As long as they did the best they could do people praise just as much as the winner.   But shouldn't sporty children get this opportunity once a year to show just what THEY can achieve.  They might know in their heart they will never be the best storyteller, they won't be the best reader in the class and as for sums no chance.... but they can run, they can really run..... but they won't get the chance to be the best at this because it may upset someone else.

There is competition in other things at school - who's writing is the longest?  neatest? most descriptive?  They know if they write a page of great story and someone writes a messy 2 lines then they have done better writing.  They know if someone's drawing/ painting/ or lollipop stick house is better then theirs.  But they are also taught that it is doing your best that counts..... and isn't that what the spirit of sports day is??

Children at the end of Year2 do SATS - some will get better scores then others, if they can't handle not being the best shouldn't we get rid of tests and gradings?  What about when they don't get into their top university?   As adults you go for job interviews you may get it you may not, that's life!!  If children don't learn there are competitions in life what are we teaching them?  How will they ever learn to live with disappointment?

I teach my boys to be competitive at home. They know that if they are on level 40 of a game and the other is on 12 that they are doing better then them, but they also know that it's not fair to name call and brag about this. It could be the other one is further on in another game or has been doing something else that week instead of playing the game.   We play board games, someone wins someone looses, it's how you approach this, the taking part, and the lessons learnt that matter.
Shouldn't schools also share the same approach?

The school has Golden Assembly once a week where 2 or 3 children in every class are praised in front of peers (with their parents invited) for doing something really well, but rarely is this a sporting achievement.   How is that fair???


I hated sports day, I was rubbish and I knew I was rubbish .... but one year I won my race and that day was probably the best day of my school life.   I'm not scared by having lost year on year, I know that I was far better academically then the child that won every race... I was the one who was chosen to be the star of the school play not them, and I was taught that that was ok.


These children could be our future Olympians .... bring back competitive sports day!  Let's celebrate how Every Child is special in their own way isn't that what growing up is all about? 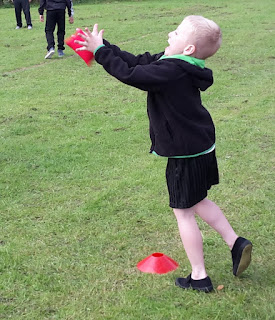