Made In Sheffield: El Toro

Hidden away in Broomhill, Sheffield, is a little gem of a Tapas restaurant called El Toro.  I recently got talking to Eddie, the owner, about Tapas as we're not generally a family who are that adventurous.  If it's not plain and simple then picky 1, 2 or 3 will refuse it.  Eddie assured me we'd not be disappointed and invited us to go and see what they have to offer.  He also took the time out to chat to me about the business and his menu inspirations, and provided a lovely giveaway.... read on to find out more.

El Toro was established in 2008 with the aim of providing fresh, homecooked Tapas in a relaxed environment in the centre of Sheffield.  Six years later Eddie, while maintaining his head chef hat, took over the management of the business when the owners hung up the rains to start a new venture.
Eddie has made some changes to the menu to introduce some of his favourite foods but also serves up simple bacon sandwiches and savoury tarts alongside some of the biggest and best meringues I've ever seen all made freshly, daily, on the premises with the best seasonal ingredients. 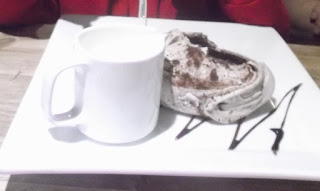 Growing up in Colombia Eddie has experiences the best Tapas has to offer, learning lots of techniques and styles from his own parents, his Beef Estofado in rioja takes his mums secret recipe and puts it onto a Sheffield plate.

We went to El Toro to try their evening menu. 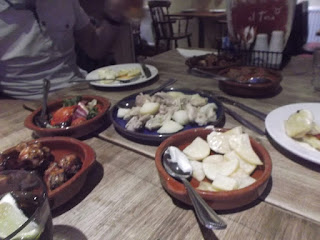 They have an Early Bird menu which is served between 17:30-19:00 and offers a choice of 3 tapas from a select menu and a drink for £12.50. This includes some great dishes, we chose meatballs (albondigas) which were succulent very morish, chorizo and tomato and potatas ailoi (lightly fried potatoes covered in a warm garlicky mayonnaise sauce). 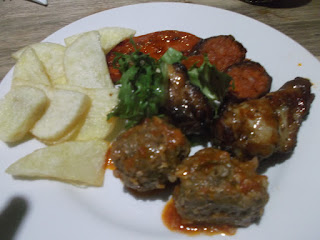 We picked a few items off the normal menu too, these are around £5 a portion and we found a couple of dishes more than enough to complete the meal.  The BBQ chicken wings had the best flavour I've tasted with a really sticky sauce.  As I don't like garlic I ordered some potatas bravas  which come in a spicy tomato sauce and accompanied the meal perfectly. 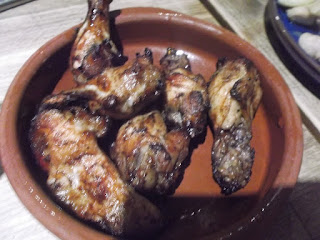 The boys were a bit wary as they'd never tried the food before, of course they've had meatballs at home but other than that these were all new experiences.  Noah (4) took a bite of chorizo and I think it may have been a bit too hot for him as he refused to eat anything else .... we did eventually coax him round to trying a meatball and some potatoes and he seemed to enjoy them.  Ben (6) was a bit more adventurous, but was disappointed we wouldn't let him have the whole bowl of chicken wings.

Of course no meal would be complete without desert and El Toro certainly knows how to do dessert.  They have regular favourites like the flavoured meringues I mentioned earlier, waffles with an amazing choice of toppings, chocolate brownies and fragipane fruit tarts.  They also make new and exciting cakes daily to tempt you. 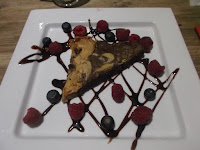 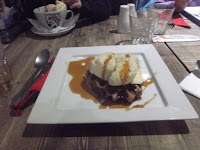 They are also more than happy to accommodate your wishes if they can.  Noah was adamant he didn't want any desert (this is a 4 year old who eats waffles like they are going out of fashion) so when the waitress offered him just ice cream his face lit up.... and I do believe it was all polished off. 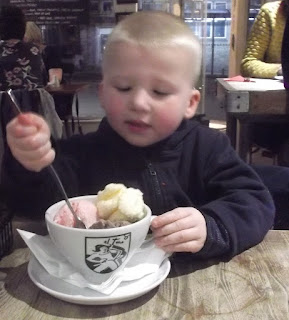 If you are on a vegan or gluten free meal plan El Toro make it really easy to see on their menu which of their options are best for you and there's an extensive selection not just one or two.

All in all we are Tapas converts, in fact the boys have even asked me to make it at home, which is a challenge I'm a little scared to accept after such a great meal.

I know hubby and the boys have been in once or twice since for breakfast and found their bacon sandwiches in thick cibatta bread really filling. 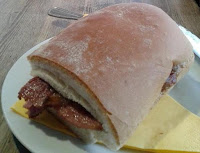 I love the fact they also offer a takeaway option on some of their menu so if you don't have tummy space for desert or want to grab a waffle to eat when you get home they are happy to box it up for you.

But don't take our word for it Eddie has let me bring you this great giveaway for an Early Bird meal for 2, simply enter using the rafflecopter below.  No entries are mandatory but the more you complete the better your chances of winning.

Disclaimer:  We enjoyed a complimentary meal at El Toro and invited to review it, as always the opinions above are my own and honest.
Posted by Scouting Mummy at 21:20