Staying at Blue Dolphin the Haven camp near Filey we couldn't not go here.  So having arrived and pitched our tent we decided to try out the coastal walk.   The 3 mile walk took us about an hour and a half and is well worth it for the views alone. 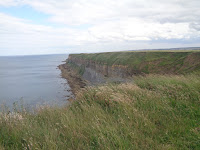 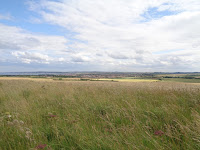 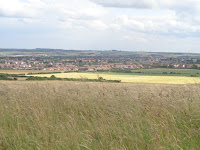 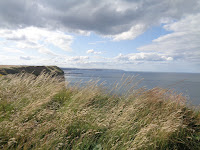 By the time we got there it was about 5pm so there was just enough time for a look at the lifeboat and a quick wander along the beach...... 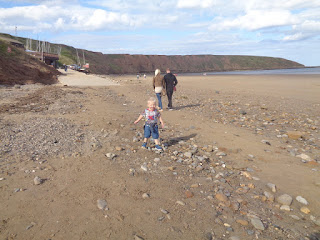 ..... to try and find a chip shop.  Unfortunately because of the way we walked (lifeboat station towards paddling pools) the one chippy at the end of the route was closed.  We decided to walk through the town (village?) and see if anywhere caught our attention, there was a huge choice but none had anywhere to sit so we carried on.  Just when we were about to give up we came across the "First Catch Fish and Chip" shop.  This is a takeaway (with outside seating) and a restaurant.   Being a little caught out as they do not take any form of card payment despite a window sign saying otherwise, we fortunately had enough cash on us for tea for us all, I can't remember the exact cost but it can't have been more than £15 as I know we only just had enough.
Now you would expect being tea time (around 6pm) this would be a quick takeaway.... nope, we were given a number and told to take a seat as they didn't have any sausages cooked (they didn't have anything cooked!).  I asked how long it would be as we had a bus to catch and they couldn't tell us (we fortunately realised there was one an hour later as wouldn't have managed to catch the one we were aiming for).
We had ordered battered sausage and chips each for me and hubby and one portion of chips with 2 sausages for the boys which really confused the staff, they did give us a spare tray so we could split it up which was really thoughtful.  The wait was really worth it as the chips were fantastic, they were fluffy but crispy and the sausages were probably some of the best we've ever tasted. 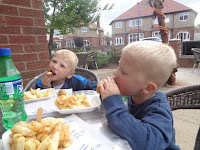 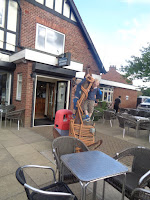 Filled up we had time to go to the large Tesco and stock up on breakfast for the morning.  This is a really handy shop right on the bus 'station' before hopping on the bus back.  Well worth remembering if you are staying in the area and don't want to go all the way into Scarborough.
Posted by Scouting Mummy at 07:30