Having not been to Whitby for years and years I then ended up going twice within a very short space of time.  Once when on holiday with my family and then again last week when we went away with my mum for a few nights.

Whitby has changed very little since featuring in Bram Stokers "Dracula", an ancient port with a working harbour and ruined abbey not to mention sandy beaches with donkey rides, amazing ice cream and fantastic fish and chips.

The town is divided by the River Esk with a ”swing-bridge” across it which lifts to let larger vessals through.

There is so much to do in and around Whitby but we'd have needed weeks to see it all.  Here's my pick of what to do when there if you only have a day.

A long long time ago when I was a little girl the highlight of our holiday was going to the 'Lucky Duck' shop in Whitby.  Every time we went I would come home with a pretty new glass duck, when I went to Uni, my dad went and brought me back a new-style aquamarine one (my birth colour) so I had to take the boys. 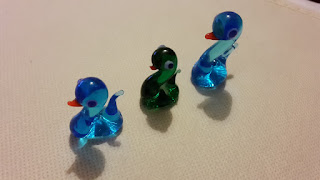 Whitby Glass has been hand-crafting and designing glass in the same shop on Sandgate in Whitby since 1958.  Now, 50 years later they produce not only Lucky Ducks in birthstone colours and 'weatherwise' variety which change colour with the weather, but also Disney products, marbles & crystals, Ornaments and much more.

I was really disappointed that due to 'Health and Safety' you can no longer watch the magic of these ducks being made in the store, only on a TV screen.  There was something really special about watching the man sit next to that huge fire and blowing glass into that magical shape.

When me and hubby came to Whitby the other week we looked at the Abbey from afar, but the second time me, mum and the kids climbed all the 199 steps to the top and visited it properly. 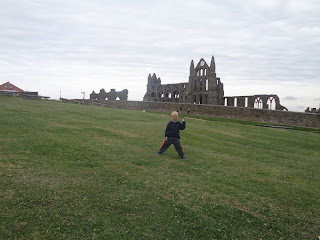 You would have thought after 30+ years of visiting Whitby and walking up to the Abbey that my mum would know everything, so imagine my surprise when I mentioned the numbers on the steps.... "what numbers?" she replied.  Yes, in all those years she had never noticed that every 10th step is marked. 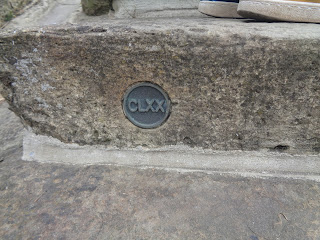 The boys had a great time as there was a quiz for them to do involving various methods of punishment from the olden days.  They had to find the pictures and solve the clues, coming home with a certificate each. 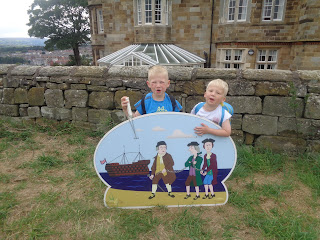 They also took part in a session learning about the plague, learnt about how the stocks were used and how long people had to stay in them for as a punishment and learnt sword fighting skills. 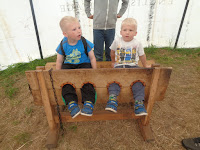 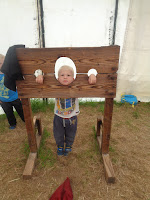 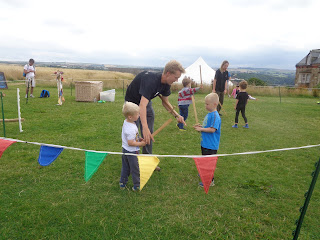 The iconic Whale Bone Arch stands tall on Whitbys west side.  I remember having photo's taken under this when i was little, but the bones that stand now are not the original.  due to weathering the original bones ,donated in 1963 by a Norwegian shipping company, were replaced in 2002 with some from Alaska. 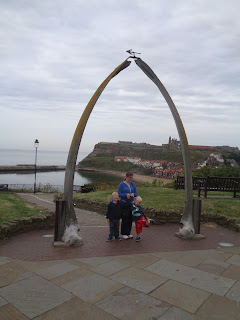 When we came to Whitby as a family we didn't want anything too heavy, in fact with camping and having had a vast amount of takeaway I was really wanting some basic food.  On the way to the Abbey we came across this quaint little cafe.  A simple menu, sandwich for hubby, sausage rolls for the boys and a jacket potato for me at family friendly prices it's well worth a visit.

They even had a pile of puzzles to keep the boys occupied.

However when you do want chips you can get amazing ones from Quayside.  Situated on the harbour and with awards for their takeaway it's certainly one I'd return to. 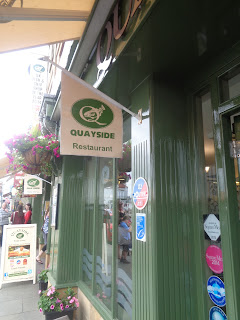 My plaice was perfectly cooked to melt in the mouth with a crisp, but not greasy, batter.  The chips were cooked well with a great soft centre. 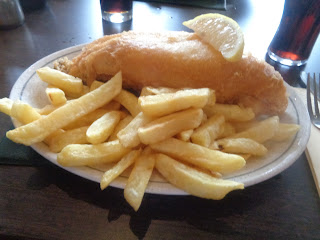 Reports from the boys, who both returned empty plates, were that they were "the best sausage and chips ever" (Ben) and "mmmmmm yummmy" (Noah).  The meals were gone so quickly mummy didn't even get to try! 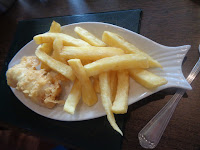 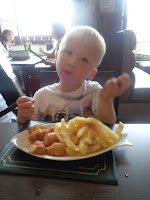 .
J's Ice-Cream Parlour
When you've walked up to the Abbey (and back) this ice cream parlour has become our favourite place to stop at, with the added bonus it is next door to the toilets. 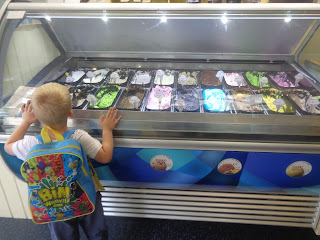 There is a huge range to choose from, posh vanilla, banoffee, chocolate, mint choc, caramel, toffee and then you have the novelty ones for kids, bubblegum, candyfloss or ones made from orange and red or pink and blue millions.

In 2 trips we sampled a lot of flavours between us.  The espresso one, bounty (coconut) and chocolate orange have to be some of my favourites.  The banoffee whilst having the yummiest taste was a bit too overpowering when eaten with other flavours. 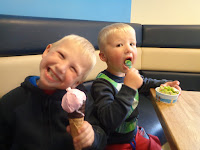 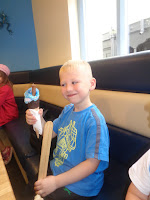 Me and Noah loved the sundaes.  3 scoops of ice cream, sauce and 4 toppings there are endless possibilities to choose from. 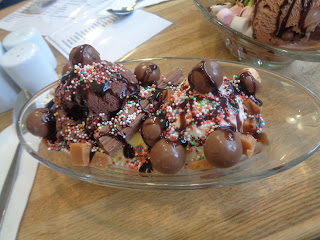 Where's your favourite place to go, experience or eatery in Whitby?