When I heard that Cbeebies were coming to Sheffield to film their Christmas panto I immediately applied for tickets ...... along with hundreds of other people.  We didn't win any :(  this did not phase us tho.

Saturday morning I served the boys a hearty continental breakfast (ok ok the bread needing eating up) which they loved to begin 'treat day',

At 10.45 we set off at to catch the tram to town in thick jumpers and woolly socks.  By 10.50 we were back to get kitted out in woolly hats, scarves and gloves, where has this cold spell suddenly come from?  Off we set again.

The events that follow take place over both the Saturday and Sunday but for continuity have been posted as one.


Tudor Square had well and truly been transformed into a winter wonderland, including Reindeer and very cheeky elves.

There was a Rastamouse tent which we nipped in briefly.  The children were learning how to sing the
"Cookin and Jammin" song.  They were then given a Ukulele each and taught how to hold it and strum in the correct way at the correct times.  Noah LOVED this, he didn't want to strum in time (I don't blame him if I was 2 years old with a new 'toy' I'd want to 'play' too).   If we had had more time I would have taken them to another session but sadly we didn't manage to make the tent on Saturday and were pushed for time on Sunday.  I think I'll be looking out for a local music group tho as the boys did get a lot out of their brief time here.

There was a toys past and present tent where your could make a reindeer puppet. plant a seed. and play with some old style toys.   You could also go shopping in Mr Blooms vegetable shop.


Noah was fascinated by the jack (monkey) in a box and Ben really enjoyed making it open for him.

Ever wondered how Rudolph's nose glows??  You can find out in this tent.

On Saturday we took to the 'cheap seats', aka the bandstand, ready for the 1pm panto showing on the big screen.

We were initially entertained by "That Poetry Bloke" who was really funny reading out some poems and encouraging audience participation.
If you missed him check out his website and twitter feed (@ThatPoetryBloke), he's worth trying to catch in the future.

What happened next.......... well you'll have to wait until December to find that out. What I can tell you is that the panto this year is

It features a lot of the faces you will be familiar with from the shows on at the moment, Justin Fletcher, Ben Faulks (Mr Bloom), Andy Day and Cat Sandion as well as some surprise appearances from some faces of mummy and daddy's Saturday morning TV.  How many of them do you recognise? 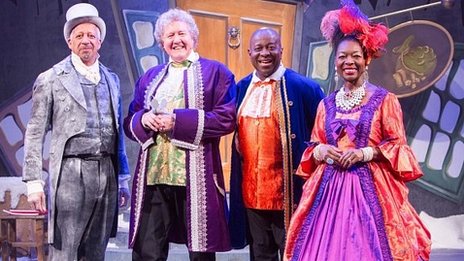 Baroness Floella Benjamin, Derek Griffiths, Iain Lauchlan (and Fingermouse) and Dave Benson-Phillips all have a part to play in the show and if you look closely you may even spot Humpty making an appearance.

It features everything you would expect from a panto - singing, dancing, men dressed as women and laughs as well as the re-telling of a great traditional story.

A CBeebies spokesman said: “Charles Dickens’ classic novel has been adapted for the CBeebies audience with the mean Ebenezer Scrooge needing a bit of CBeebies magic to learn to care for those around him and share in the joy of Christmas.

The CBeebies Christmas Carol will be aired on Cbeebies on December 20th 2013.

ohhh and to the person in the white crochet hat (if you happen to stumble across this) who FILMED the entire 1pm showing of the panto on Saturday from outside on her white mobile phone.  I really hope you are ashamed of yourself, what a bad example you sat to the kids around you.  Not to mention a breach of copyright and annoyance to the people sat behind you.

We then watched an appearance by the Acro Elves who were nothing short of fantastic.  As they wowed the audience with the rolls, jumps and slapstick comedy.

If you'd like to see a bit more of what's in store than check out their website or the below video clip.

Michael de Souza then retold a classic Rastamouse story with the help of a few (far too ecstatic if you ask me) members of the audience.  When the tale is finished he makes way for the Easy Crew who entertain with some songs.

Following the Easy Crews display Dr Ranj from "Get Well Soon" took to the stage to sing some songs with the kids (it would have to be the kids mummy couldn't stop laughing at the words long enough).  He brings some popular favourites with him such as Tummy Trouble and Oh Poo!   If like me you don't know the 'interesting' words to these songs then don't worry...... they can be found on the Cbeebies website.

The finale display for us (as 3 hours in we were pretty cold and may have needed Dr Ranj to defrost our feet if we had been sat any longer)  was Mr Bloom.  Sadly his veggies were busy were their swimming lessons,
and I'm not sure they would have liked the hail after the warmth of their greenhouse.  We were introduced to some new baby veggies (including his marrow and onions).
We all joined in with singing and gave our tiddlers a cuddle.

Thanks to a little bird I discovered Mr Bloom was filming on Sunday so, with no tickets, we headed into town again to try and get some standbys... we were not only in luck but got a pretty good view too.

The boys have not been in a theatre before (they've been to the cinema tho) and I wasn't sure quite how they'd react (you need fantastic free events like this to test the water).  Both sat mesmerised by the lights, the stage and the show.  They joined in at the right parts and have asked me to take them again.

The Cbeebies ground crew got 5 gold stars from us.  They had a buggy park set up with a ticket system (free) to ensure that you didn't a) have to manoeuvre it around and b) you had to prove it was yours (with the ticket) to get it back.  We made proper use of this on Sunday to park the buggy up while we explored the exhibits and went to the Mr Bloom show, smallest boy was very grateful too for the chance to escape and stretch his legs. When the rain started on Saturday myself (and others) headed over to the buggy park to put raincovers
down, we needn't have worried - they had been done for us.  When the heavens really opened, the staff brought out large tarpaulins and covered them up.

The staff at Mr Blooms show did a very good attempt and Tiddler Crowd control with a very busy audience.


The boys have not stopped talking about this event and have spent most of the afternoon treating me to a megamix of "This is my allotment/ I like to rhyme it rhyme it".  Ben has asked me for a Mr Bloom dressing up outfit as he is now his future inspiration (at least he doesn't want to be Batman any more).

They have also asked to go and see the Cbeebies Big Band Live tour next year...........perhaps I can get tickets for Noah's birthday present........