Nothing says Happy Christmas better then pooping dinosaurs does it?  So this year I won't be saying "Happy Christmas" to you, I will be sharing with you the fabulous creations of Tom Fletcher and Dougie Poynter (yup them guys from McFly) and "Poop, presents and prehistoric creatures".

We were really lucky to be asked to review that funny series and when the postie (eventually) decided to deliver it just before Christmas it was in great time for a 3h train ride to London.

I am sure the rest of the train enjoyed the hysterical laughter from our seats.  From mummy, who found it difficult to actually stop giggling long enough to read some of it, the boys who, well lets face it, it mentions the word poop - need I say more, and even Grandma managed a smile!

There are 3 books in the series - lets have a look. The Dinosaur that Pooped Christmas is the first in the set.  This book introduces you to Danny, the little boy who has everything.  Fortunately Santa has a dinosaur egg looking for a new home and leaves it under the tree on Christmas Eve.

This is not a lovely herbivore, oh no, this dinosaur doesn't care what it eats from "reindeer, the sleigh bells and all things that jingle" right up to Danny's mum and dad (and poor old granny).  Of course tho, with his tummy full poor Dinosaur begins to feel a little bit poorly and does what very creature does to get rid of it .......... 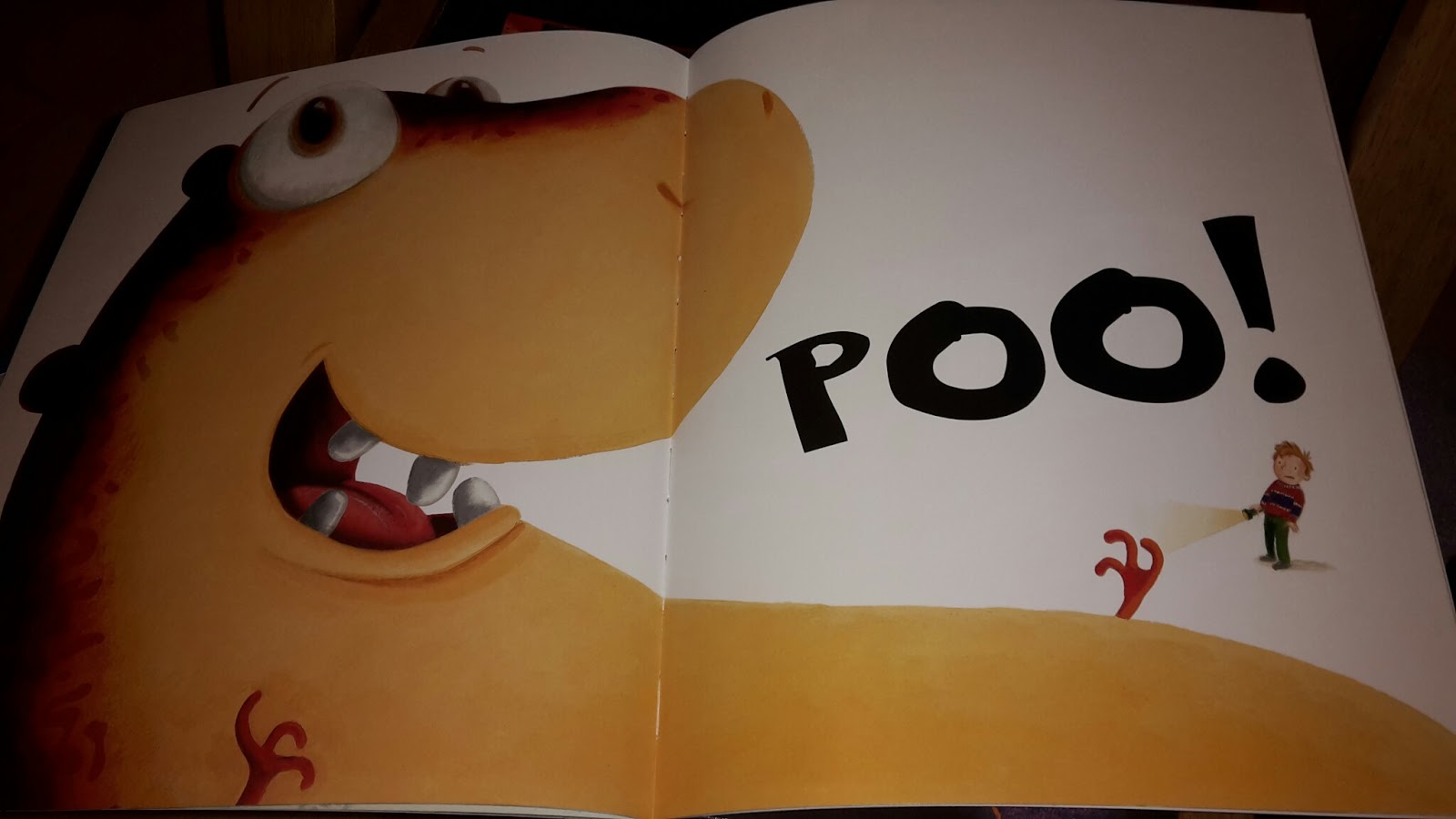 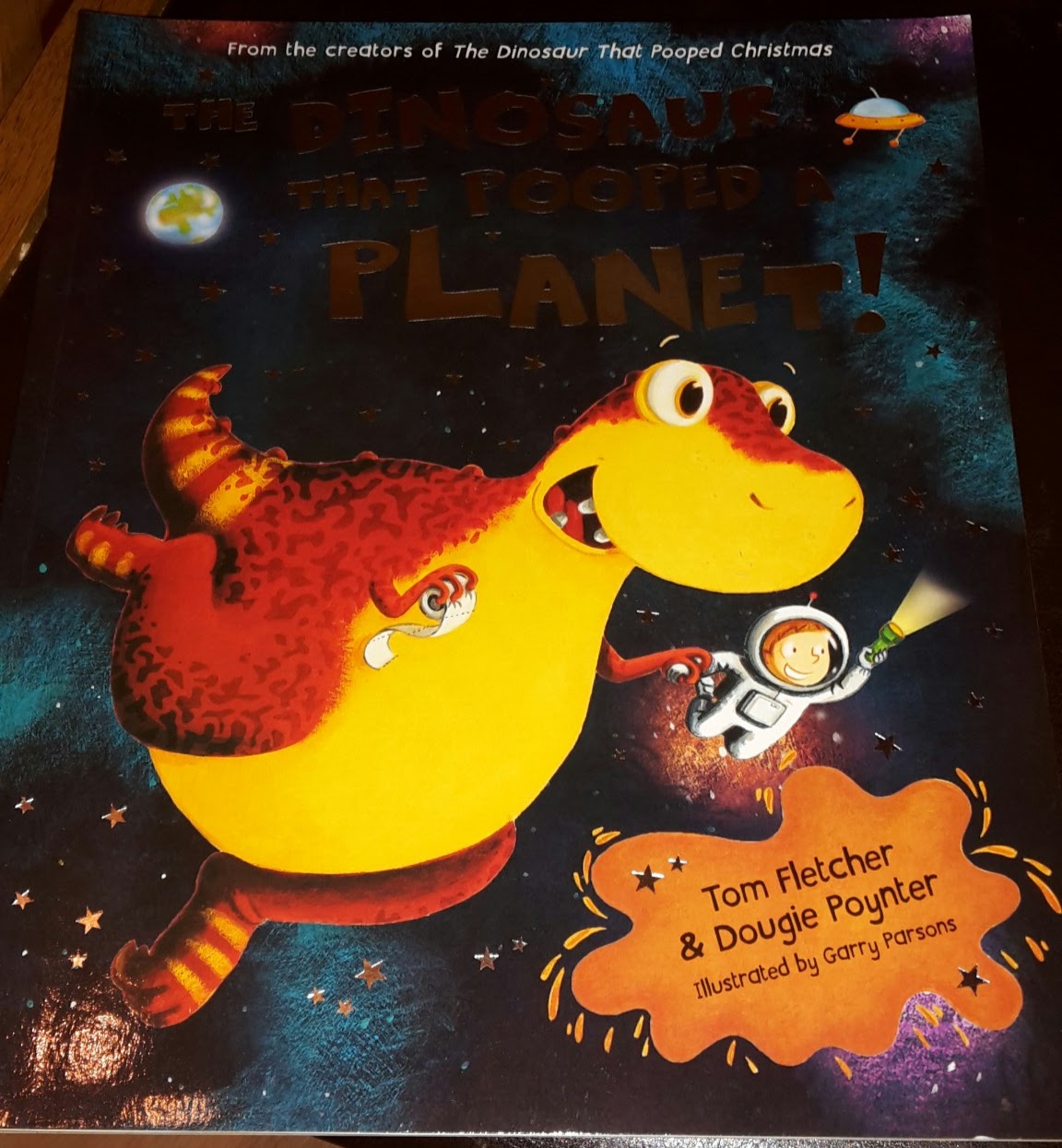 Next up come The Dinosaur that Pooped A Planet.  Danny and Dino fancy a trip to the Science Museum but, after much misbehaving, and  not having eaten breakfast Dinosaur gets a little peckish.  He eats his way through "robots and ray-guns and blinking red blinkers" not to mention the "Martins from Mars and their cats".   With his tummy fit to burst, guess what happens to release all the space 'food'...... well he creates a "poop planet right next to the moon". 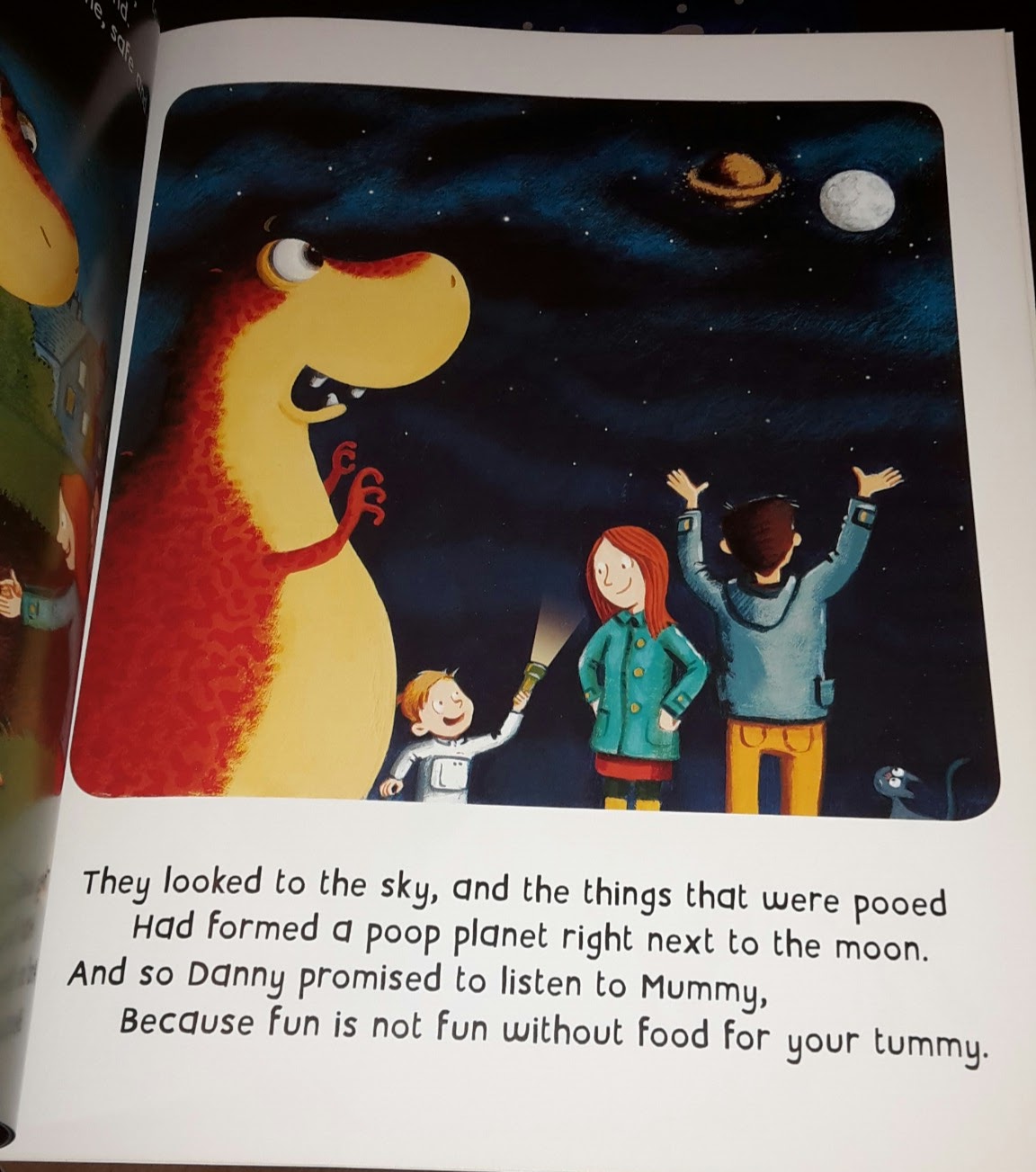 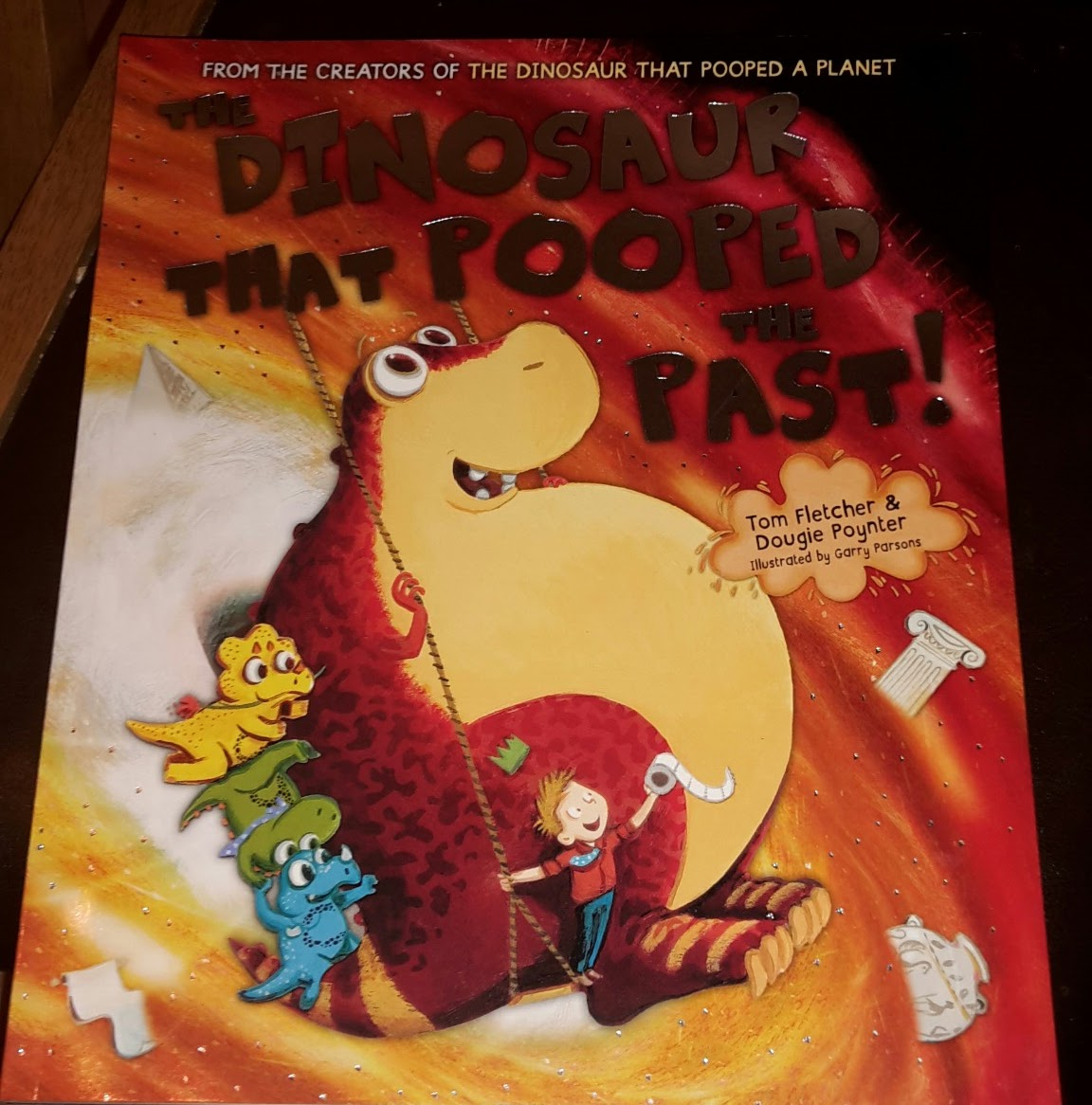 The third book we laughed our way through was The Dinosaur that Pooped the Past.  It's grans birthday in this one and Danny and Dino are forced to eat her horrible cooking before they can go out to play.  But when they do escape they fly backwards through time to meet Dino Dudes A, B and C who love to play games.  In a slight twist Dinosaur doesn't eat any more, however danger strikes when a volcano erupts and they can't get back home.  Thankfully full of sprouts and brocolli eggs Dinosaur propels them back to the future with a great big poop launching "them to eighty-eight miles per hour"........ just in time for some brocolli cake. 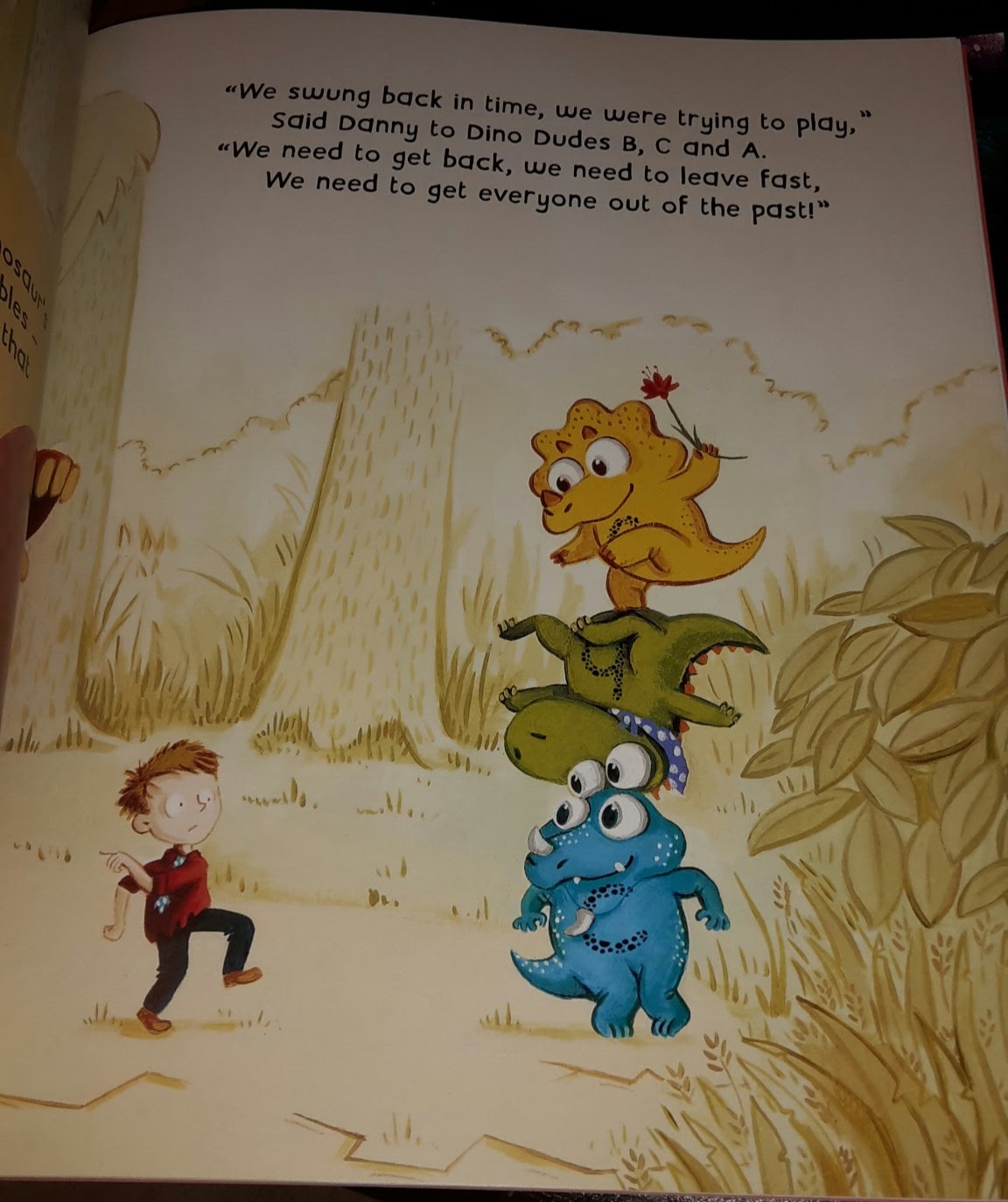 You can see for yourself above how bright and colourful the illustrations are and I love the way it's written in rhyme.  There was a shorter story about Danny and Dinosaur released for World Book Day this year which I'll be keeping my eyes out for and I really can't wait for the lads to release another one.

The Dinosaur That Pooped series is published by Random  House and have an RRP of £6.99 each

Disclaimer:  I received these books free of charge to review, the links above are affiliate Amazon links.
Posted by Scouting Mummy at 17:28