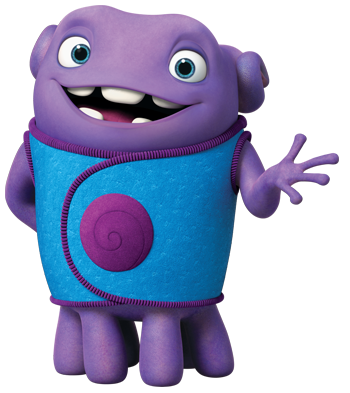 I neeed a pet Boov .... well I need one in particular ... let me introduce you to 'Oh' a simply ohh too cute little Boov

Sorry, I may be jumping ahead of myself - a Boov is a species of alien race who can not only control gravity but also change colour depending on their mood (wouldn't life be so much easier if your child turned green when they were lying or yellow when they were scared).  They feature in the new Dreamwork's animation 'Home' which is released this month.


In Home the Boov's, led by Captain Smek, have come to take over Earth in a search for a new place to live and hide from their enemies.  In order to move in they have to relocate humans to another place, Gratuity 'Tip' Tucci becomes separated from her mother and is fending for herself with her pet cat, 'Pig'.  Oh is soon banished by his race after accidentally letting the enemies know of their new location, gradually an unlikely bond develops between himself and Tip as he learns about love, friendship and dancing.

It may be Dreamworks 31st feature film but the quality remains and in my opinion this is one of the best films they've made, especially when watched in 3D.

It's really hard to get over the fact the Oh is voiced by Jim Parsons (Sheldon Cooper in the Big Bang Theory) especially when the script could have been written with this character in mind.  You have to watch it to see just what I mean, some of the words and phases would not be out of place in a Big Bang Theory episode.

In the original books Oh is actually called J. Lo ...... coincidence then that she (Jennifer Lopaz) is the voice of Tip's mum, Lucy.

Two other big names also star in the cast with Rihanna voicing Tip and Steve Martin as Captain Smek.

We loved it.  My husband isn't a huge fan of animated films but even he was laughing at the jokes ans came out saying he'd watch it again, a feeling echoed by myself and Ben (6). Even Noah (3) who gets a bit bored at sitting still once a film has been on an hour and the popcorn has run out, sat transfixed until the end.

We're really looking forward to this coming out on DVD to add to our collection. 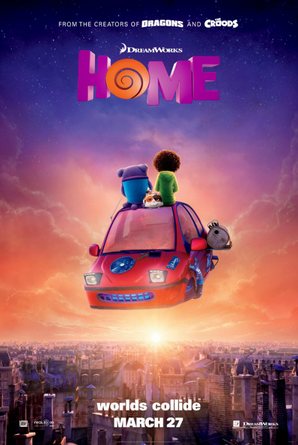 Disclaimer;  We originally went to the cinema to watch an entirely different film but due to a mix up with the attendant telling us the wrong screen ended up in a Home preview session.  We didn't complain as it was far better then the film we'd originally planned to see :)