Exploring Nottingham - Gotham and the castle. 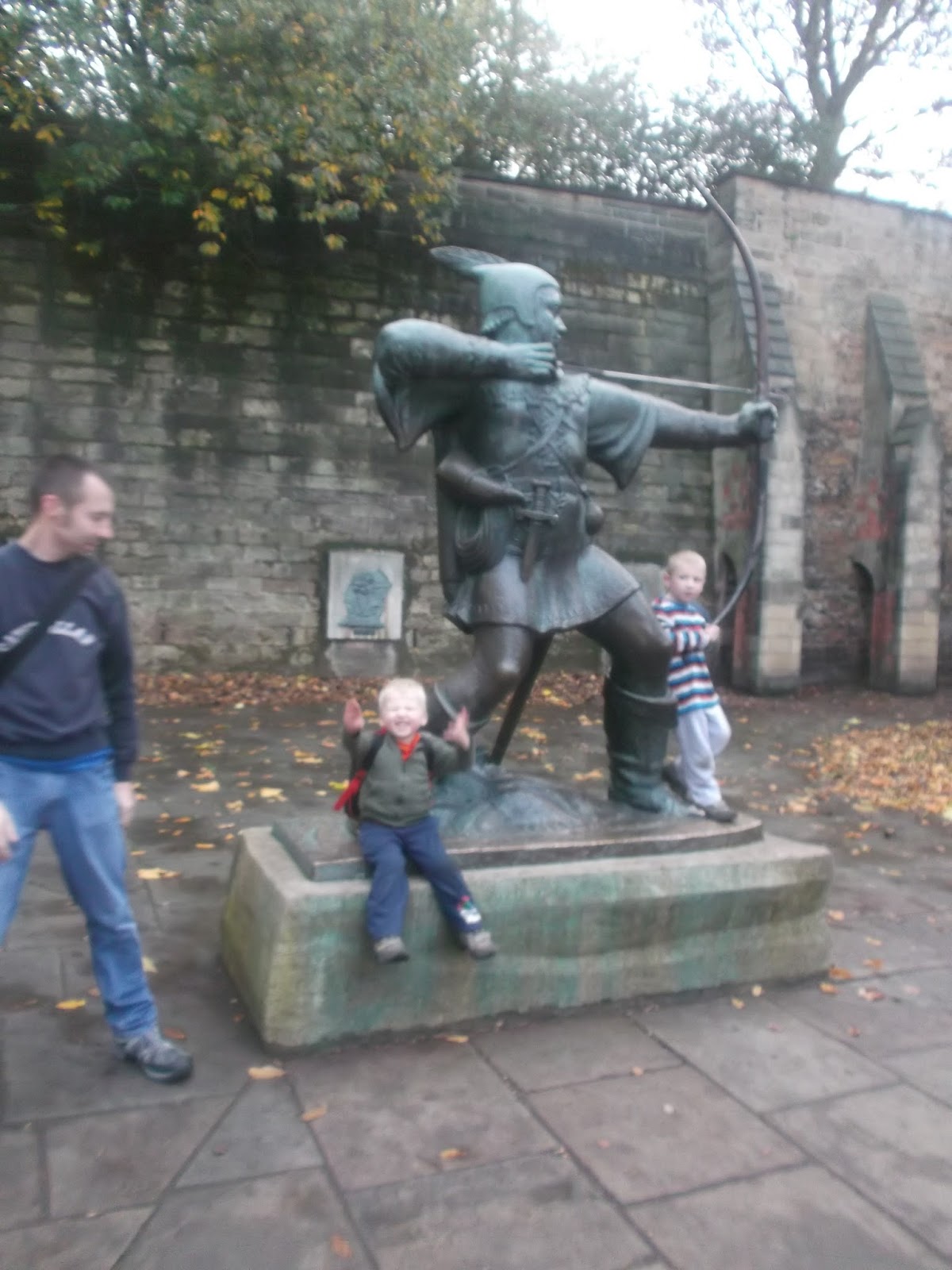 From the moment we went to Nottingham for the Midlands Bloggers Meet Up the boys have been desperate to return and go to Gotham in search of Batman (did you know it's actually pronounced Goat-am?)

Not wanting to disappoint, and finding out that Nottingham Castle had a freebie open day (another place on their wish list)  we decided to make a day of it.

If you don't drive Gotham is a bit of a pain to get to, it is a straightforward bus route but takes about
half an hour and costs a lot - we're talking £9 for a family ticket in half term, I believe this would be £9 EACH in school time.  Although this ticket can be used on busses in Nottingham it can't be used on the tram network which meant we had to leave that treat for another day. 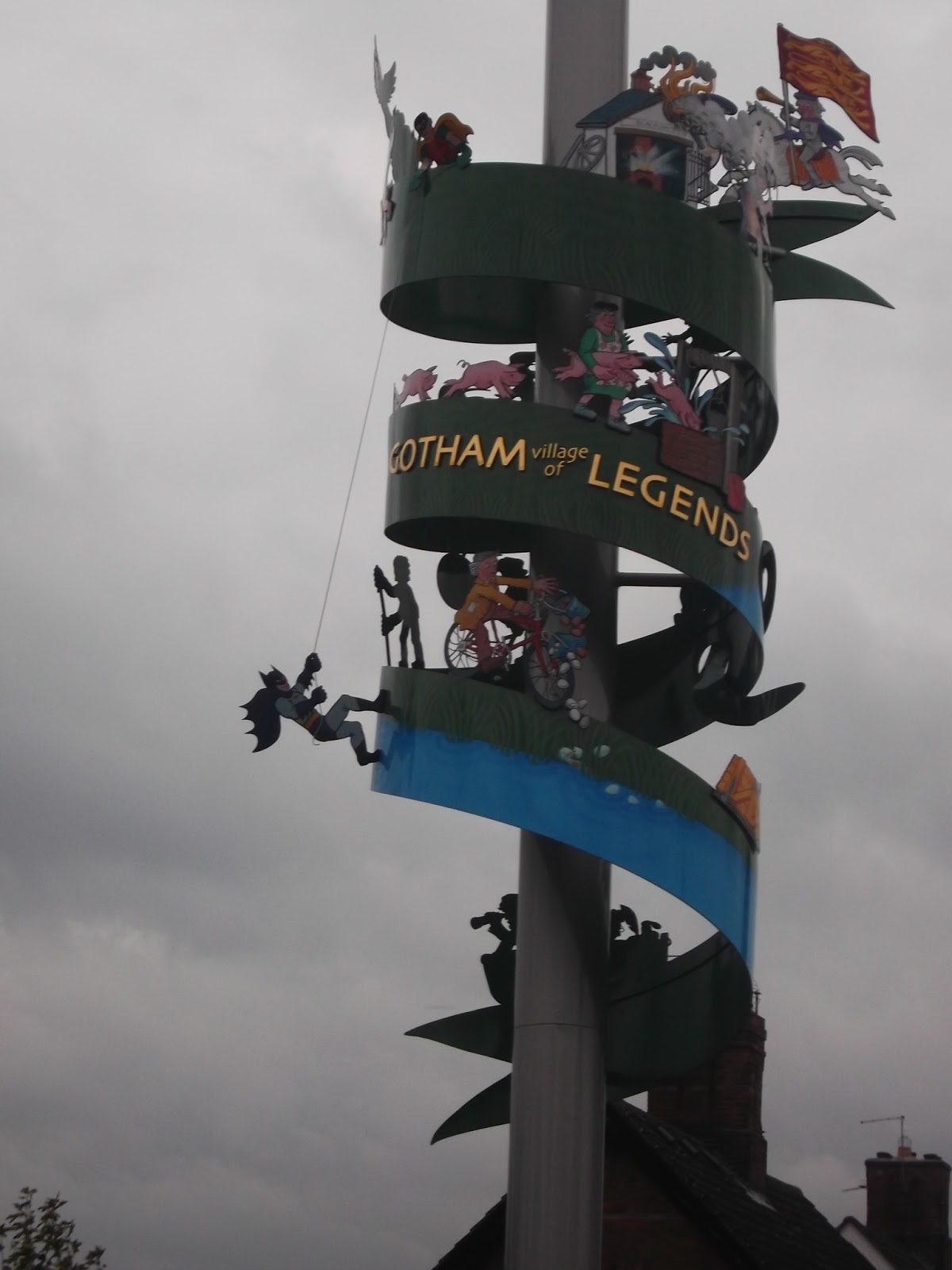 It is believed that Gotham IS the village that gives it's name to the Batman location as in 'Cityscape' (Batman Chronicles #6) it is revealed that Gotham was initially built for the purpose of housing the criminally insane.  In this issue a villain declares "I even have a name for it. We could call it 'Gotham' after a village in England - where, according to common belief, all are bereft of their wits".  This ties
in with the traditional tale of the area and the stories of the "Wise Men of Gotham".  These depict the people of the village as being stupid, however, the reason for the behaviour is believed to be that the villagers wished to feign madness in order to avoid a Royal Highway being built through the village, as they would then be expected to build and maintain this route. Madness was believed at the time to be highly contagious, and when King John's knights saw the villagers behaving as if insane, the knights swiftly withdrew and the King's road was re-routed to avoid the village.

There's not a lot there to be honest; a shop, a church, a garage and a enough pubs for a pub crawl.  The one that caught our eye however was called 'The Sun Inn' and had a brilliant sense of humour.  From their 'Naked Barmaids' to their telephone answering servies (sadly I didn't get a picture of this one). 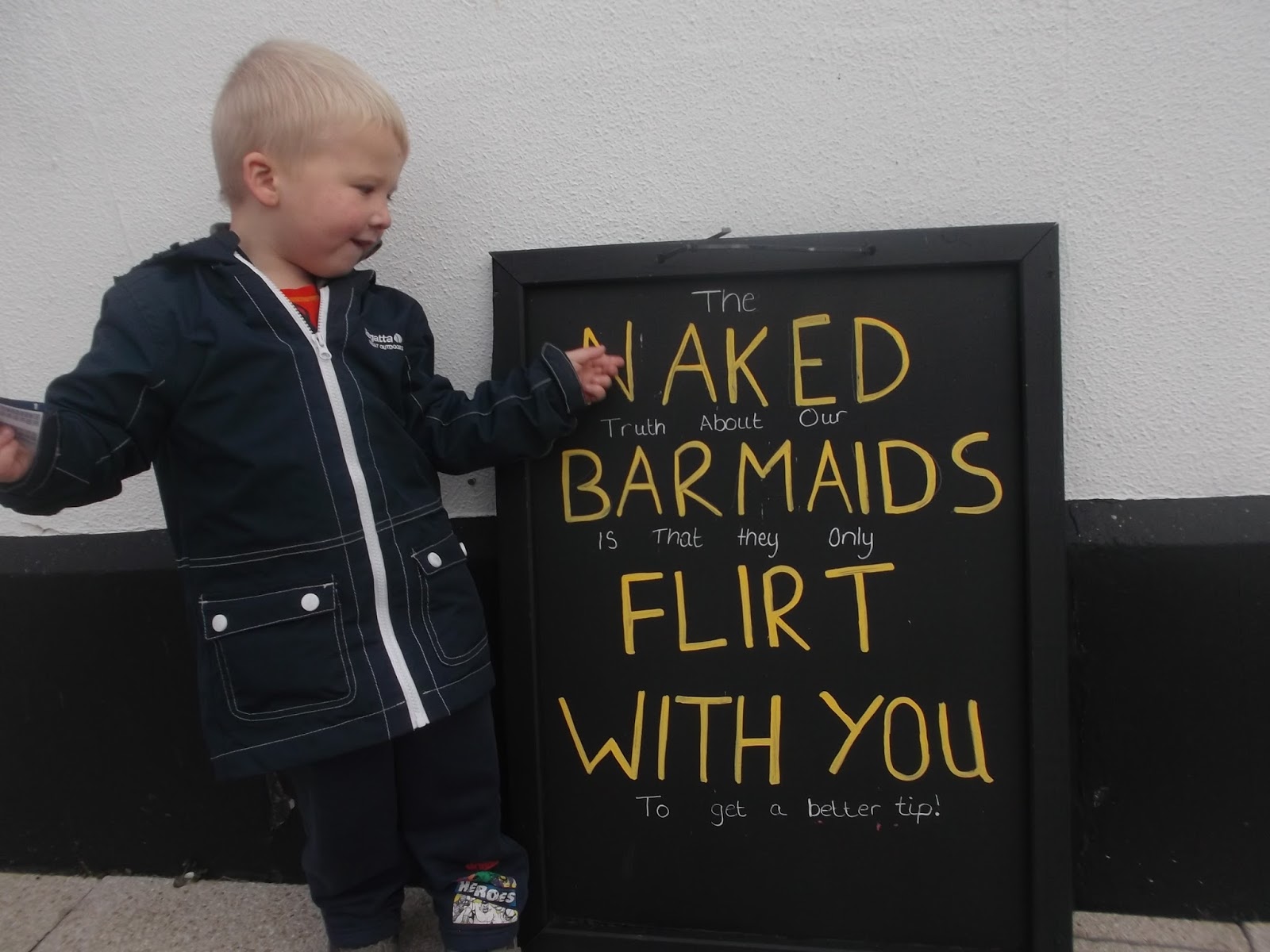 Nottingham Castle
There has been a castle on this site since 1067 when Norman the Conquerer built the first one.  Over time they have been knocked or fallen down and rebuilt until you get todays 17th Century ducal mansion built in 1663 for William Cavendish, First Duke of Newcastle.

The castle now houses a museum and art gallery covering fifteen centuries of Nottingham history brought to life through stories and interactive displays.   The boys loved the magic computers that you could move around to see the mansion how it used to be before it was gutted in an arson attack.

Noah also loved getting the opportunity to pretend to be Robin Hood.

Outside you can tour the caves under the castle, something we would love to go back and do when the boys are big enough to appreciate it (and tackle the 300 steep steps down).

Alternativly you can look out over the 130 feet (40 m) cliffs at the amazing views.

Once they have exhausted the museum and views the kids can wind down in the playground full of wooden fortruses and slides and a sandpit.