Made in Sheffield: Out Of This World 2014

We have just got in from the most fantastic time in town at Out Of This World.  A relatively free event run by Sheffield City Council with input from loads of places.

As far as I gather the events we saw today differed slightly from yesterdays but we had so much fun, 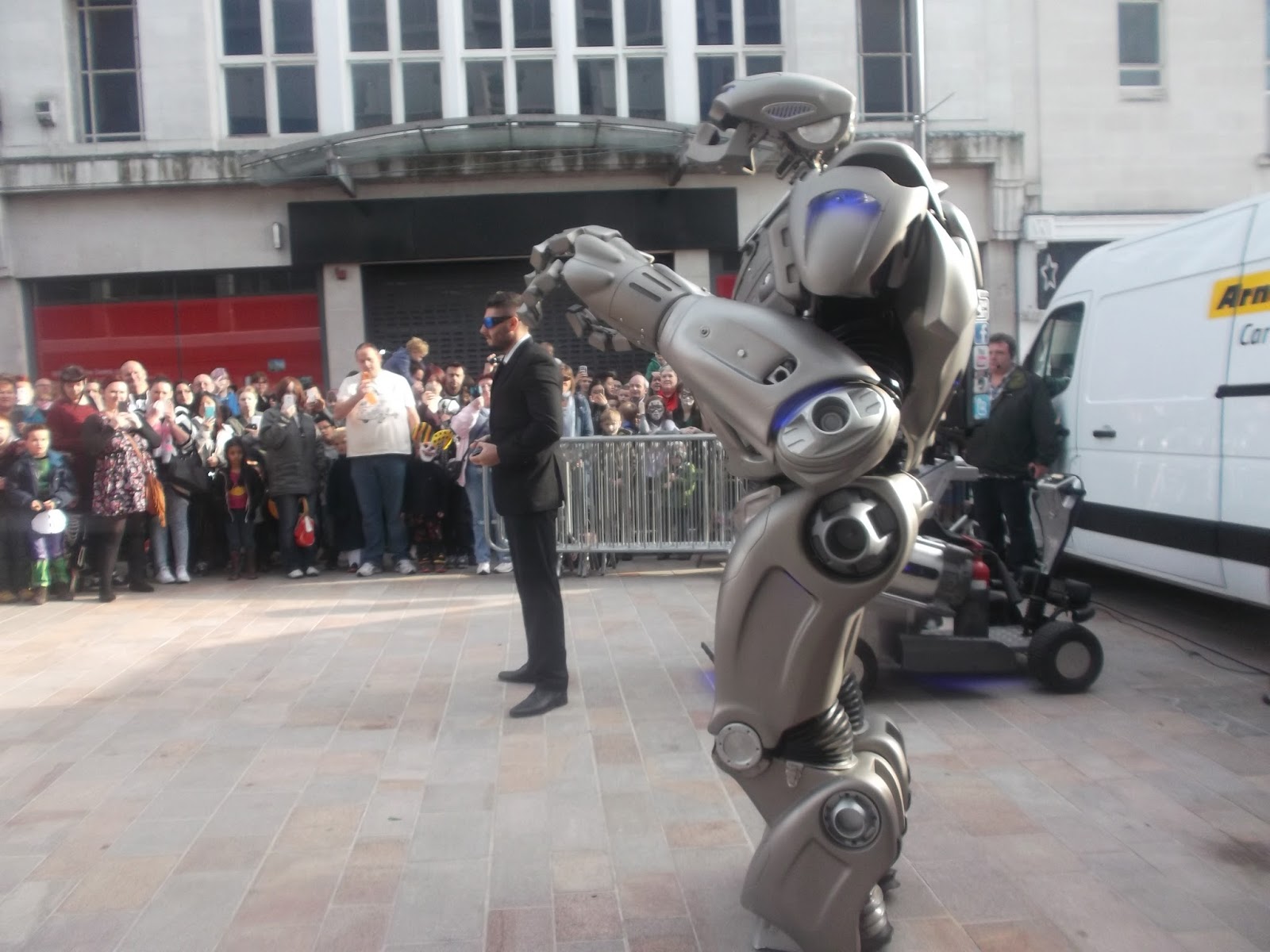 We started the morning down the Moor watch the Hype Dance Company (with some kids as young as 5 or 6) showing off the dances they had been practicing.   I know Ben would love to do something like this but like most things I'm worried I'd pay a lot and have him give up after a few sessions like he did at football.

Following on from Hype came Titan The Robot.  WOW this guy sure could bust some moves - the boys were hypnotised, must admit mummy was pretty impressed.
Ben and Noah loved his rendition of Gagnam Style and his crying.


After lunch (chips from a van... mmm can't beat em) we headed to the Winter Gardens where we bumped into non other then Spiderman and Iron Man.  The boys were a little concerned that Iron Patriot (who appeared later) had left his suit behind but we had good fun trying to work out who he was outside as I told them he had gone for lunch without it so no-one recognised him. 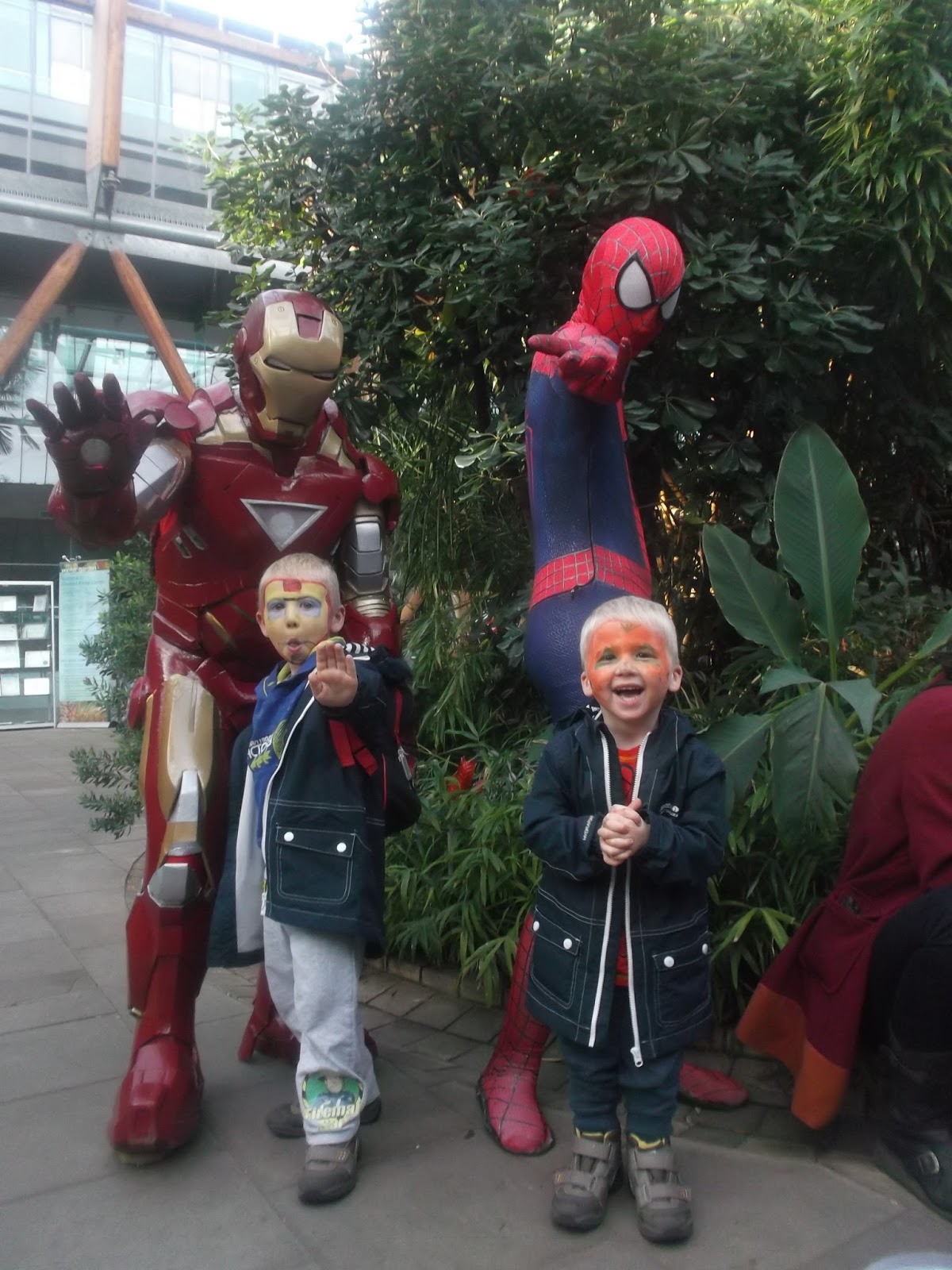 Then Noah spotted Darth Vader and went to play with his light saber (ok he tried to hit him with it!) Ben on the other hand was a bit scared, not sure why. 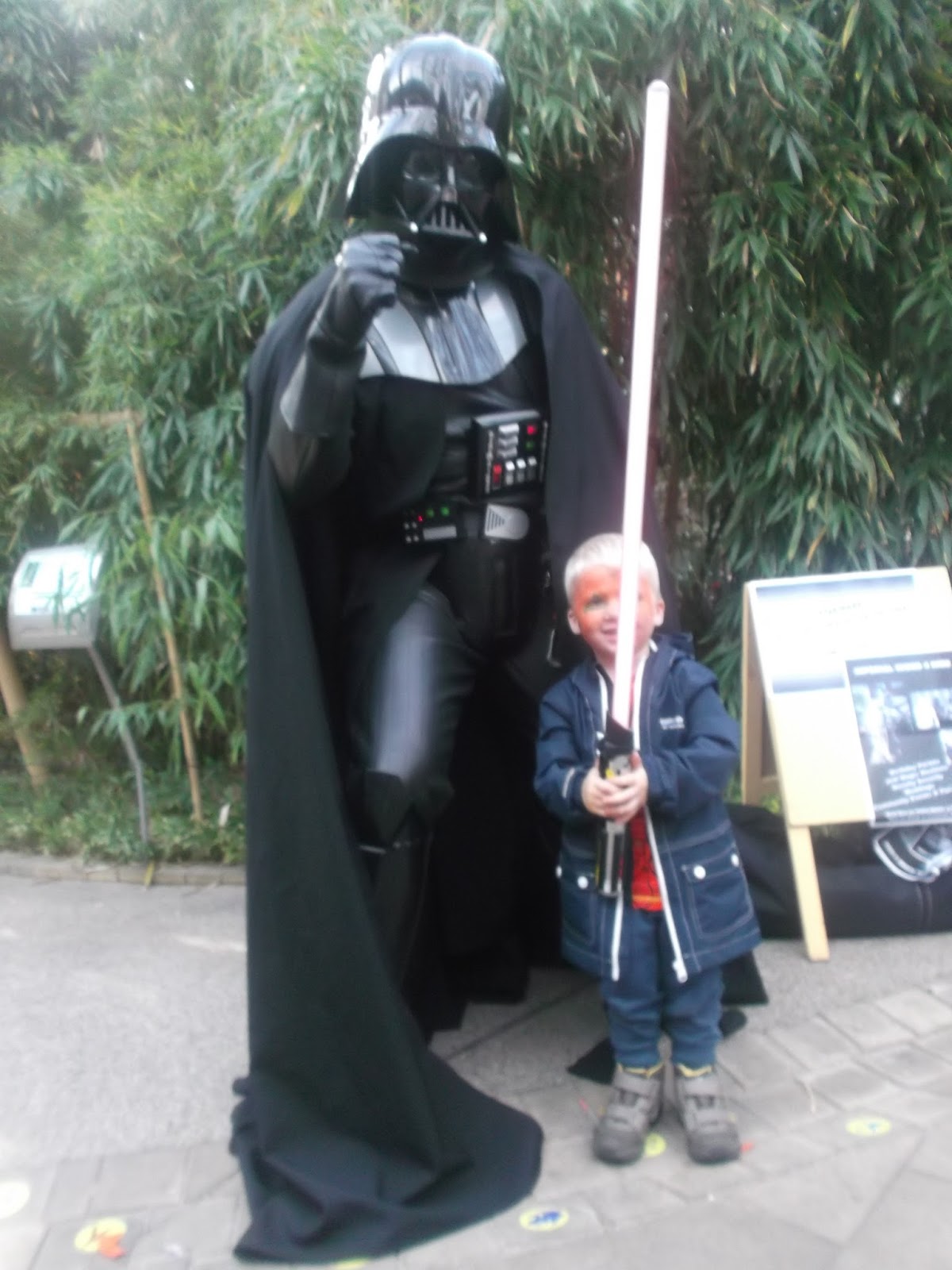 Whilst on a hunt for Captain America (who I persuaded them was also having lunch or out saving someone) we came across Leonardo who was in a bit of a rush to get his Pizza but still hung around for a picture with the kids. 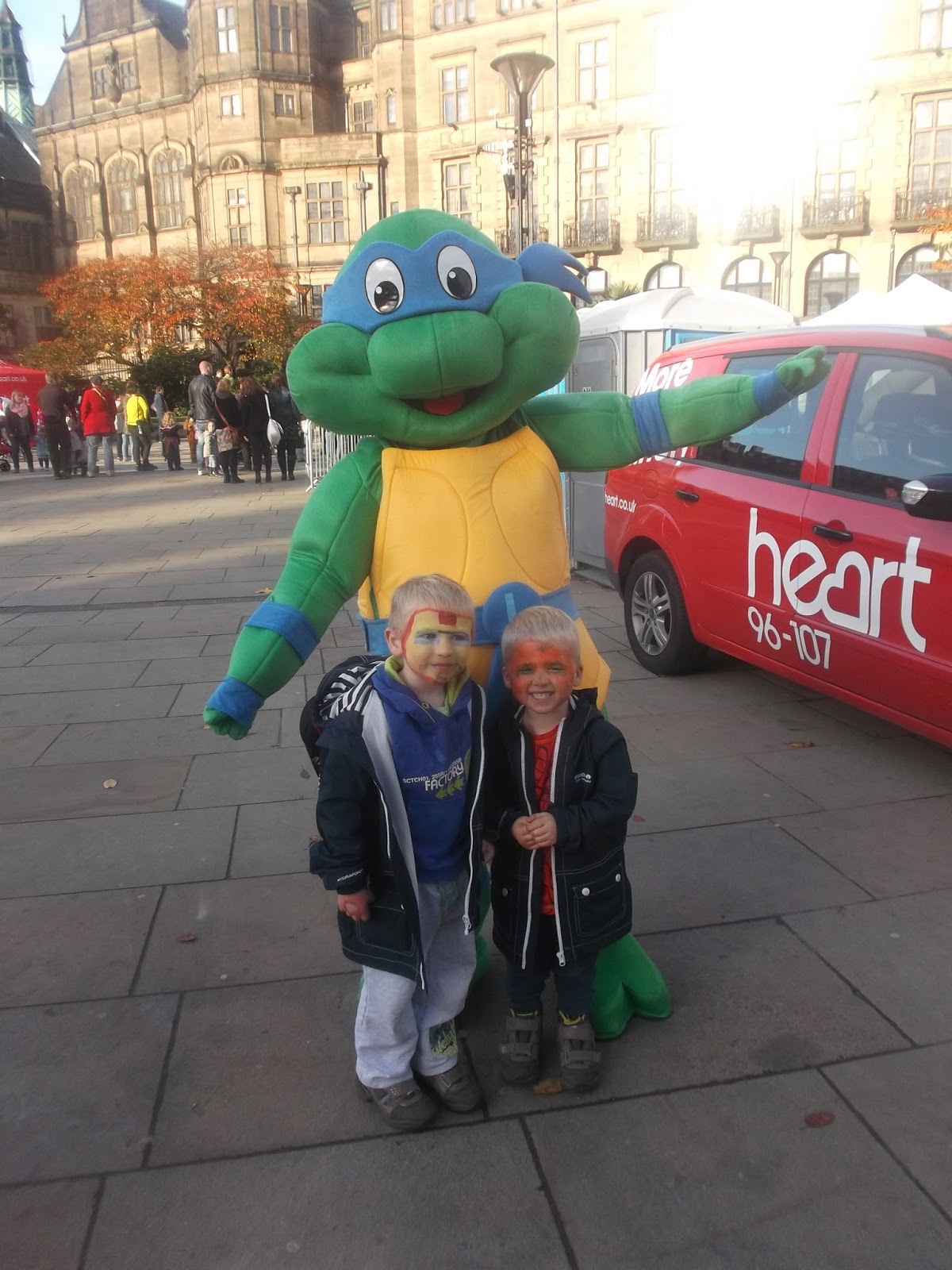 It was then the Heart Angels announced it was TimeWarp time (yay), apple bobbing and giant connect 4.... and yummy Haribo. The boys had their picture taken so keep an eye out for them on the website. 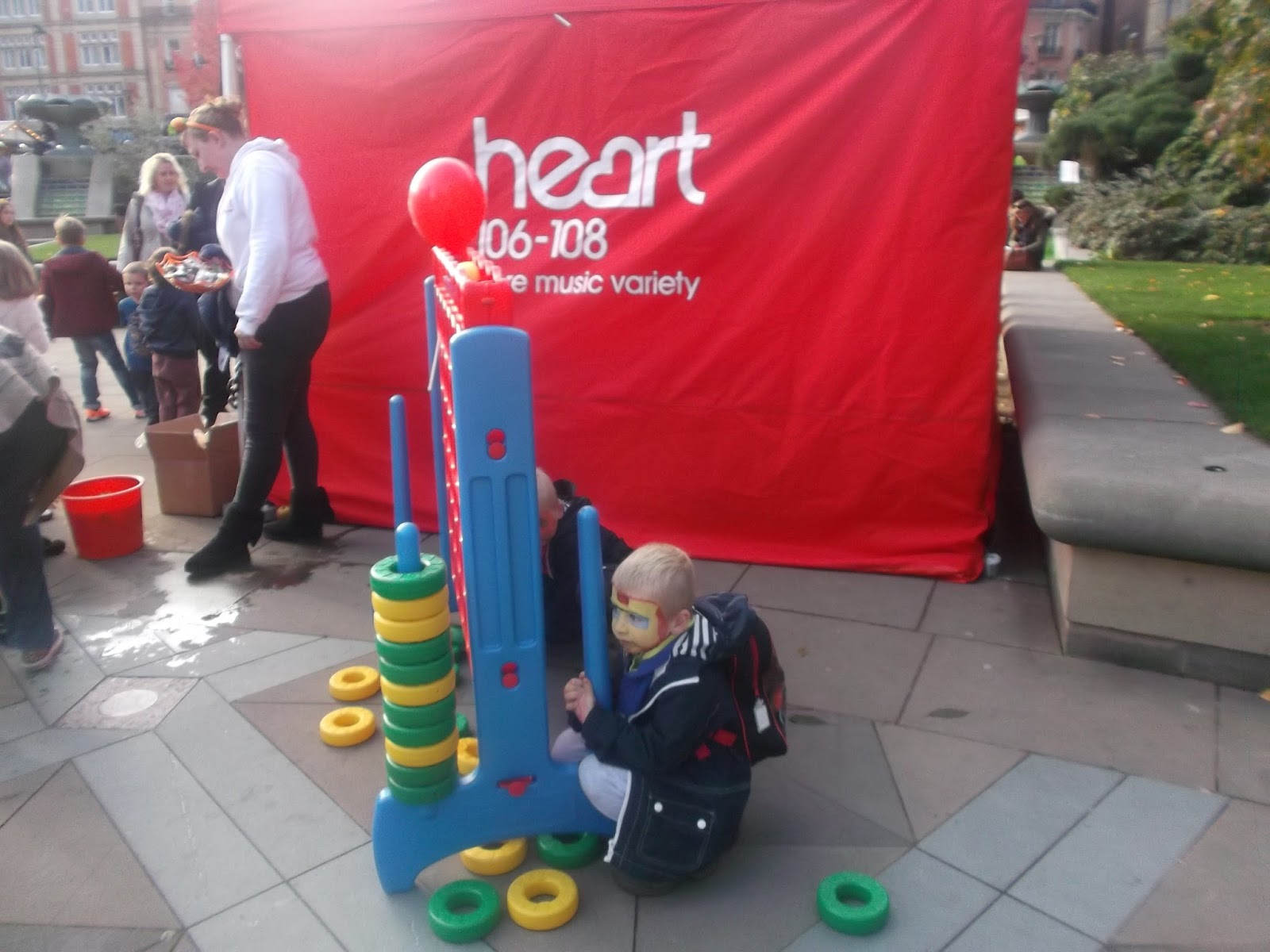 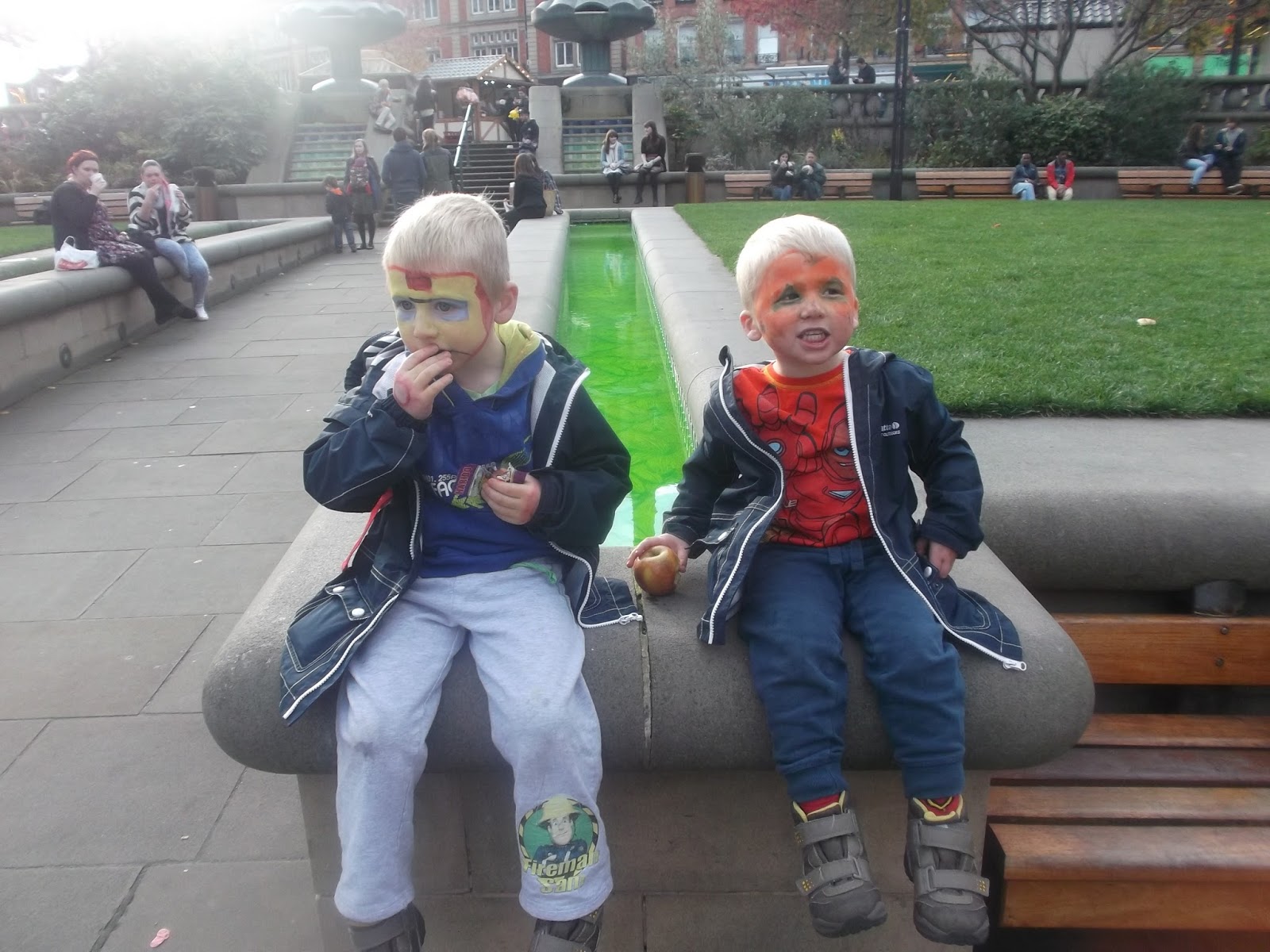 We went to have a look at the cars, Bumblebee (from Transformers I was advised) and the A-Team Van and Noahs favourite... The Mystery Machine (complete with Scooby Doo). 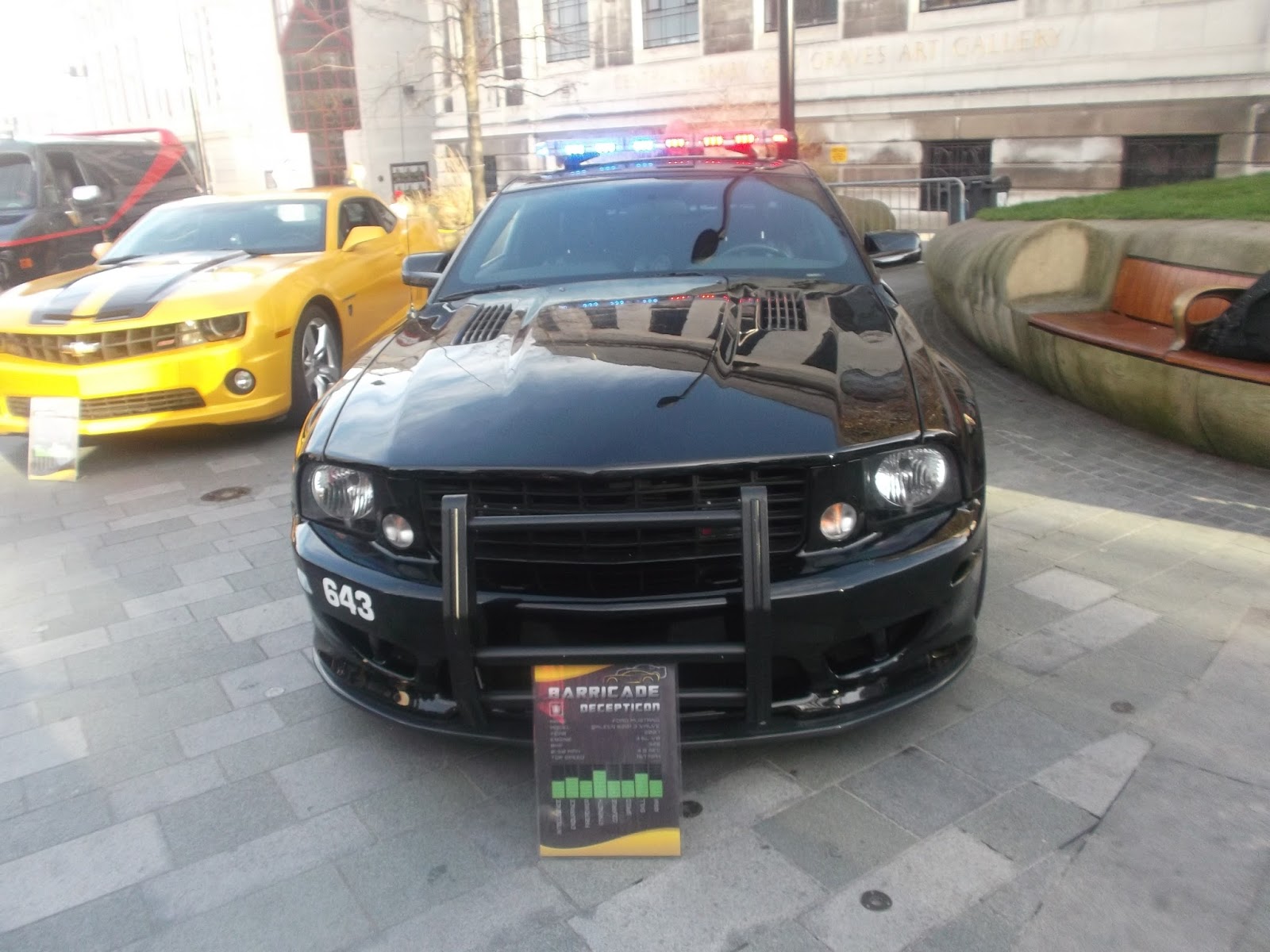 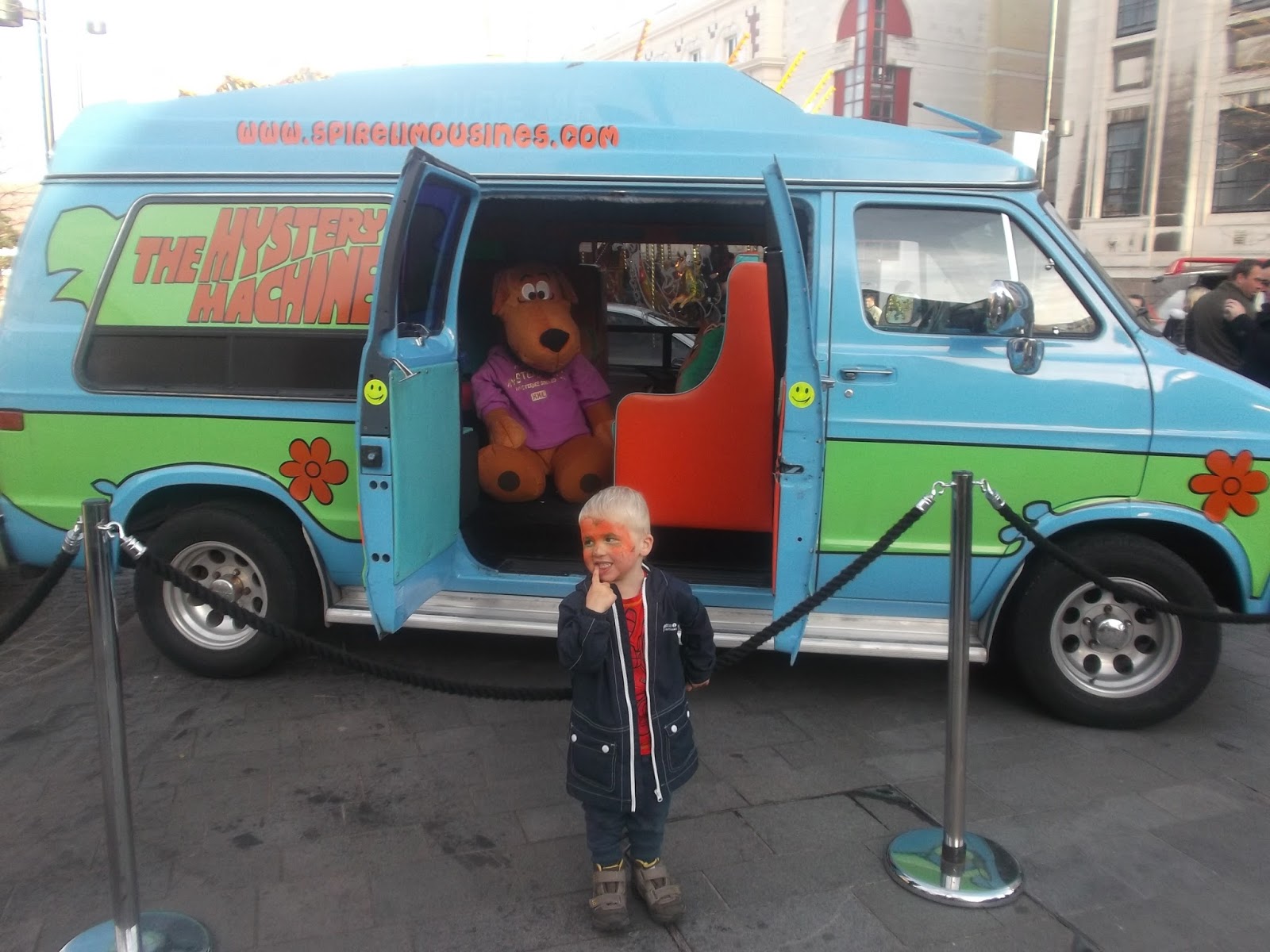 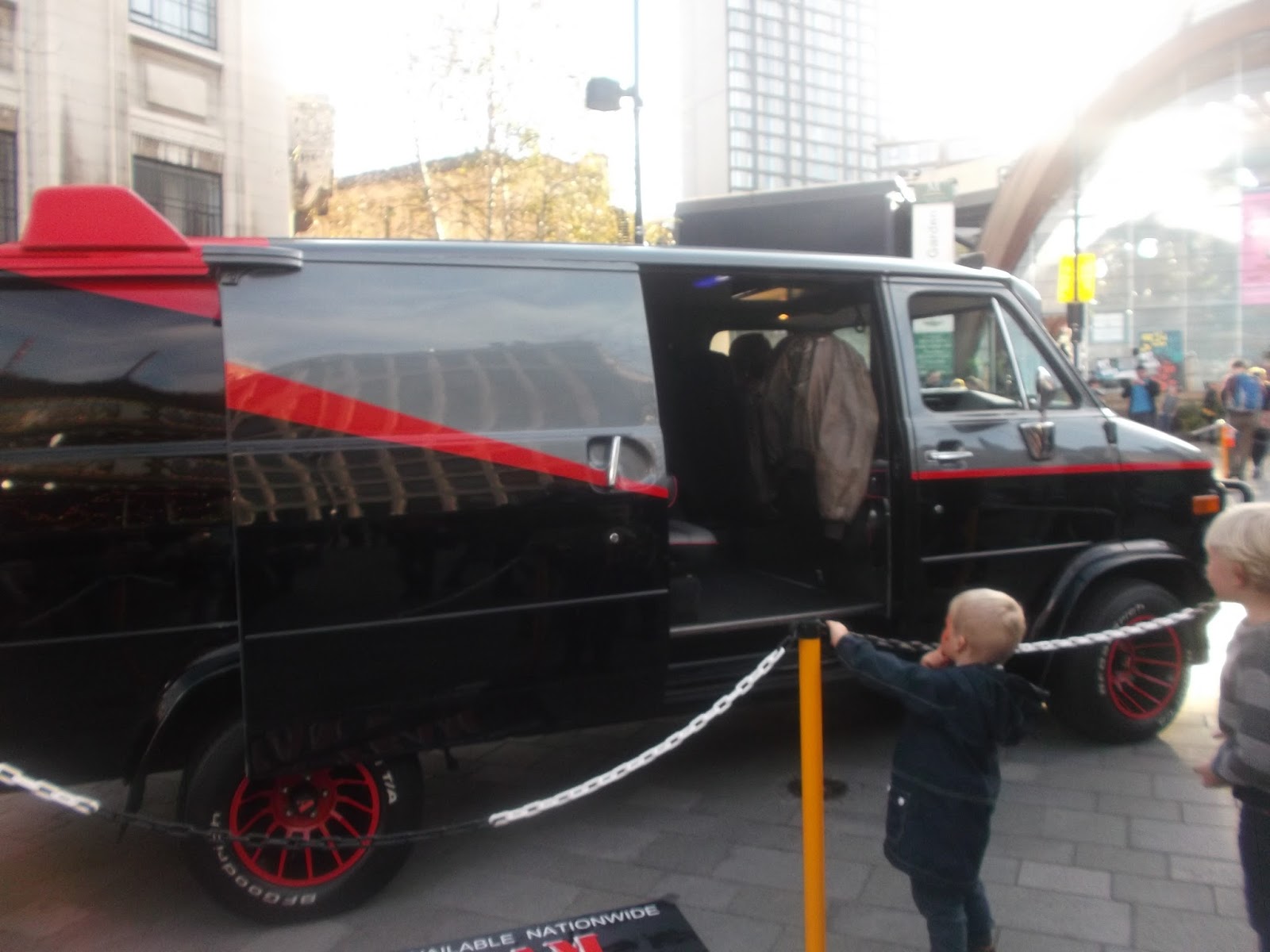 The boys cannot stop talking about their superhero meets and Titan and it only cost me £1,50 for food and £2 in donations :)   I talked them out of the expensive rides at £1.50 each (£2 for the carousel!) and bribed them with chocolate coins from Boots for £1 a bag.


Ohh did I mention the water?  Red and Blue outside the City Hall and green in the Peace Gardens....brilliant. 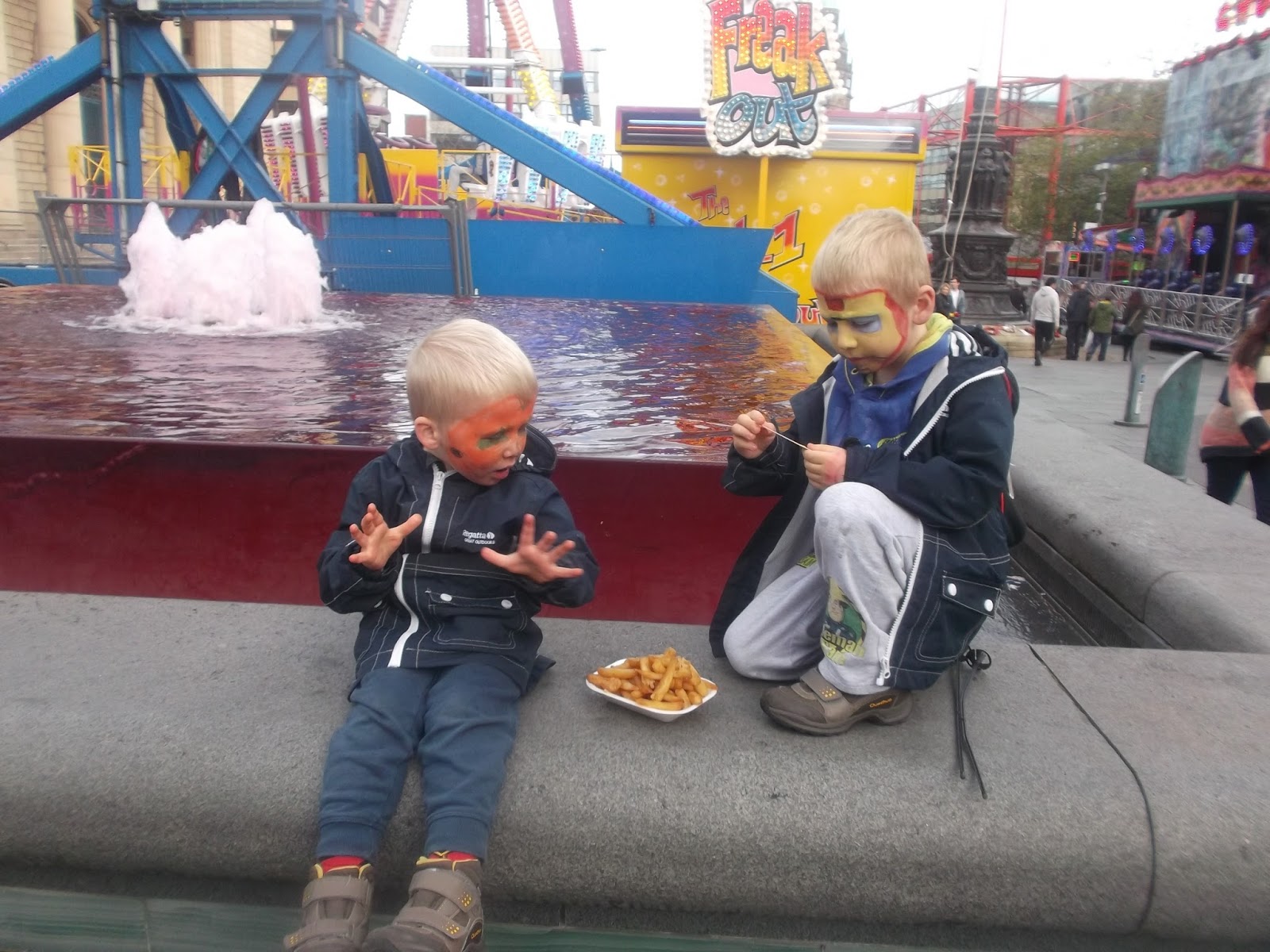 The boys saw Mickey's wizard hat and hoped they'd see him but sadly we managed to miss one another.  But perhaps the most comedy costume we saw was the one dressed appallingly as Peppa Pig in an ill-fitting costume.  Unlike the others this was terrible and the boys knew it wasn't real straight away... but great for comedy value!!

Please run again next year, it beat Fright Night hands down.
Posted by Scouting Mummy at 17:29

Labels: 2014, heart, Out of this world, sheffield, titan the robot