Best Book for ...... Reading as an adult when it is designed for children

The award for this one has to go to Harry Potter by JK Rowling.

If you haven't heard of it (who am I kidding) Harry Potter is an orphan who starts his journey as an ordinary 10 year old boy with magical powers living in a 'Muggle' or non-magical world.  He finds out on his 11th birthday that he is in fact a wizard.  As a wizard he was invited to attend Hogwarts School of Witchcraft and Wizardry where much of the 7 books take place.   As the books progress, each one documenting a year of his life, we see Harry and his friends Ron Weasley and Hermione Granger grow up and develop magically as well as socially and emotionally. They face all the challenges teenagers face such as changing friendships and exams, and some not to ordinary - the greatest challenge of all, Voldermort. 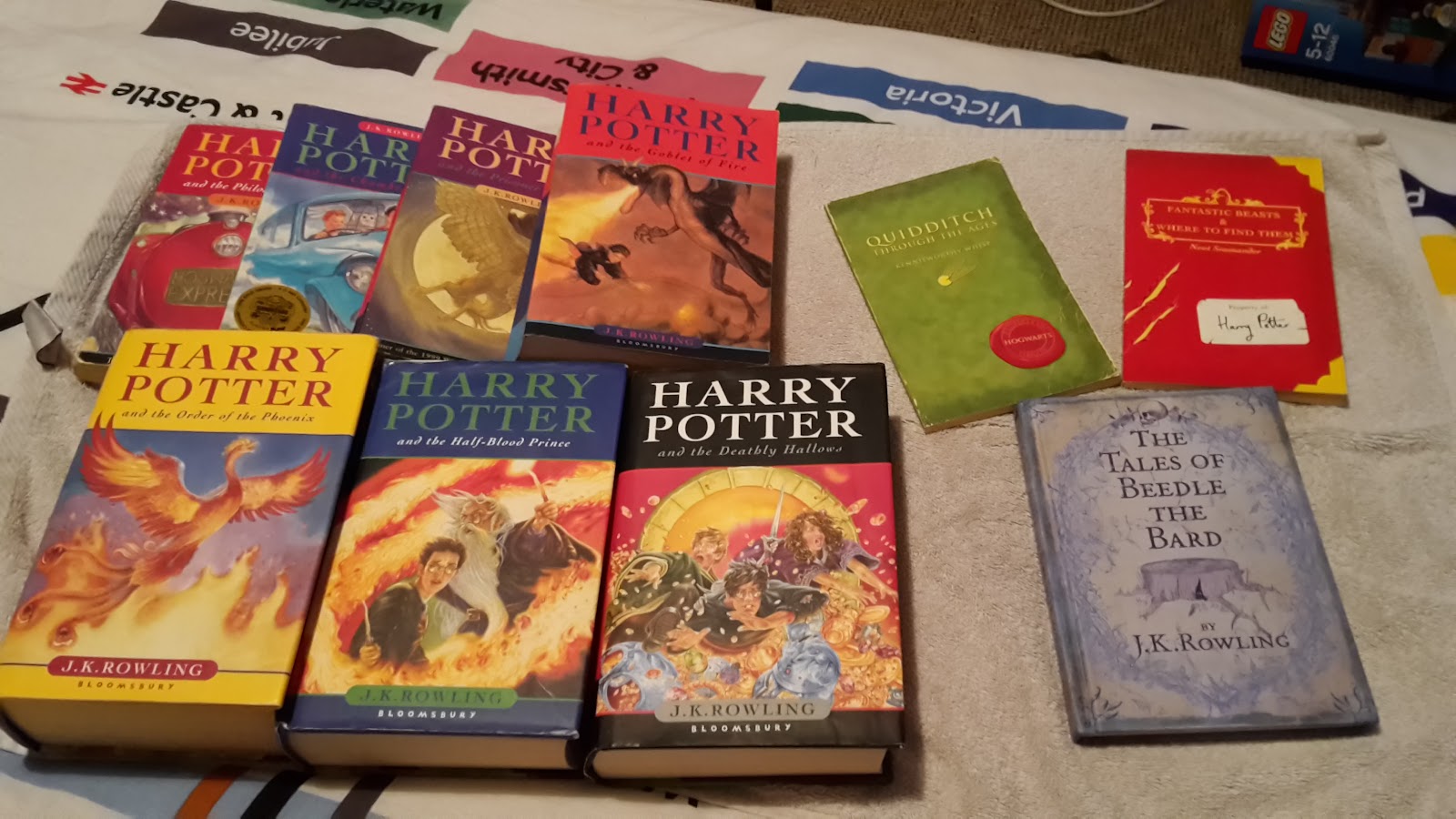 Each book has also been made into a film with the last one being split into 2 films.  There has also been other merchandise to come from it which the boys have loved as an avenue into the series such as Lego and the Lego video games.  More recently the World of Harry Potter Studio Tour has been opened in the UK which is on our to-do list.

This book features many flashbacks and gives begins the background story surrounding Harry's past, explaining how he was orphaned and how he got his scar, some elements of his past however will remain a mystery until the very last book.  The majority of characters and locations remain the same in the series and you meet all of them within this book.

The plot is based around Professor Quirrell, who is controlled by Lord Voldermort and the secret of everlasting life - the Philosopher's Stone.


Harry Potter and the Chamber of Secrets

This is the second book and as such describes Harry's second year at Hogwarts. He and his friends investigate a 50-year-old mystery that appears tied to recent sinister events at the school. The Chamber of Secrets has been opened and Ginny, Ron's younger sister, finds an old notebook by Tom Riddle ..... how are the 2 connected?   When the Chamber is opened a monster is released that begins to have a devastating effect on pupils at the school, the legend is slowly revealed as the book delves into the history of Hogwarts.


Harry Potter and the Prisoner of Azkaban

This book revolves around Harry's third year and murderer Sirius Black.  Harry has to learn how to cope with shocking revelations about his past, handle an animagnus and overcomes his reaction to the dementors—dark creatures with the power to devour a human soul.

Harry Potter and the Goblet of Fire

In Harry's fourth year at Hogwarts he is unwillingly entered as a participant in the Triwizard Tournament, a dangerous contest where he must compete against a witch and a wizard "champion" from visiting schools as well as another Hogwarts student.  This really tests friendships, including the death of another student.

Harry Potter and the Order of the Phoenix

Voldemort makes another attempt on Harry's life in his fifth year at Hogwarts.  The Order of the Phoenix is a secret society which is re-formed by Professor Dumbledore.   It's aim is to defeat Voldemort's followers and protect his targets.    Within this book an important prophecy concerning Harry and Lord Voldemort is revealed and Harry discovers that he and Voldemort have a painful connection.  The death of another person close to Harry occurs at the end of the novel.

Harry Potter and the Half-Blood Prince.

This is the book where Harry and his friends reach their adolescence and begin to find love.  Near the beginning of the novel Harry is given an old potions textbook filled with many annotations and recommendations signed by a mysterious writer; "the Half-Blood Prince."  Harry takes private lessons with Dumbledore, who shows him various memories concerning the early life of Voldemort which reveal that in order to preserve his life, Voldemort has split his soul into pieces, creating a series of horcruxes - evil enchanted items hidden in various locations.  Some of these have already been destroyed but others are still out there.  A focal character of the book dies at the end to the shock of everyone and one of the teachers is revealed as the Half-Blood Prince... but which one?

Harry Potter and the Deathly Hallows

In the last book Harry, Ron and Hermione drop out of school in order to find and destroy Voldemort's remaining horcruxes. As they search the trio learns details about Dumbledore's past.

The book culminates in the Battle of Hogwarts. Harry, Ron and Hermione, in conjunction with members of the Order of the Phoenix and many of the teachers and students, defend Hogwarts from Voldemort, his Death Eaters, and various dangerous magical creatures.

Several major characters are killed in the battle and Harry ends up in a direct battle with Voldermort - who will win?

An epilogue describes the lives of the surviving characters and the effects of the final battle on the wizarding world.


There are 3 supplementary short books that JK Rowling has written to expanded the Harry Potter universe produced for various charities.

Fantastic Beasts and Where to Find Them

This is based on a textbook that the pupils use for their Care of Magical Creature Lessons and describes the various magical animals in the books in more detail.

Quidditch Through the Ages

Is again a book mentioned in the main series.  Harry enjoys playing on the Griffindoor Quidditch team at Hogwarts and reads this book for fun.

Both of these were released in 2001 and proceeds went to Comic Relief.


The Tales of Beedle the Bard

This is another book featured in Harry Potter and the Deathly Hallows and is a collection of wizarding fairy tales.
There was also a prequel written in 2008 (which I have only just found out about).

In 2012 JK Rowling released a website Pottermore which allows users to be sorted, be chosen by their wand and play various mini games. The main purpose of the website however was to allow the user to journey though the story with access to content not revealed previously.  As the years go on she adds new details and short stories to it surrounding the lives of the characters in the books.


Ben and Noah both love playing the Lego Harry Potter video games and Ben is eager to make a start on the books, I believe at 6 he is almost ready and will be giving the first one a go later this year, as the ones following it take on darker tones it may be another couple of years before we read them.... meanwhile I am up to book 4 re-reading them.
I hate hardback books, they are so heavy and it's putting me off reading books 5-7.  I really want to treat myself to a new paperback box set doesn't this one look so pretty (until that time it is on my birthday and Christmas list).

Noah is very excited about being Harry Potter (well he'd rather be Ron but we shall see......) on World Book Day. 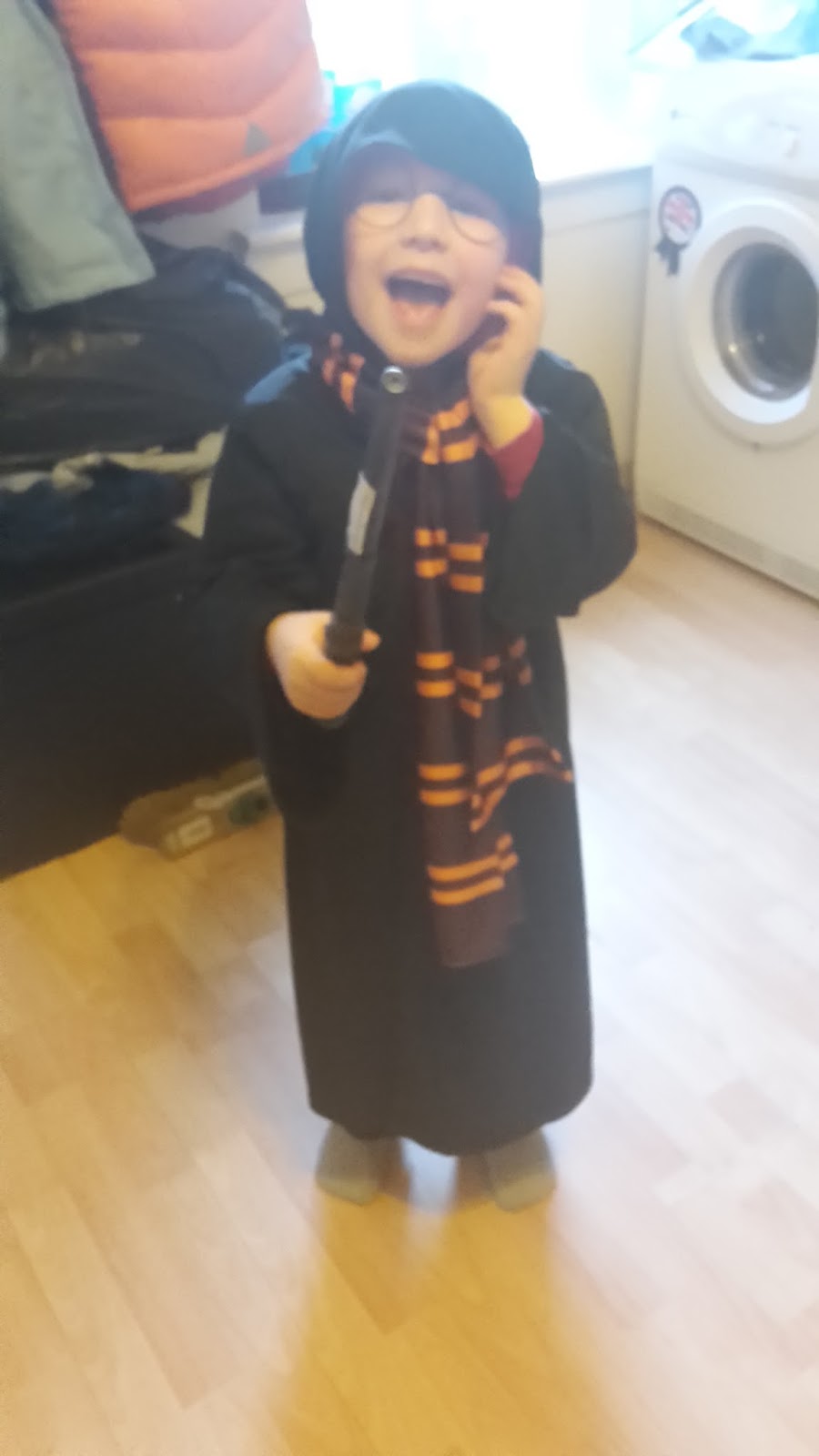 Disclaimer:  The material contained in this post is all based on my own views and opinions.  The costume was supplied by Talented Talkers in connection with George at Asda.