With Christmas now a distant memory I've almost managed to finish off the chocolate and goodies that have been scattering the house for the past few months. We've had countless take aways and meals out due to holidays but now it's time now to get back to exercise and eating healthier before December rolls around again.

If you are like me the temptation is to try and completely overhaul my bad habits, cutting out all fatty foods and chocolate but before too long the need for these treats becomes overwhelming and I end up having a couple of massive 'pig out' days.  Tesco agree that it's not good to cut out everything and that it's the little changes that add up to a big impact, for example don't walk up all 11 flights of stairs on your first day, start a floor lower every time,  have an apple instead of chocolate or have one less glass of wine a week.  Once the changes have started it's easy to take more steps to feel healthier.

I was therefore really please when I was asked to be part of the Tesco Orchard #OneLittleChange programme so I could see how the changes made to their foods can assist me to change my lifestyle. 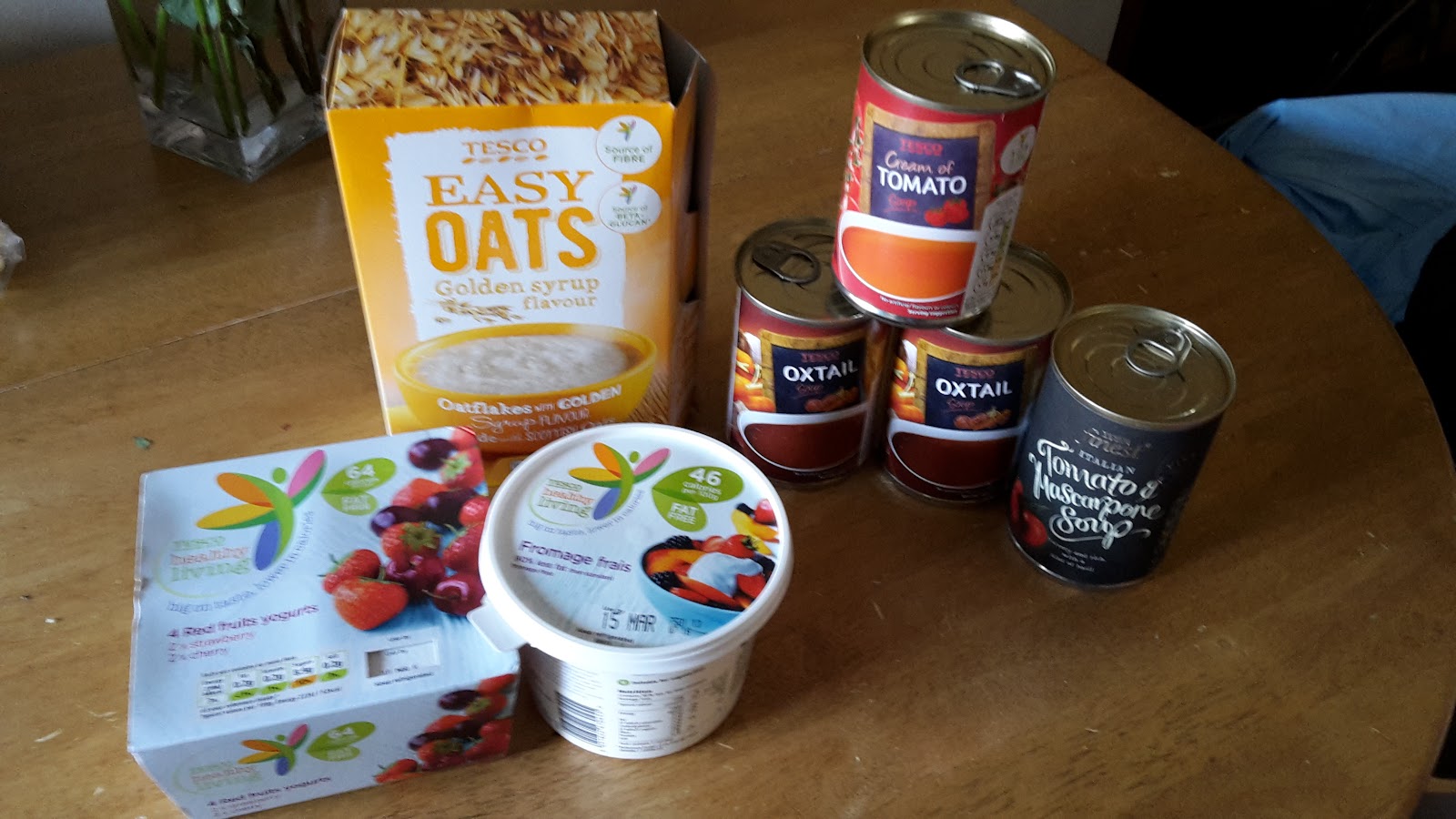 Over the last three years Tesco have reduced the calorie, fat, sugar and salt content of thousands of our their own brand products, like fruit juice, cereals, yogurts and soups, without compromising on taste. They also have a dedicated 'Healthy Living' range in selected stores.

As part of the #OneLittleChange programme I was asked to review a few items from their ranges: 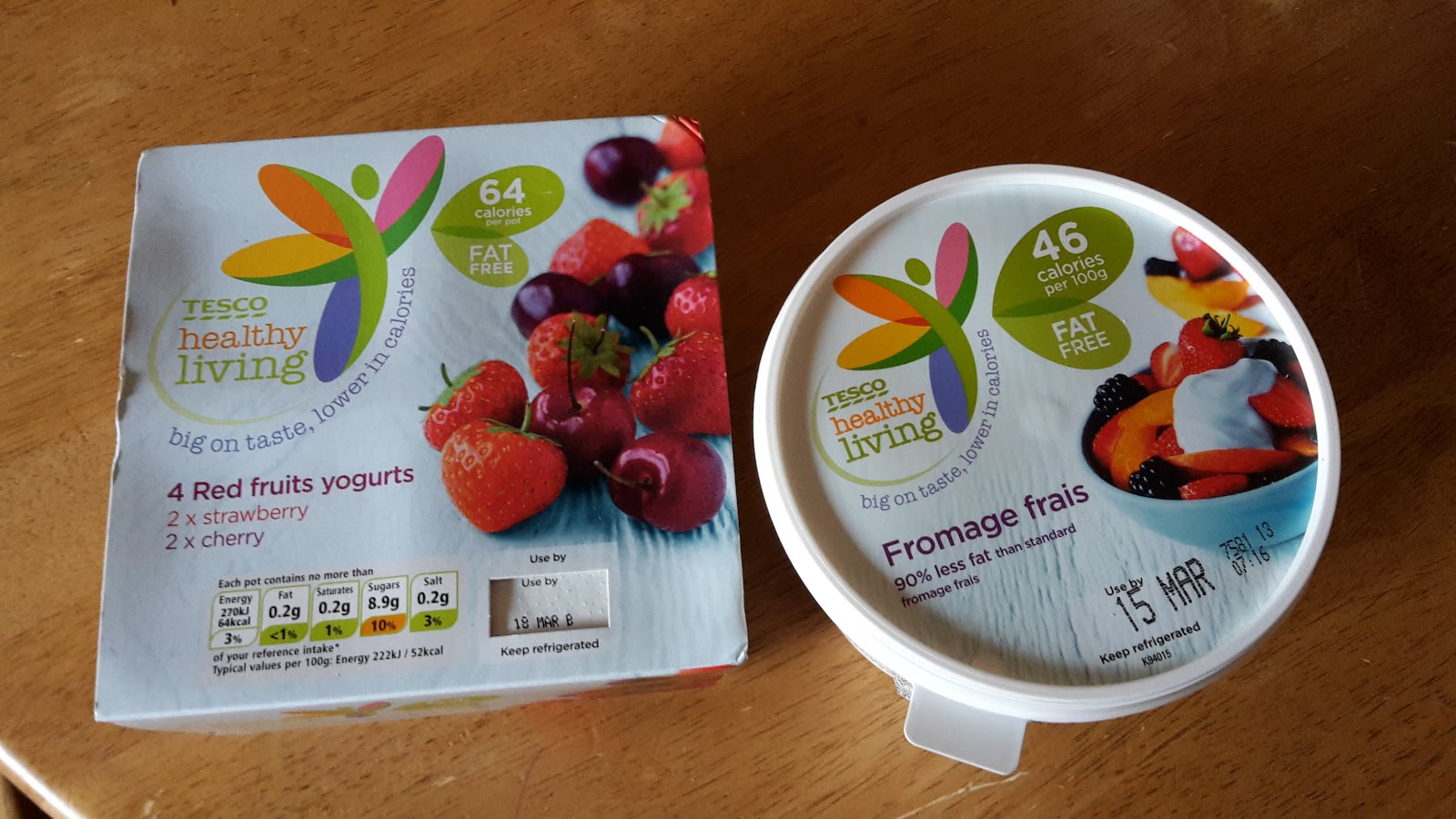 I'm not normally a yogurt person but one taste of the strawberry Healthy Living yogurt and I was taken back to my childhood.  These yogurt's have so much flavour as well as fruity pieces and at only 64 calories (fat free) make a lovely light snack or dessert.

For someone who has previously done the Weight Watchers diet I was pleased that Tesco have put the ProPoints score on the back of the packet (2 per pot).

Would I buy it again? On the downside I don't like Cherry, and the boys aren't keen on yogurts with bits in.  So at £1 for 4 I won't be buying them again.  It would be great for Tesco to release 4xstrawberry or perhaps a raspberry mix, looking at other peoples reviews they have managed to find toffee ones (yum)  For me I would rather pay a little more to be able to buy individual pots in various flavours then a multipack.   The strawberry would also make an amazing frozen yogurt dish in the summer or made into frozen yogurt pops for the kids. 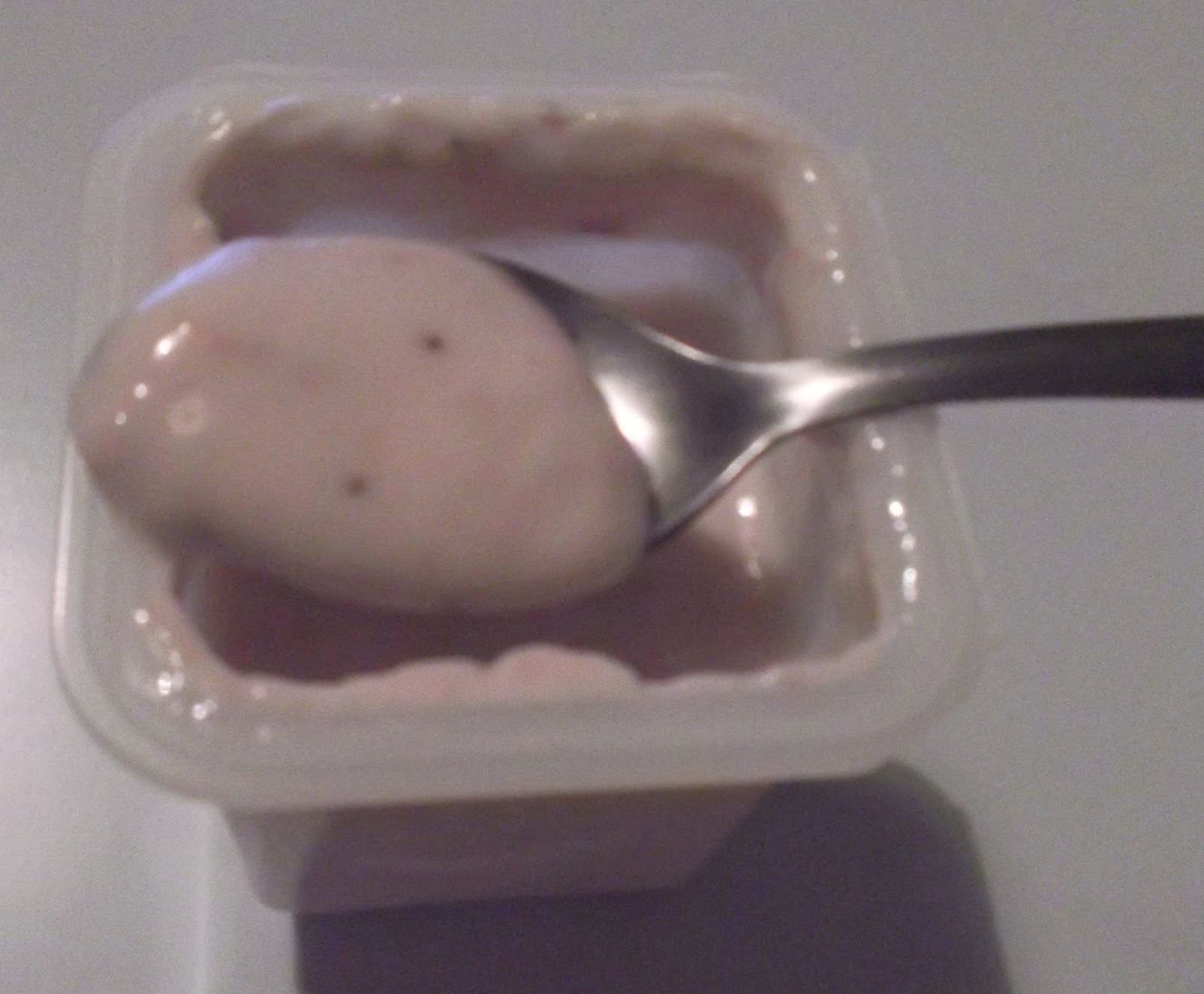 I was wary about natural fromage frais I'll be honest because again it's not something I would generally buy or eat.

I searched the Internet for some type of dessert I could make with it,  but even Google came back with a big blank.

So how else could I use it up and eat it in a way we would enjoy??  Fast forward to Monday teatime.  Ben has developed a taste for meringues and,  lucky for him,  I had some in the cupboard.  I put some spoonfuls of fromage frais on top and served with sauce,  sprinkles and strawberries.  He really enjoyed it,  and so did I.

Would I buy it again?  Its a really good price for the size (£1 for 500g's) but no, it's not something we would choose to eat normally,  I'd rather buy yogurt. 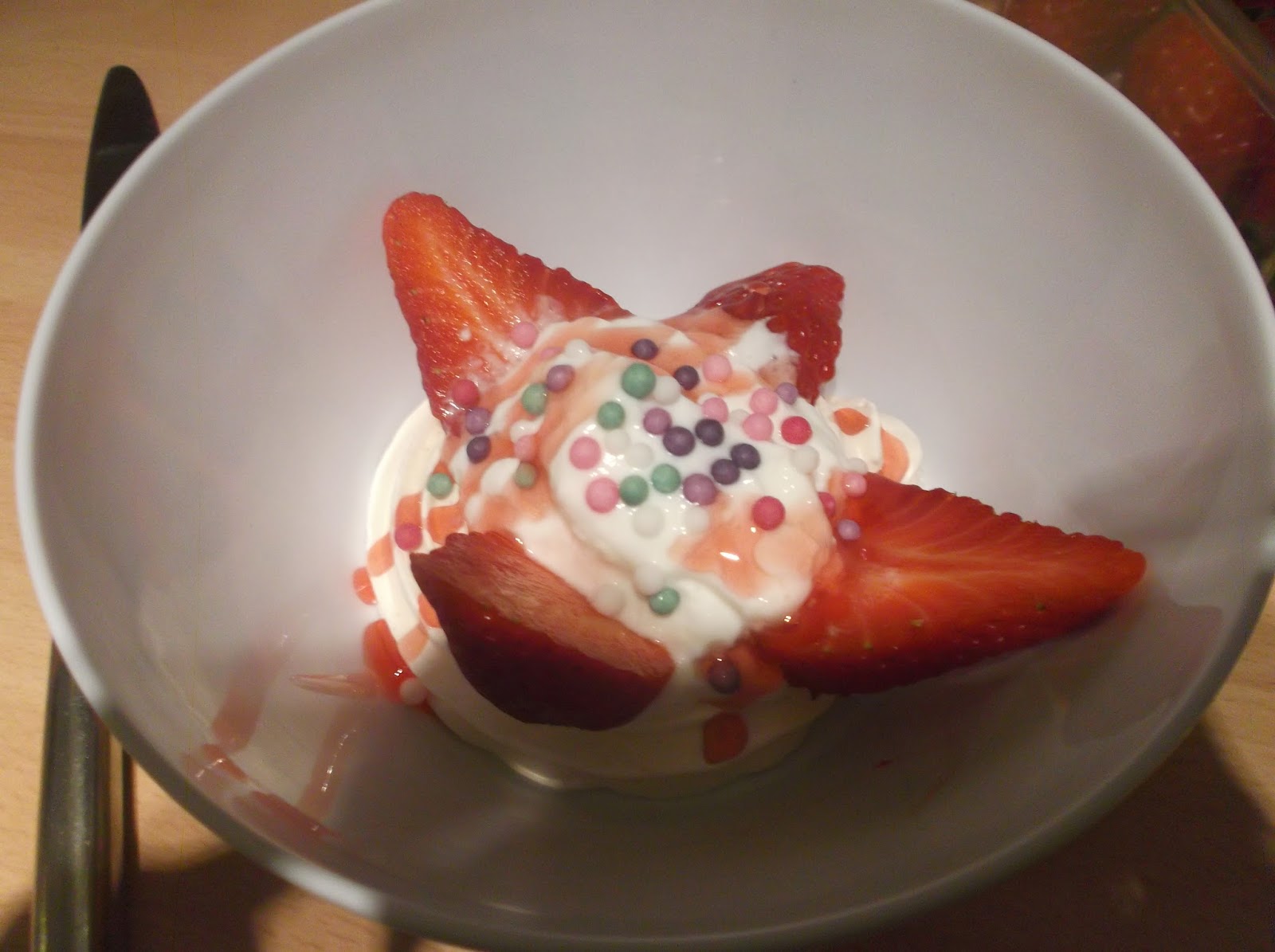 One way to kick start your #onelittlechange programme is with breakfast.  Tesco have reduced the salt, sugars and fats in some of their breakfast cereals as well as their porridge making it a healthy choice for all the family.

I was concerned as I'm a bit of a porridge snob.  I like it thick, creamy and full of flavour.  I'd read reviews from people saying it was completely the opposite; runny and flavourless.   But still try it I did and it was. ... ok.  I don't know where these people went wrong but there was no denying it was thick and creamy.  The flavour was ok, nothing special. Yes it was sweetened.... could tell it was golden syrup flavoured if you didn't know?  I think not.   What I did dislike was the crunch.  It was almost as if the oats hadn't softened enough and it really ruined the texture and experience for me.

Would I buy again?   No. Like I said I need to porridge to be just right and the crunch put me off buying again. It's easy (in winter) to continue to make #onelittlechange at lunch time with Tesco huge range of soups.   Tesco lowered the salt content in all their soups, without changing their flavour. In January of this year they successfully removed 926kg of salt from the finest range alone.

From the 25p value range to the £1 finest range there is something for every budget and taste. 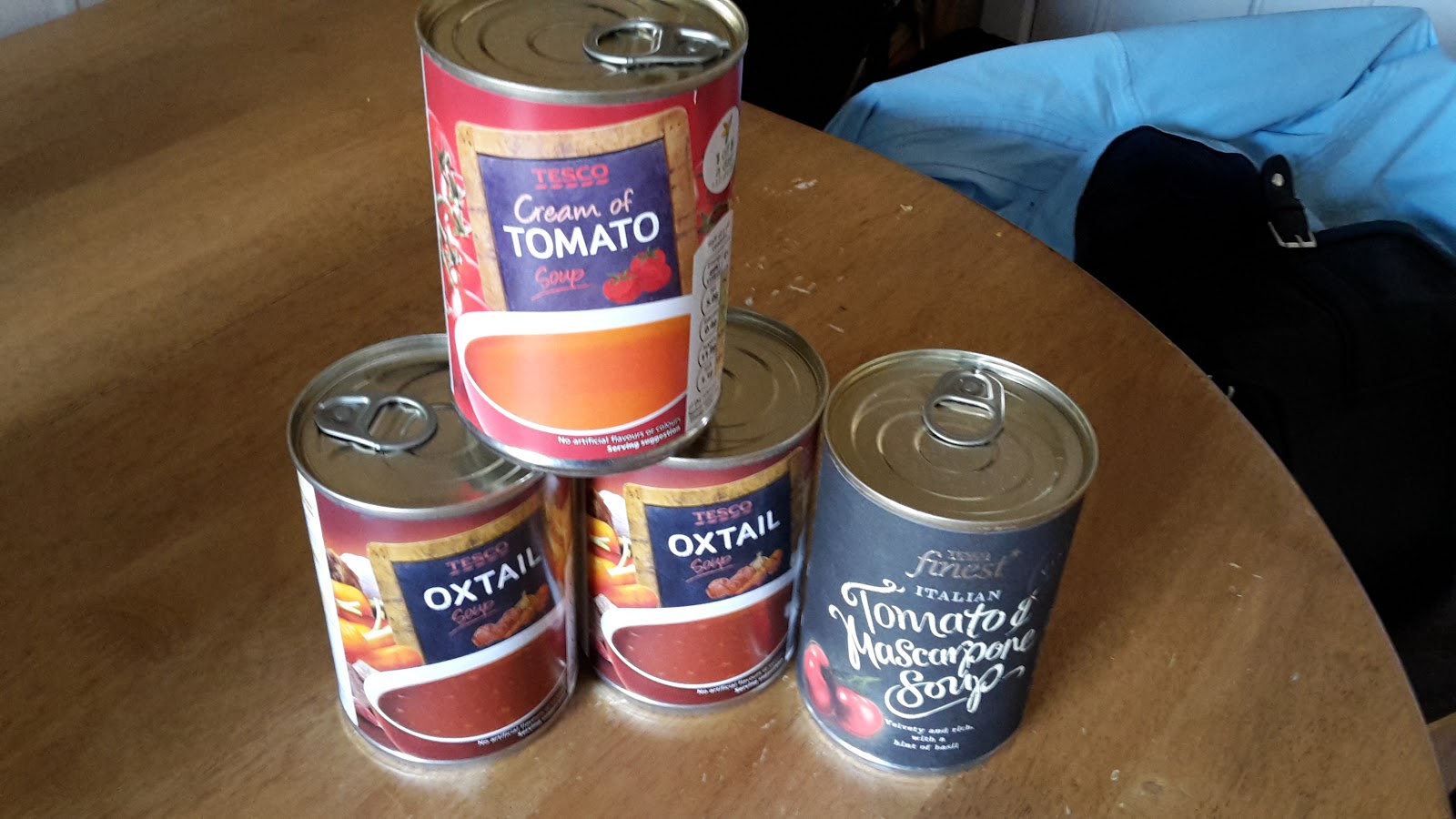 Again we do eat soup but it's not my first choice.  Hubby will eat tomato soup (only) and myself and the kids don't tend to touch it.  If I do use them it tends to be in a sauce base.  I.E  I'll add tomato soup to a pasta bake sauce to make it stretch a little further or add oxtail soup to shepherds pie to richen up the gravy.

Hubby has therefore been my guinea pig and tried both the Tesco tomato soup and the finest tomato and mascarpone.  Whilst he said the finest one did have an edge over the basic one on flavour it wasn't anything noticeable.  In fact he questioned if he would have been able to tell you it was the more expensive in a blind taste test.

Would I buy again? If we buy soup it's normally the Tesco own brand so would continue to purchase these at 45p as opposed to the Finest at £1 a tin.

Disclaimer: I received discount vouchers from the Tesco Orchard Programme to spend on a selection of Tesco #onelittlechange ranges so we could try them and tell you all about it. As always the information, ideas and opinions remain my own (or my family's).