Where you one of those kids who liked to write short stories?  So was Nigel Quinlan, as a teenager he used to mind his parents' petrol pumps, one day he decided to write a short story about ..... a phone box.  But not any old phonebox  - the one halfway down his street, next to the Post Office in his little village of Murroe in the Irish south-west.   As he grew up he worked in libraries and bookshops but his love of writing never went away, creating stories for local festivals and acts with the local drama group.   But his short story idea never went away and has now become his first novel The Maloney's Magical Weatherbox. 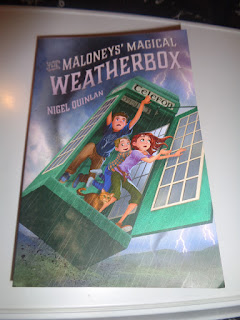 This was no ordinary phone box, this one had a secret the Seasons passed through it four times a year (actually that sounds a bit like the Magic Roundabout in Weeley, Essex, when I was growing up - no matter what the weather on one side it would be the opposite on the other!) but I digress - back to the phone box.    The phone box belongs to a family, Mum, Dad, Neil, Liz and Owen - he Maloneys.   Don't be silly they don't live in this phonebox , they own a B&B, and the phone box is right next to their house, which is more or less the middle of nowhere.   Everything runs smoothly Seasons come and Seasons go but what if one year Autumn doesn’t arrive (in fact that sounds a lot like the UK!), it has arrived like clockwork for thousands of years (we won't wonder why there were phone boxes in the stone age) and then suddenly...... where is it?

Mrs. Fitzgerald, the Maloney's neighbour has decided that she wants to be the Weatherman (woman?) and tricks Neil into freeing a brand new baby Season through which she can control a host of destructive weather elementals. The Maloney's have to put a stop to it and get the Season's back on track, this involves bog beasts, hags, a tourist of magic and a gang of secret Celtic warrior ninjas. 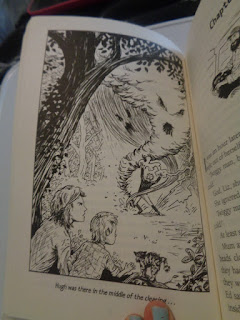 With what appears like Terry Pratchett inspiration, easy reading story and lovely illustrations by Keith Robinson and this book is a winner.

Age range:  The book is aimed at children 10-12 but Ben loved it as a family chapter book at bedtime, breakfast time, lunch time, tea time.....

If you want to follow the author Nigel Quinlan you can do on:
His blog:  http://nigelquinlan.tumblr.com/
Twitter: https://twitter.com/Nigellicus   @Nigellicus

N.B.  This book also goes by the title The Magic Maloneys and the End of the World and has a slightly different cover.
I know which of the 2 I prefer but I'd be drawn to most on a bookshelf but will let you make your own decisions.

The book is already out in the UK and is due for release in America in July.

Nigel - if you happen to be reading we know that every blog has it's naming history ..... please do tell us the story behind http://uglychicken.livejournal.com


Disclaimer: This book was sent to me free of charge by Orion Children's Books.  All words and opinions are my own.
Posted by Scouting Mummy at 09:00