Last weekend we decided it was time for baking,.. but what.  Then inspiration hit, how about a hugeee Jaffa Cake.  So I set about seeing how other people did it.

But then I remembered I don't 'do' baking (because my oven hates cakes).  So I set about thinking ... I am positive this can be done in the microwave. 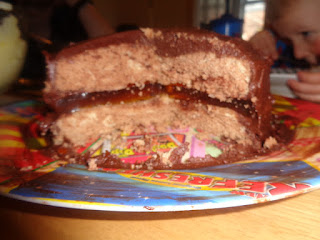 Icing (well that's up to you) 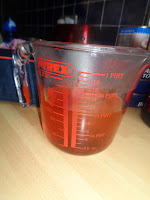 
Day 1:
Make up an orange jelly.  Instead of adding 1pt of water only use half.  This makes the jelly a lot
thicker.

Put the jelly into a silicone cake mould to set.
Place in the fridge.
Tip: Put the cake mould on a plate this will keep the jelly level.

Day 2:
Make up the cakes 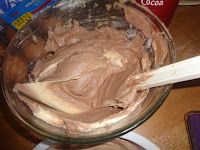 1) weigh out your ingredients

2) cream the butter and sugar in the mixer

3) Add the eggs and flour 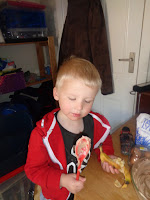 Tip: We also added a bit of cocoa powder here just to give it a more chocolaty flavour.

5) Split the mixture between the 2 other cake moulds.

6)  Put the first cake in the micro wave for 4 minutes  As tines vary depending on wattage  if your cake looks like it isn't cooked put it in the microwave for one minute each time till you think it is cooked.  Repeat with the other cake.

Leave the cakes to cool. 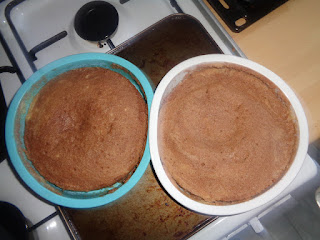 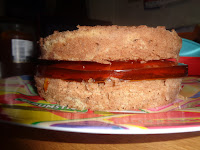 
You need to ice your cake next.

I was going to use chocolate butter cream.... but I started to make it up and ran out of icing sugar  (I thought it was a new box - it wasn't.....typical.  So we ran over to Morrisons who apparently don't sell it (or if they did it wasn't near flour and cake ingredients or icing and we couldn't find the sugar section).

So plan B ..... we bought a tub of Betty Crockers Chocolate Fudge Icing and I was surprised just how far the tub spread it covered the cake with a really thick layer of delicious icing and still some left to put in the fridge for emergency chocolate fixes.

By the time I finished the jelly bit was starting to collapse making it harder and harder to ice so I would suggest putting it back in the fridge every 10 mins to 'set' again if you are not a quick icer, 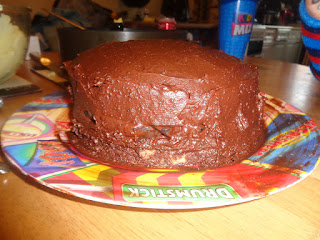 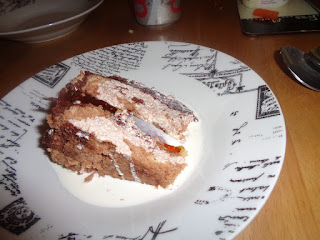