Our visit to the Children's Hospital

My plan for the weekend at 12pm on Thursday - finish work, chill at home then have a lazy Friday catching up on all the stuff that hadn't been done in the week (anyone fancy a mountain of washing up?) while the kids are at school.  After all this is Noah's first full week of school and therefore the first day I've had to myself in a very long time.

In reality ....... I get a phone call at 3.50 from hubby telling me he's off to the Children's hospital with Noah as he's fallen over on his way out of school and his elbow looks a little swollen.  Ah well, if he's anything like Ben it'll be just bruising, we'll be home again in a couple of hours......

So we got booked in and waited for the consultant.  She took one look before declaring she was sending him for an x-ray and would "be very surprised if it came back normal".  We were seen by x-ray really quickly ...... 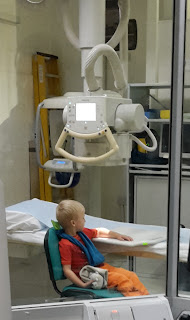 ... and yup sure enough he had shaved a piece clean off his elbow bone (I'm sure it has a medical name) and would need putting in plaster to fix it back together.  The question was whether this would be enough.


Again we were seen really quickly by the plaster team who wrapped him up before having another x-ray.  It hadn't done the job, the 'extra bit' was still loose in his arm and he'd need an operation. 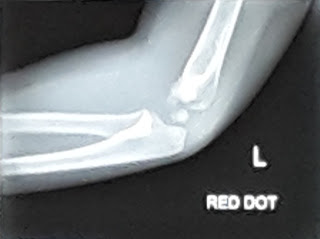 Unfortunately hubby had let him have something to nibble on when he got to the hospital as he was hungry after school which would have meant they couldn't have operated until at least 10pm, instead we were sent home at 7pm and asked to come back Friday morning at 7.45 when the department opens. 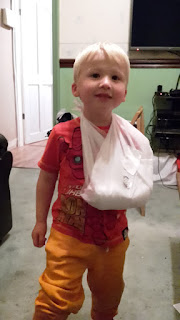 So Friday morning (with hubby having to take time off work) he took Noah down to the Children's Hospital and I stayed at home to take Ben to school setting off to meet him afterwards.  When I got to the hospital (about 9.30) Noah had already been taken into theatre with an estimated completion time of an hour.  We were given a fab contraption which allows you to go anywhere in the hospital grounds (if you stray too far music goes off to warn you).  When your child is out of theatre and in recovery then this vibrates, you find the nurses and they let recovery know to come and get you.  This is brill if you're not one that enjoys sitting around or you want to go and get something to eat but are worried the staff won't be able to find you. 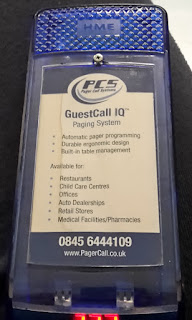 After 2 hours we went to find a nurse as we were getting a little concerned about how much longer the op was taking, as we did so the nurse looking after him spotted us and let us into recovery as he was stirring.  I questioned why were weren't buzzed and another nurse gave a flat "because he hadn't fully woken up and I didn't do it yet",   This second nurse had no people skills what-so-ever and the idea we may have been concerned was to her of no importance.  We were then taken up to the ward on the Theatre Admissions Unit (TAU) where Noah slept for another hour. 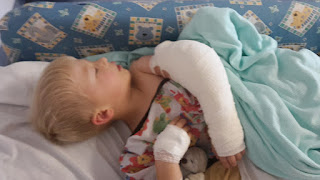 The staff here were, on the whole, lovely.  They chatted when they came to do his obs, made him some toast when he woke up and had a drink ready.    Well over an hour after getting to this ward we met another nurse who made it obvious we were the least of her priorities.  She asked if we had been told what had happened in the op (we said no) and she to be honest didn't really seem that bothered and didn't actually explain anything other than what type of pot they had put on (we'd already been told this info).  We were told that we would need to return in a week for him to be checked and a new cast put on and that they were trying to make an appointment.   I made (what I thought to be) a quite reasonable request for it to be outside of school pick up/ drop off due to Ben and working arrangements.  To be told "well I'll ask but you'll just have to take your other son to school late won't you", I made her aware this was not a sensible suggestion.  Of course Noah's health comes first but this absolutely astounded me..... and yes they did book it for 9.20am and told me if I didn't like it I could ring them myself and try to get a different time, fortunately it's on a day my work will be flexible with me going in late.

As soon as Noah was more alert he asked to go and play with the toys he'd been playing with before his operation and we were told this wasn't a problem.

Hubby was soon sent to tell us if he wanted to play he could go to the discharge room where there were toys and a TV.  OK, except there weren't any toys.  There was a handful of books and a couple of baby puzzles so we sat and watched cartoons on TV until they came to do his sling/ take his cannula out and let us go home (1pm).  I mentioned we'd have to go and get some more paracetamol/ ibuprofen as running out and this is exactly what I had to do, even though the child in the bed next to us got a prescription for it.... perhaps it is because we are working parents??  obviously it's not expensive but if he's going to be in pain/ plaster for 4 weeks+ it's all going to add up.   I'm also not sure how the school respond to giving pain killing medicines if they are not prescribed, luckily we only live 5 mins away so can nip up and give him a dose if required. 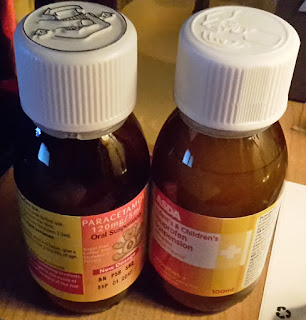 I'd like to thank Alison (in recovery), Emily (student nurse on the TAU), the nurse who did his obs also the male volunteer who made Noah toast (both on the ward, who's names I didn't catch) and everyone we met in A&E at Sheffield Children's Hospital as they were lovely, nothing was too much trouble and they are just the sort of people you want looking after your child.  As for rude 1 and 2 I didn't get their names and that's probably a good thing,, I pray they were just having a bad day!!

As for Noah, he wasn't fazed by the experience in the slightest.  He only remembers he has a cast on when he tries to move or it hurts a little.... and it's not affected his ability to play on the PlayStation in the slightest! 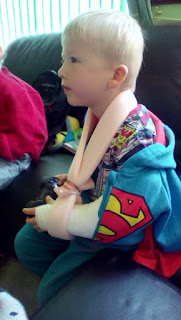 I'd also like to thank the Teddy Bear hospital as I'm sure our visits to you have helped the boys have no fear of hospitals.