I've just finished watching Hackers Birthday Bash - 30 years of Children's BBC on iplayer and it brought back soo many memories of presenters from the past.  I didn't recognise all of them, my prime CBBC years being probably 1987 to 1997 but these ones certainly shaped my past.

Before 1985 the BBC did show many many programmes fir children but these were shown independently with an voice-over in between, at 3.55pm on 9 September 1985 Phillip Schofield entered the 'Broom Cupboard' and the format changed.  Now there were live presenters doing the continuity links for the programmes.  The presenters sat behind a large control desk in a very small room, nicknamed the 'Broom Cupboard' where they talked to callers, read letters and birthday cards and filled the gaps when a programme didn't run to plan.


Here's my run down of the presenters that shaped my childhood...

Andi worked in the 'Broom Cupboard' slot from May 1989 to September 1993 before moving to present one of my favourite Saturday morning shows Live and Kicking 1993 to 1996.

Edd was Andi's puppet sidekick from 1988 in the 'Broom Cupboard', initially with Andy Crane presenting.

Andy was in the 'Broom Cupboard' from 1986 - 1990.  He moved to rival channel ITV to present another weekend morning favourite Motormouth in 1990.

Best known now for his daytime TV shows used to be a CBBC presenter in the 'Broom Cupboard' from 1985-1987 when he moved to present another of my Saturday morning favourites Going Live.

Gordon was Philip's puppet sidekick, from 1985-1987 before going onto appear with him and Sarah Greene on Going Live.  There's been a teaser recently that Gordon may be making a return to our screens so watch this space...

Simon appeared for various segments in the 'Broom Cupboard' between 1987 and 1992, hosting weekends, school breaks and birthdays in the morning.

Philippa appeared as a presenter from late 80's until 1994 alongside Toby Anstis. 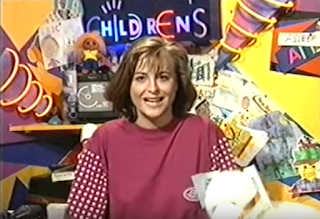 Otis presented alongside his human counterparts from 1994-1999.   I used to love him.

Although Zoe is mainly remembered on CBBC for being part of the Going Live team she is officially a 'broom cupboard' presenter as she held the hot seat for 2 weeks in July 1994.

Recently a presenter on Cbeebies, the spin off channel from CBBC for younger viewers Chris was presenting when I was little, 1993-1997.
I wrote a blog last year about the time he released a single...... did you buy it?


How many presenters do you remember?  Who was your favourite?
Posted by Scouting Mummy at 14:39