This year sees the first ever Swizzels Trick Or Treat Trail at all three Gulliver’s theme parks in Warrington, Matlock Bath and Milton Keynes throughout October half term through to Halloween weekend and we've been invited to go along and experience the spooky magic.  So the boys faces painted (Noah wanted to be a yellow angry bird and Ben was apparently "Batman Fake" we set off to Matlock Bath to experience the Swizzels Trick or Treat Trail.I refrained from doing my own make up given that it was a 2-hour journey on Public Transport! 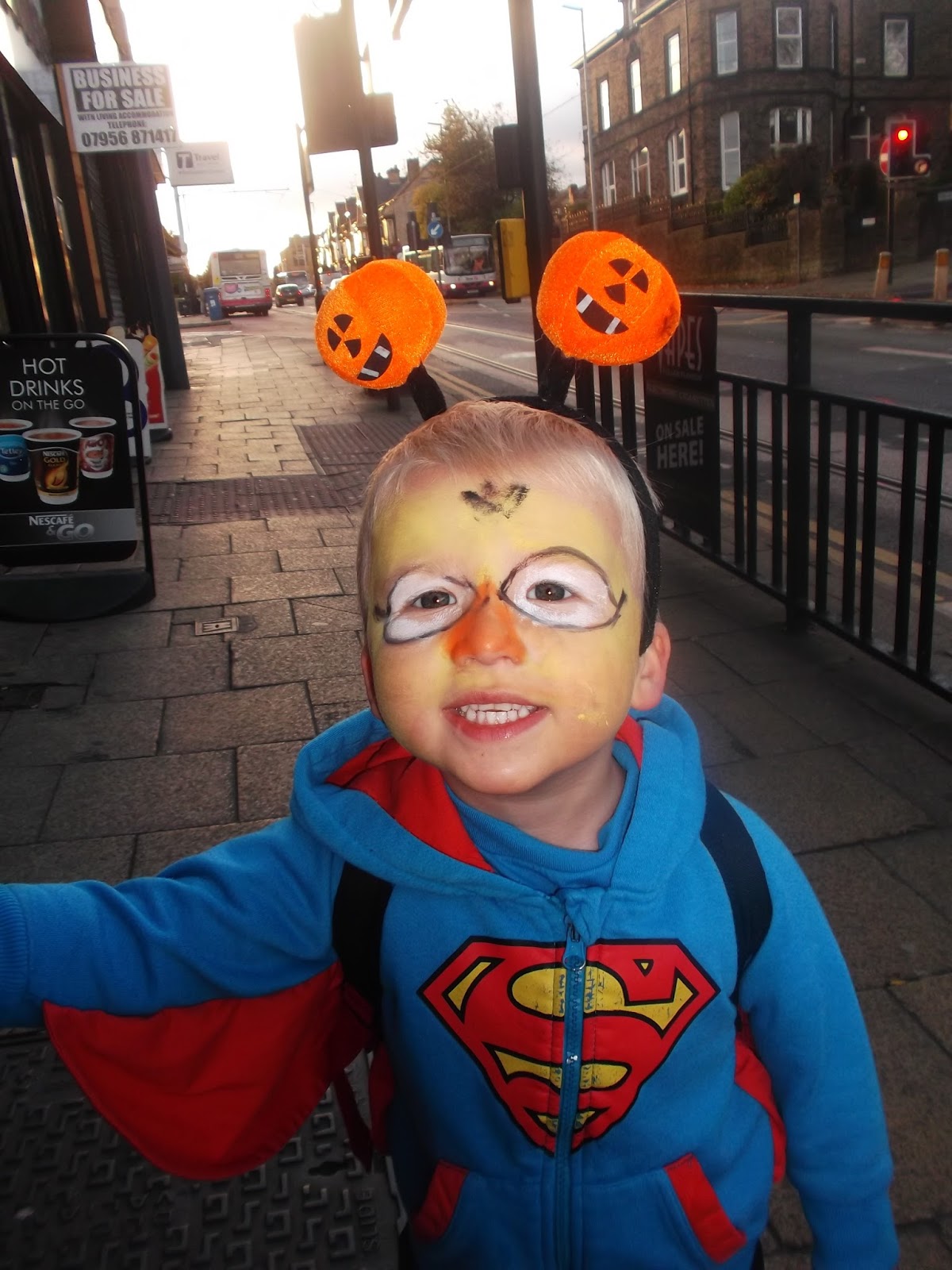 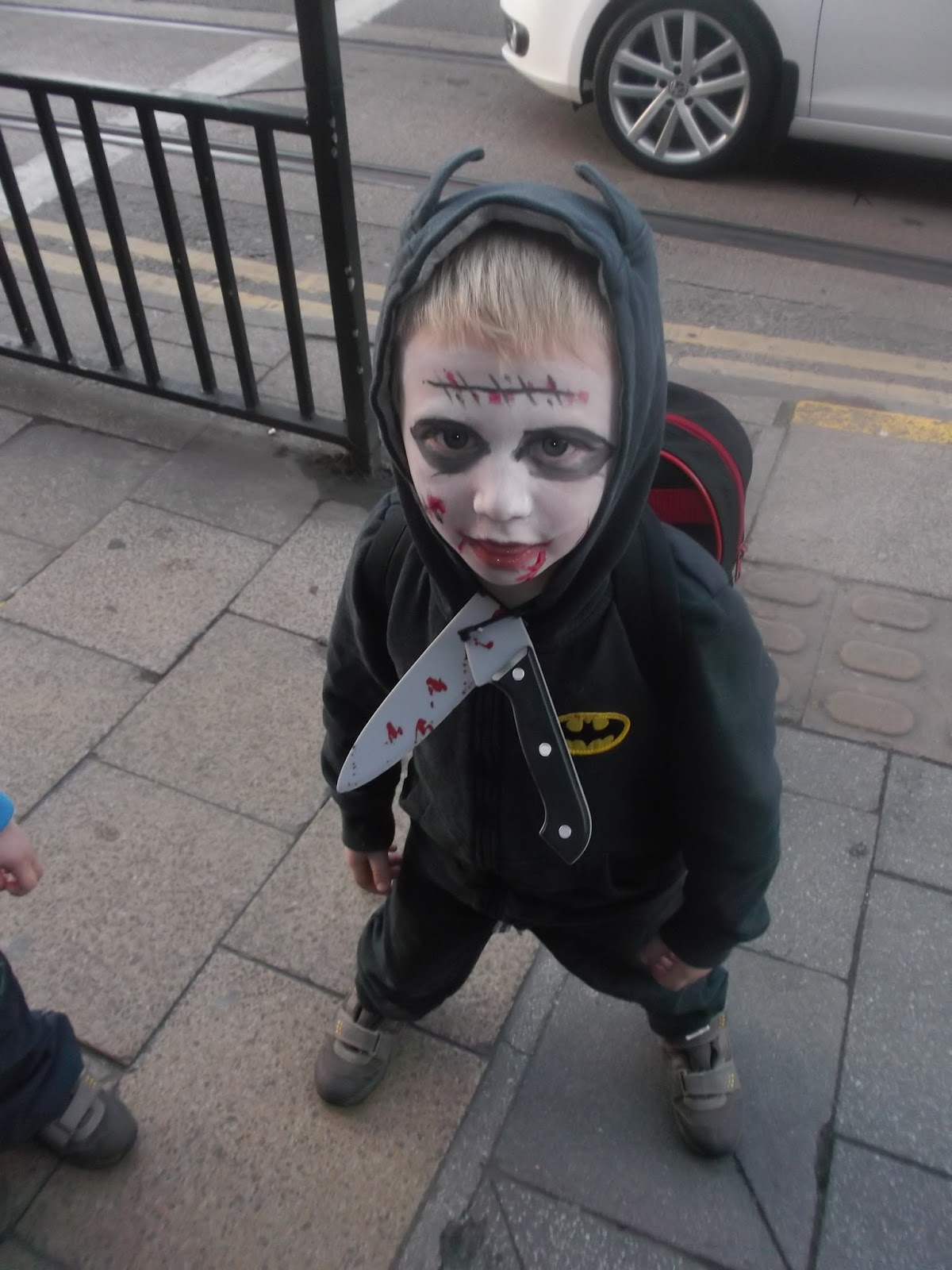 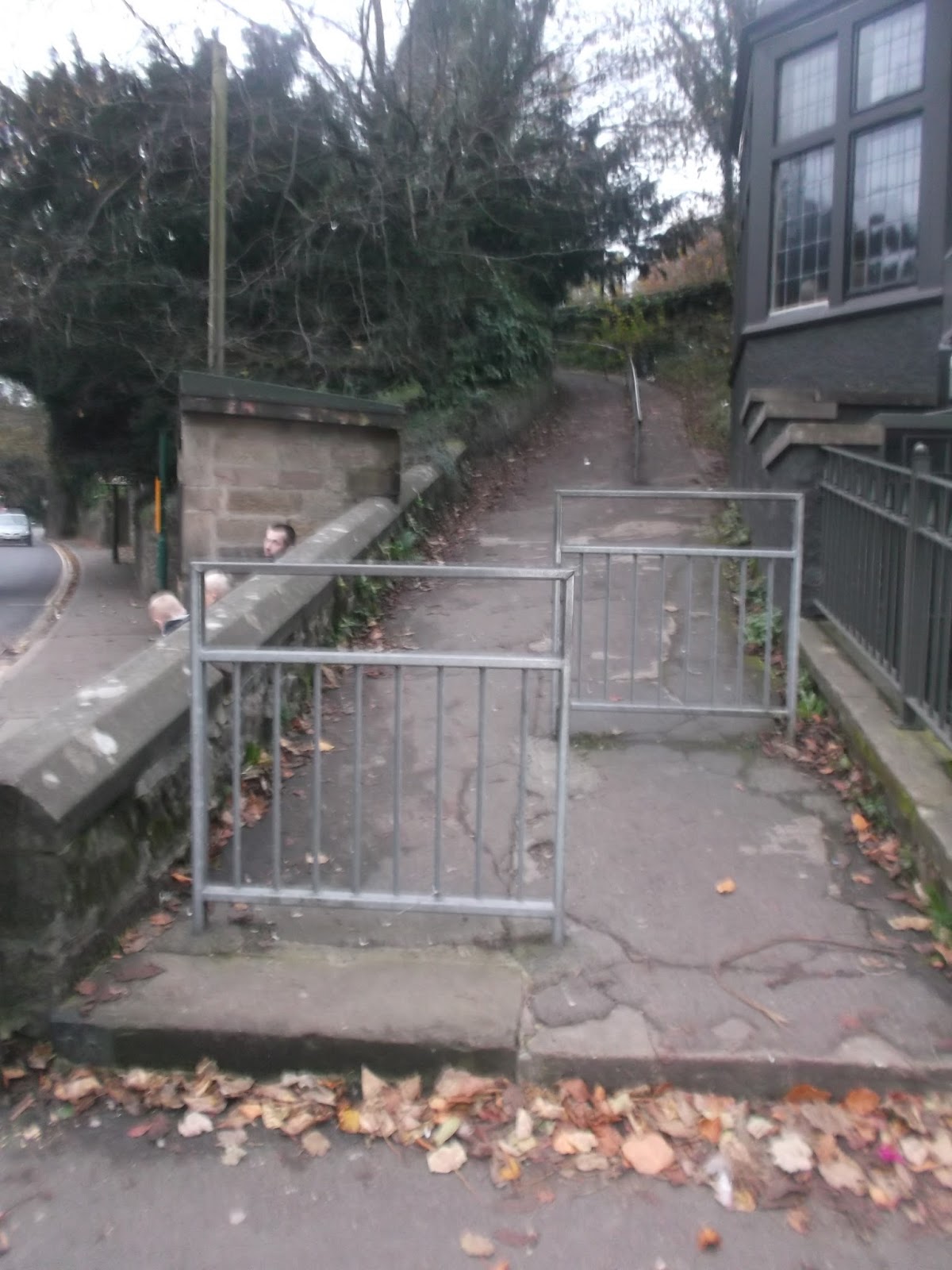 The boys were eager to wear proper Halloween outfits but I thought we'd be wearing coats all day and there was little point, how wrong I was the weather was pleasantly mild for October and the coats only came on at lunch time.

Gullivers itself was a little tricky to find as we got off the bus and told to "follow the people in front" who had been given directions by the driver.  Sadly the family had absolutely to sense of direction and after a 15 minute walk in the wrong direction we turned around and found the shortcut right next to the bus stop.  Here's a hint - look at the Fishpond Hotel and on the left is a lovely alleyway ... it takes you right there.


Thanks to an early bus we made it to the park for 10.30 ready for opening and jumped the queue (thanks Swizzels) we then hopped on the chairlift to Dinosaur Kingdom where we found our first Swizzles Board for Creepy Crawlies.  Unfortunately despite the park opening at 10.30 it appears the rides do not wake up until at least 11.30.  Dinosaur Kingdom was deserted and desolate and (once we worked out what the board meant) we forgot to go back later on to see what fun awaited us. 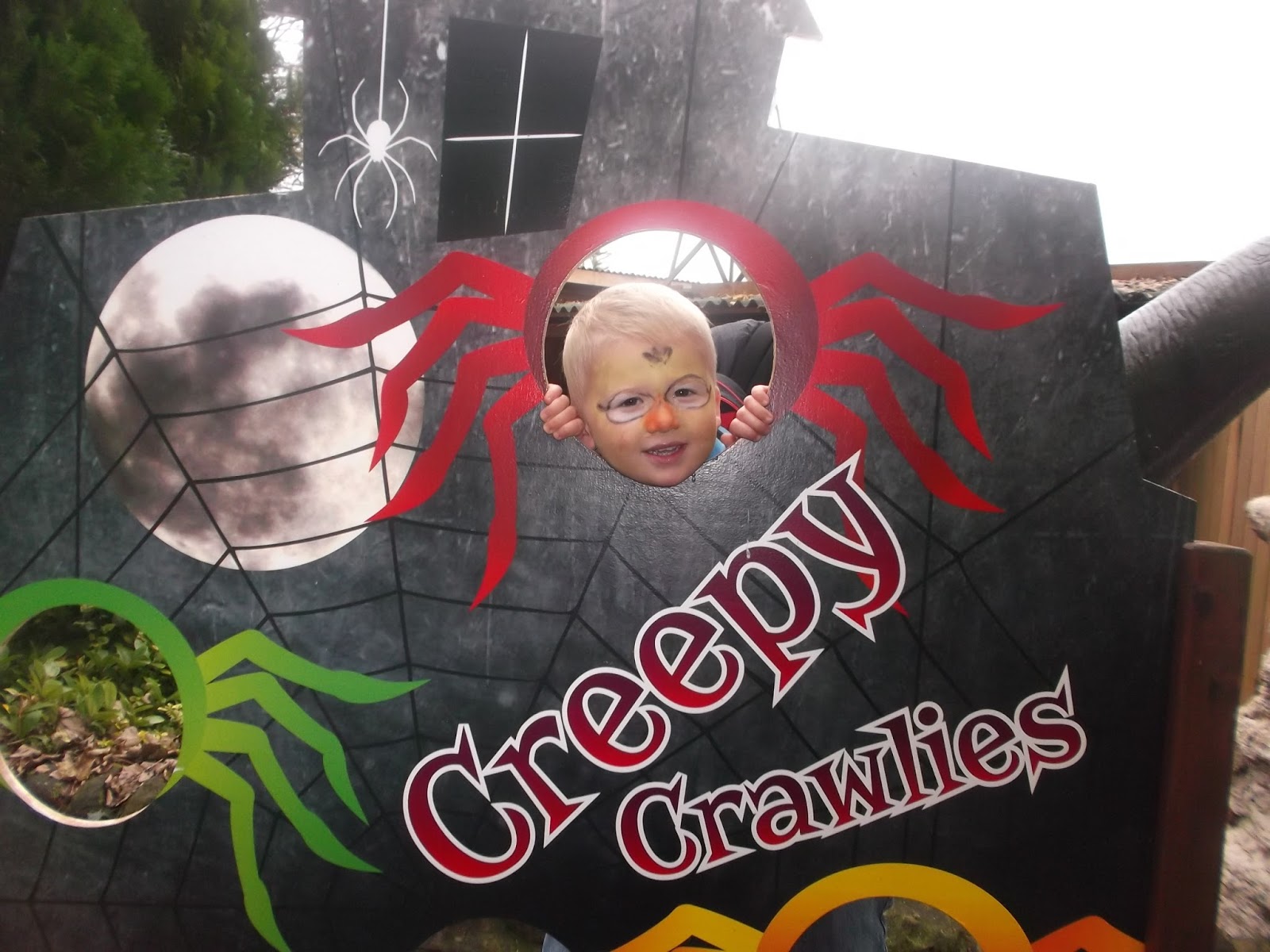 You see I expected a proper trail, a treasure hunt if you like to solve challenges and win prizes.  What I didn't expect was to have to find boards (with no indication what to do next), enter closed attractions, be told off and generally guess the trail (sorry Swizzels, Gullivers really let you down).

I would have expected Gullivers to have produced a factsheet (like the one I have made in a matter of minutes below) to explain the trail and the fun that was in store, the park was quiet, the Swizzels experiences even more so as I expect people just didn't know what to do or expect like us.  I am hoping you are reading this before you go so your children can experience the trail as it could be a really great addition to your day out. 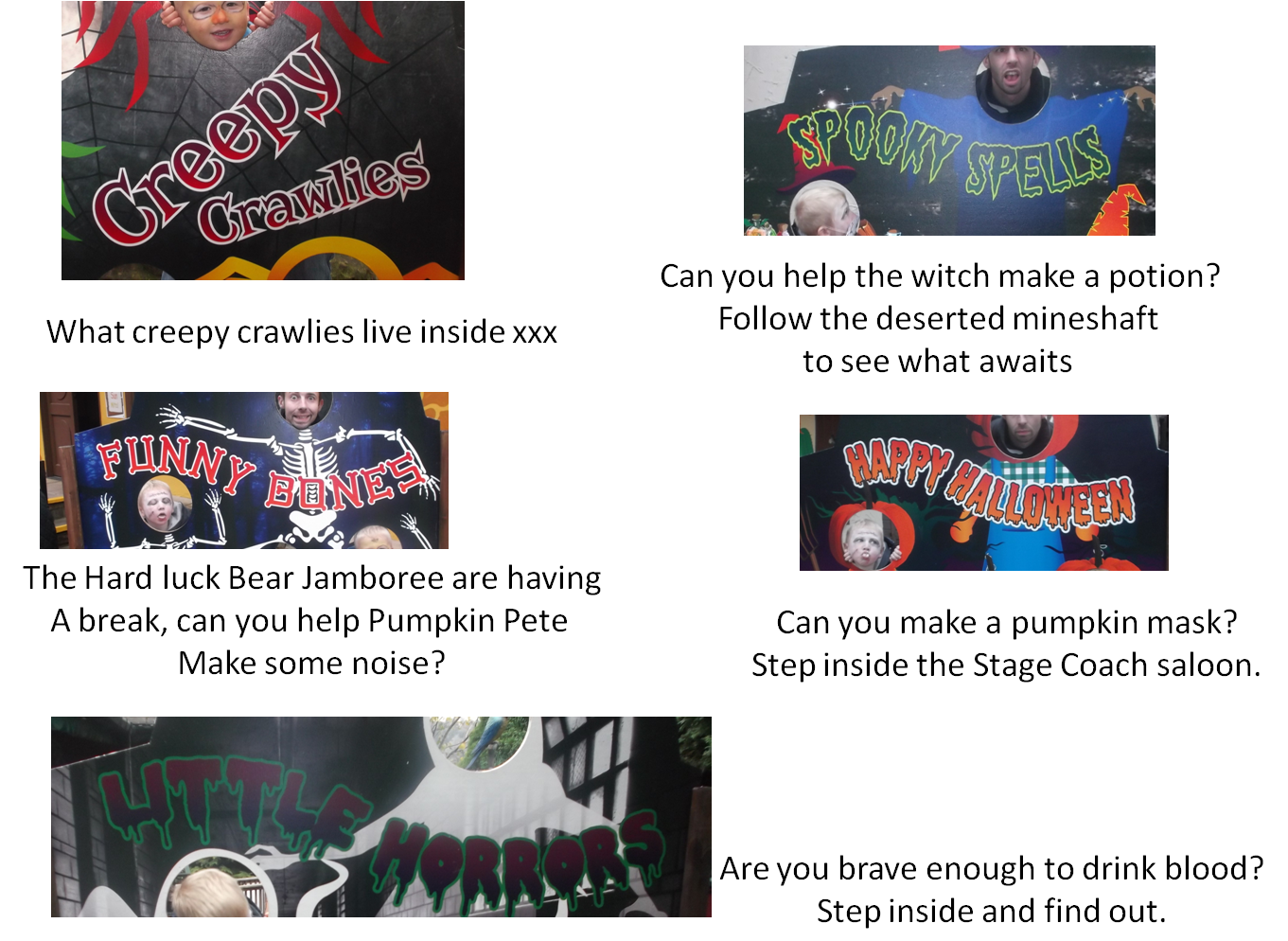 We did find a giant love heart towards the end of the day which hinted at where things were but by then it was too late for us.  This is such a simplistic idea that could have easily been made into fliers. 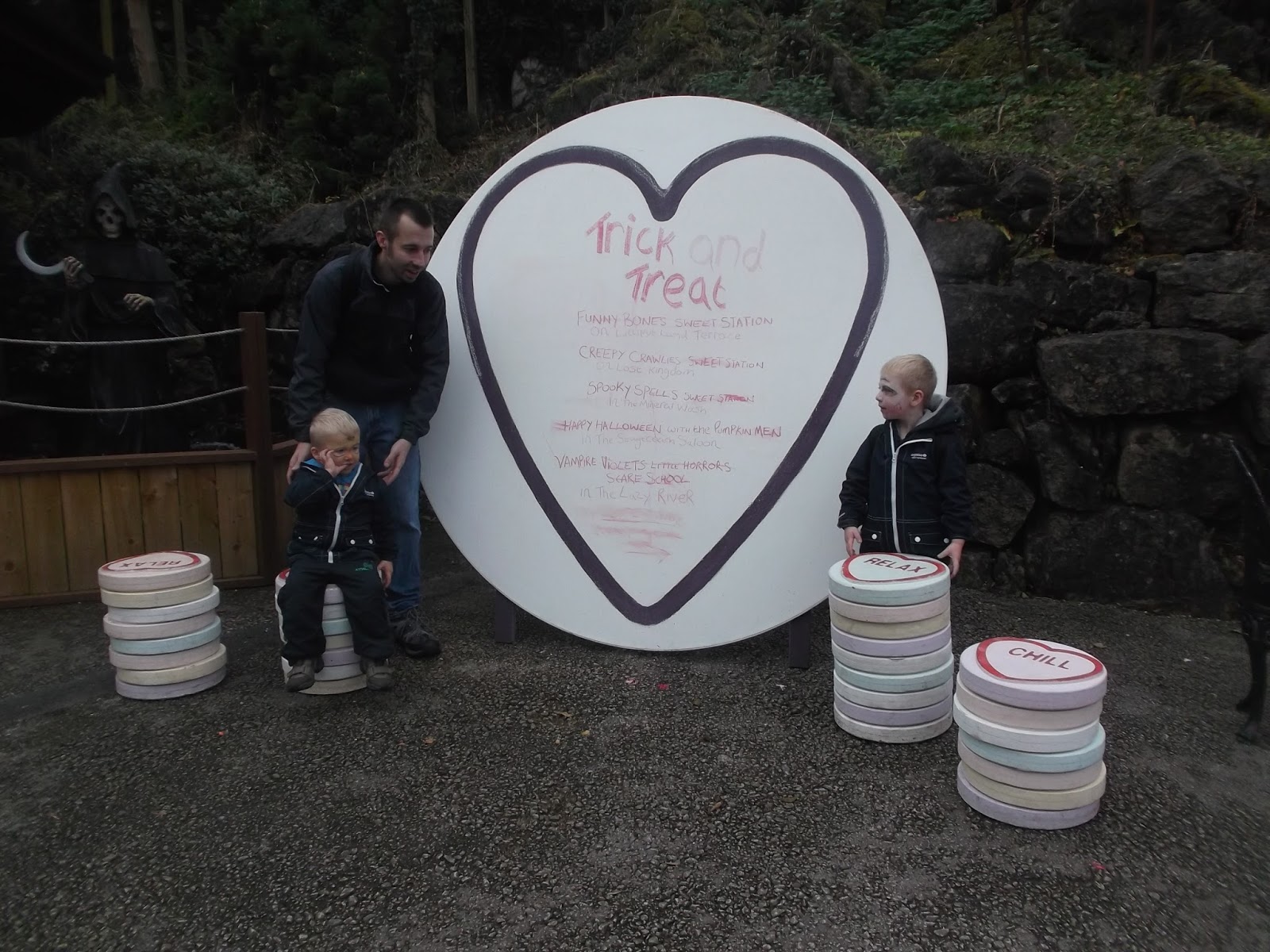 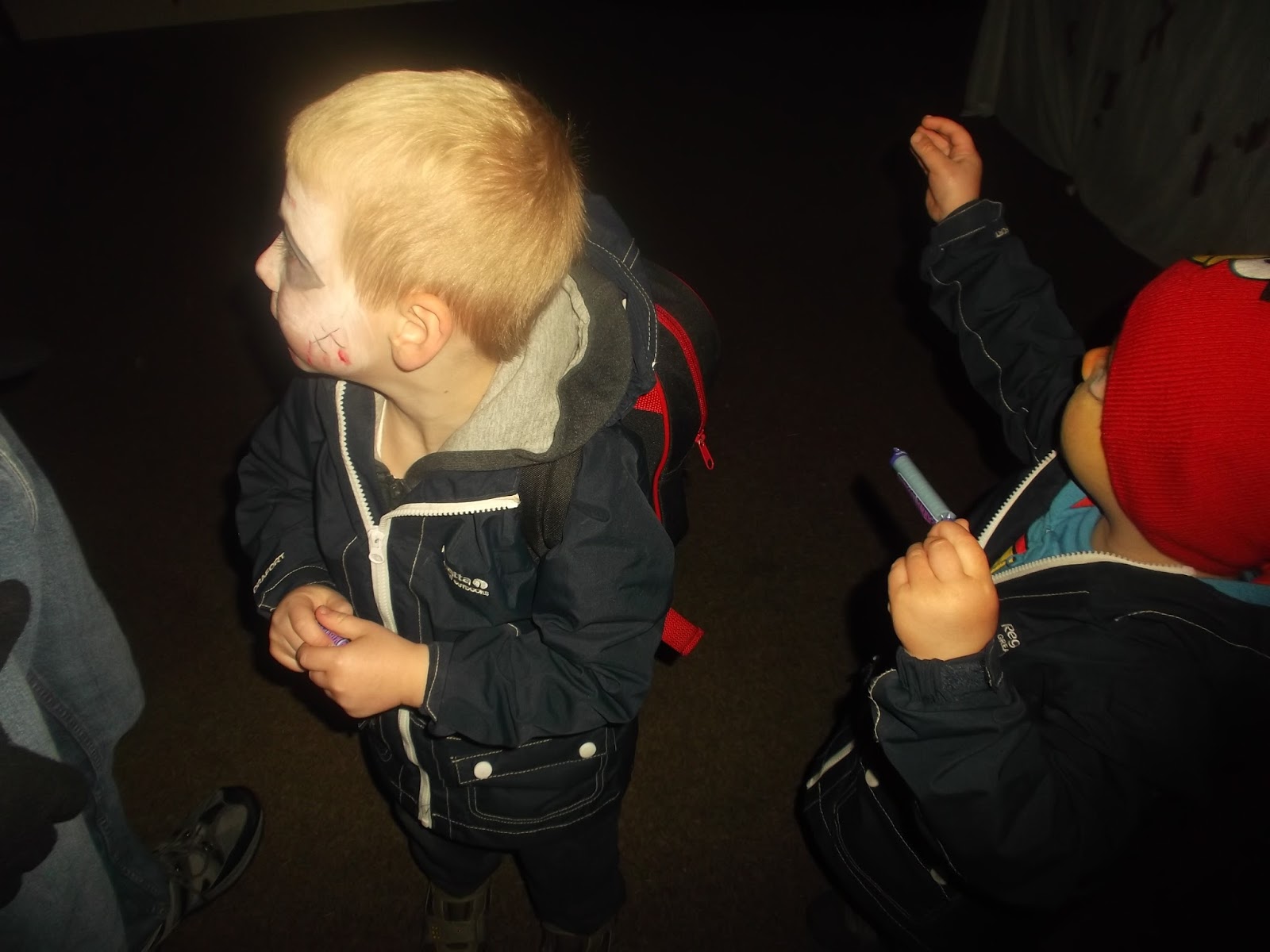 Anyway back on the hunt for sweets, where was I..... oh yes... we went to the lazy river and found Violet.  Who invited the boys to try some blood and played a game of 'Violet says' with them.  Violet
was lovely, very friendly and attentive.  The boys happily accepted their reward of some yummy Swizzels Parma Violets. 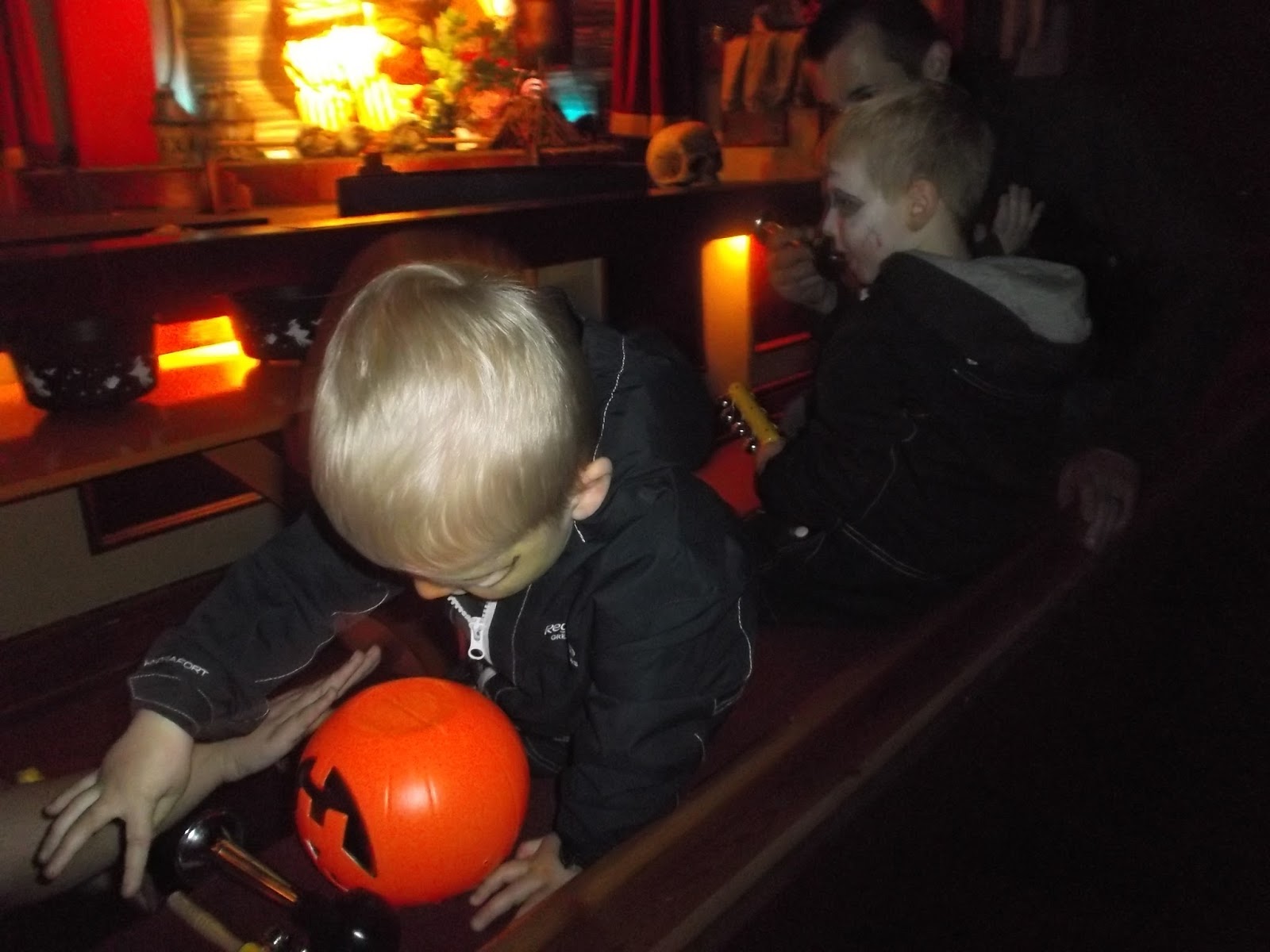 The next stop we came to was Funny bones where, after going through the open door into the Hard Luck Bear Jamboree and being turned away as they last people hadn't finsihed,  the boys got their session.
There was no sign of Pumpkin Pete but the boys played a game of 'Pumpkin Pete says' with musical instruments and won a Halloween themed drumstick lolly.

After a few more rides we arrived at Western World where there were 2 challenges to complete. 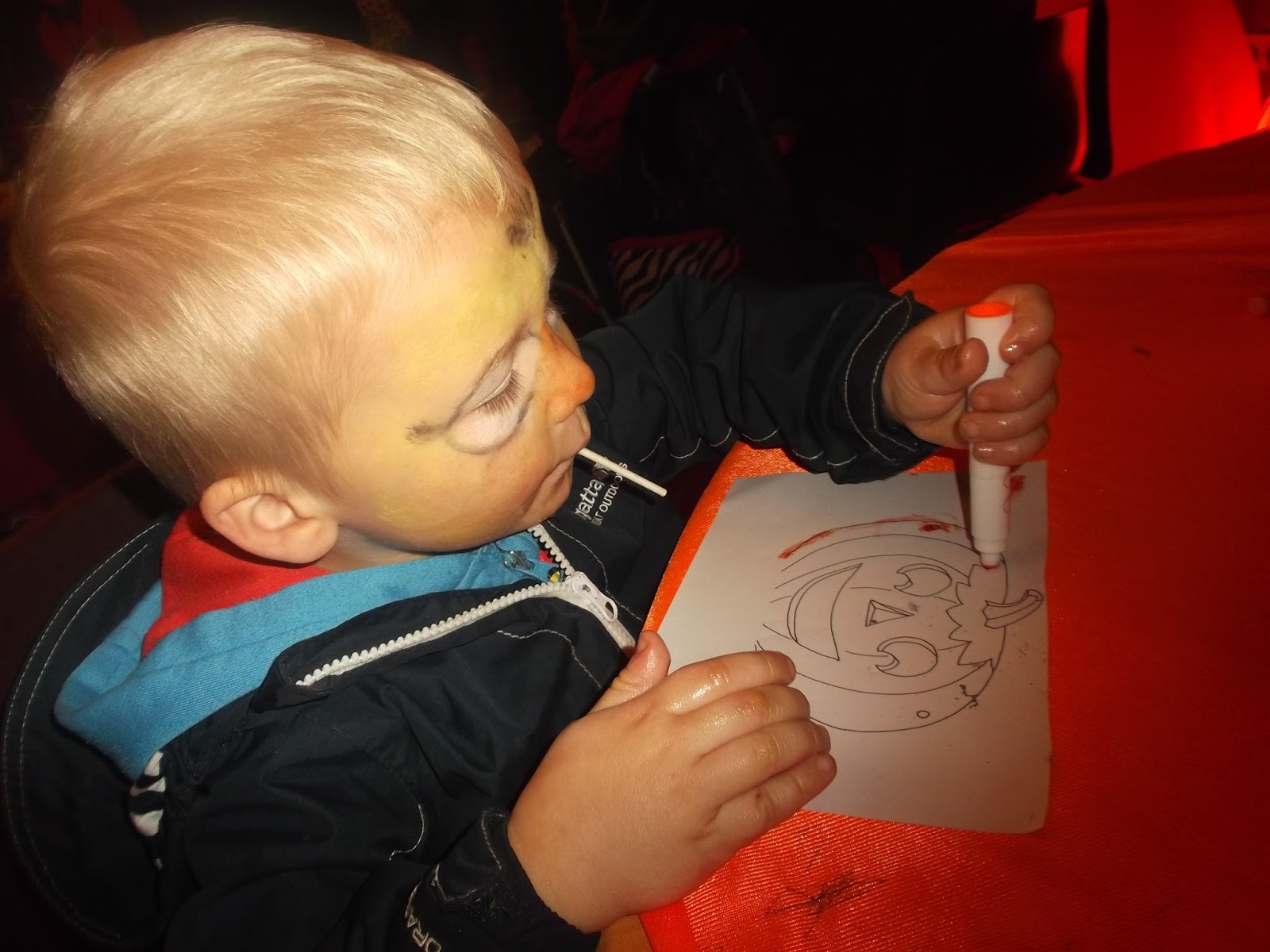 The first, we guessed, as the one staff member in the Stagecoach Saloon was so busy cutting out she ignored us.  The woman who took over wasn't really any friendlier and the one orange felt tip per table had been used so much it didn't work!

We gave up waiting and cut our own masks out with the kids safety scissors and put the string through while the new staff member moaned about why they couldn't have been cut out at the start of the day.
As the themed lollies were not offered I asked the boys if they would like their prize (which I felt really bad about having to do).

The second was not a lot better.  We entered the mine shaft and got our equipment together from the table (as the signs indicated and people before us had done) before a stroppy staff member came out and announced the panning activity was not happening today it was potion making with the witch, well we could do it if we wanted but couldn't buy anything.  So we all left our stuff and followed her through while she made a potion with the children.   This was actually very clever and the rainbow drops that came out the cauldron made even the most un-believing of children believe. 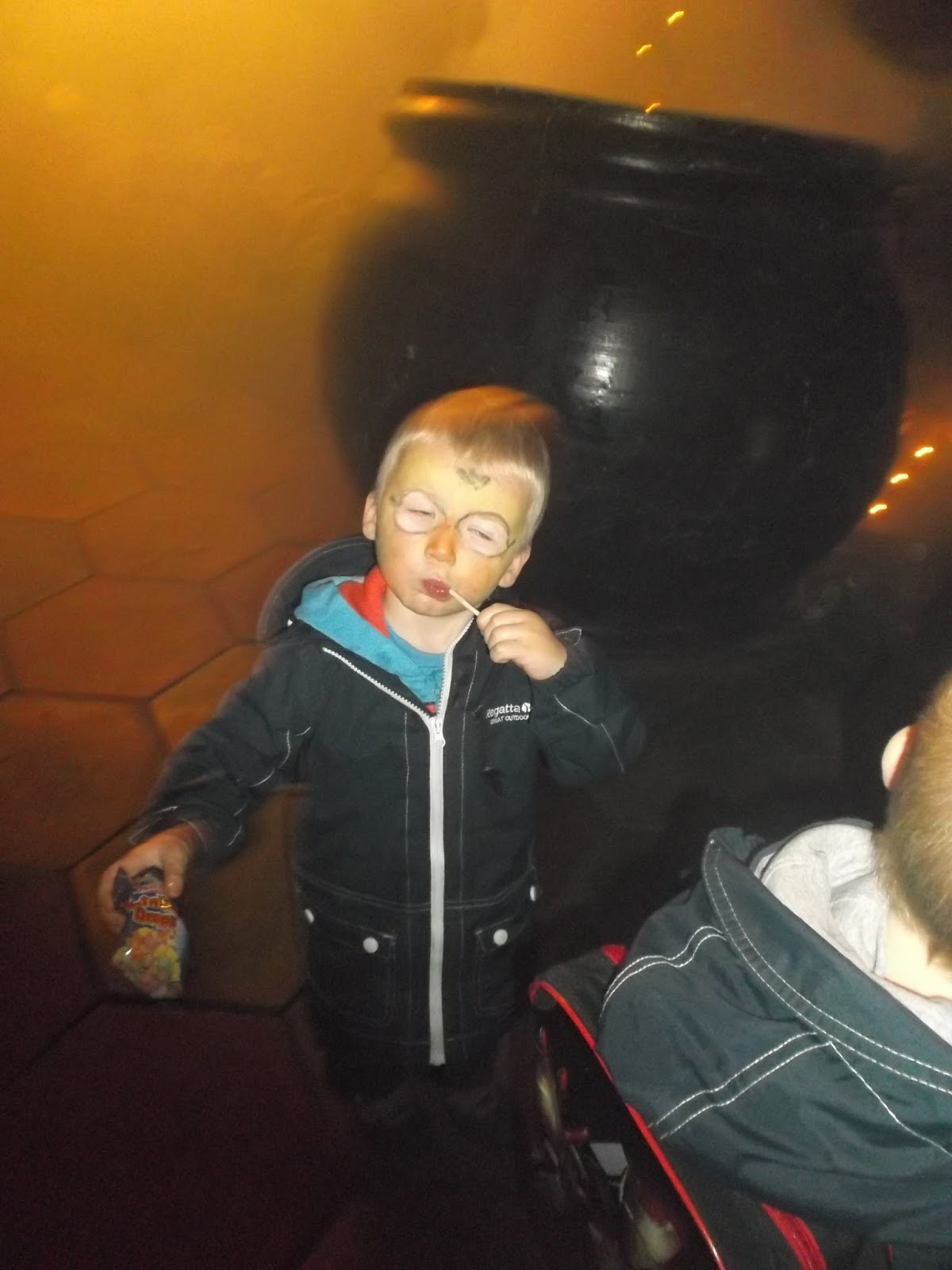 It's a shame not every member of staff entered into the Halloween spirit, especially those leading the themed activities but it was a great addition and one that in years to come, with the right PR and park presence could bring in lots more small visitors.   As for the rest of the parks rides, attractions and non-existent fancy dress competition ..... well I'll be blogging about that separately.

For the staff that did get into the spirit of things, in particular Josh (who wore tights over his head and scared the cr** out the boys at the dogems), the cereal killer (which took mummy to explain his costume to daddy for him to understand it) and the doctor who sneaked up behind Noah at dinner tme and gave him the fright of his life (and believe me that takes a lot).  Thank you very much.

At 4pm, full of sweets 2 very hyperactive little boys got on the bus home announcing they had really enjoyed their day out,

Disclaimer:  Swizzels invited us to Gullivers as their guests to experience their Trick or Treat trail and let you know all about it.  They have also kindly given a halloween sweetie hamper for you to win.


Have you entered my competition to win from Swizzels?  Follow the picture link below. 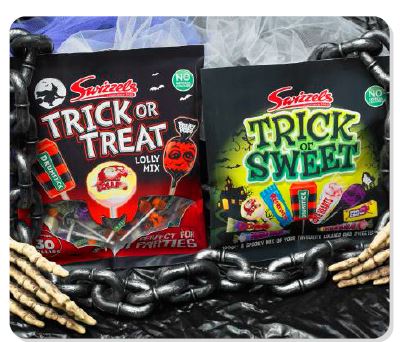