I used to love Brewers Fayre when I was living at home, we used to have one on the doorstep (and conveniently one that my sister went on to get a job at).  We moved to Sheffield and visited a couple but they gradually got taken over by another company until there are none left.
When FrankPR asked us to try out their new Autumn menu I was, initially, disappointed at the thought of having to turn down such a great offer but then remembered we were off to Chesterfield at the weekend for Ben's Birthday and they have a lovely Brewers Fayre, Lock Keeper, which sits near the Chesterfield Canal and is only a short walk from the bus stop. 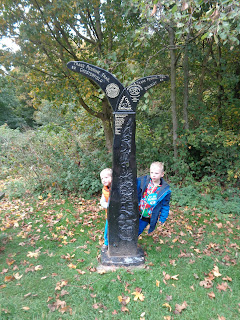 So presents opened we set off for Chesterfield, Ben had no idea what we were doing so we headed off for a little walk along the canal path before turning round and making our way to the Brewers Fayre, which is conveniently sited next door to the Premier Inn if you ever stay there. 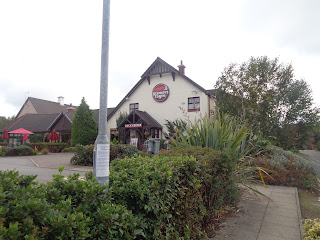 Knowing the types of meals in these venues we passed on a stater going straight for the main course.  The menu has changed in the last few weeks with the release of the scrumptious Autumn Menu bringing new flavours and additions such as Cock-a-Leekie Soup for starters, Smoked Haddock Florentine or a choice of 6 different curry's for main course and the warming Apple & Berry Crumble for dessert.  The children's menu has also had a revamp offering a huge selection (but I'll come to that in a minute). 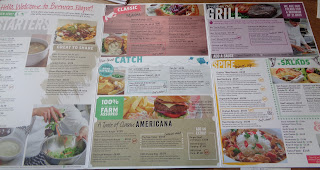 Both myself and my husband had a good look at the menu and were really spoilt for choice, do we go fish?  burger? chicken?  the new carvery selection (I'm a sucker for a good carvery) or a steak fresh from the grill??  In the end we both decided to try one of the new Autumn offerings 'Chicken & Ham Pie' (£8.99).


Delicious pieces of tender chicken and pulled ham in a creamy sauce encased in a butter pastry base and puff pastry lid. Served with chips, garden peas and gravy

As this was a close contender to the 'Ultimate Sausage and Mash' we opted to pay the extra £1.49 and have a giant yorkie each. 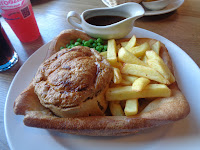 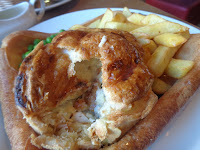 We were far from disappointed, the pie had a lovely taste with tender chicken and ham, crispy puff pastry on top and a thick, solid shortcrust casing.  The creamy white sauce was just the right consistency, complimenting the filling really well.  Both of us were a bit reserved as we don't like onions and so many pub pies have this as a feature.  Fortunately, although we saw a couple of pieces they weren't noticeable and certainly couldn't be tasted.
The pudding was huge and with the peas and chips I struggled to finish my meal, but I didn't want to waste any.  It's definitely my top choice if we visit a Brewers Fayre again.  Congratulations as well as my husband only ever has smothered chicken (seriously I can't remember the last time he had an alternative) and he's converted.

The kids were in their element, what to choose......  The menu is inspired by Beano with great cartoony pictures and the characters giving their names to various dishes such as 'baked beanos', 'grrrlic bread', 'the cod-apult' and 'Tricky Mini Doughnuts'. 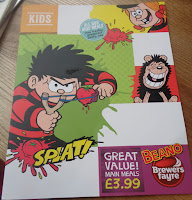 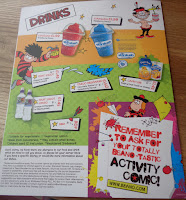 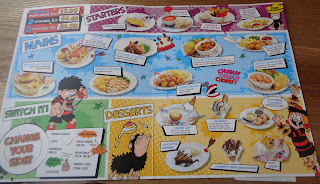 Ben opted for 'Sausage 'n' mash' (Sausage, Mash and Peas with gravy).  However he's not a fan of peas so I asked if we could switch it (as advertised) for garlic bread.  This was refused (apparently I could only swap the mash not the peas).  It wasn't worth arguing the matter (we were starving) but just be wary when you visit.  Needless to say Ben left the peas.  He wolfed down the rest of it though so it must have been pretty good (it certainly looked it) 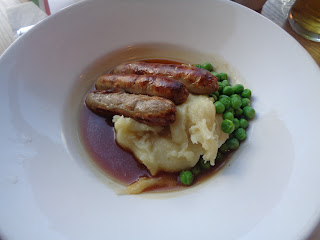 Noah went for 'The Big Bad Dog' (hotdog, chips, ketchup and mini corn on the cob).  Aside from the fact the bun was more use as a brick (but the manager sorted that one out) he was really pleased.  Hubby tried the hot dog and commented how yummy it was.  The corn on the cob was gone quicker then I could blink. 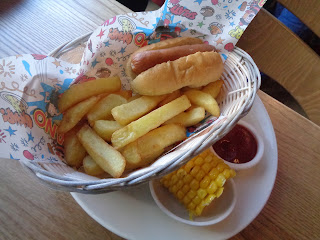 For drinks I opted for the unlimited soft drink and had to say the machine wowed me so much (little things) it deserved its own photo. Long gone are the strips of different options now you can select from the touch screen and even add flavours (lime Pepsi Max is amazing!). 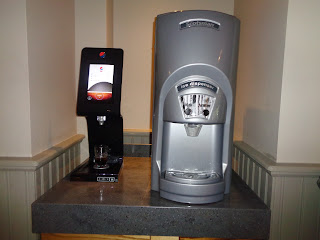 Hubby had a pint of Carling (or 2), and the kids thought they were on holiday with a Star Slush each. 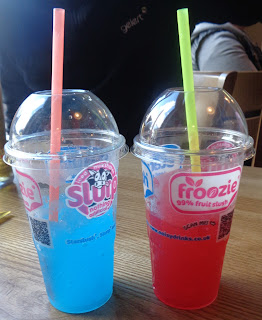 Full up the kids went to enjoy the play area a bit more (more on that in a bit) while we let our main courses settle.

Dessert.... the best part of the meal......and I really could have eaten soo much; Profiteroles, Treacle Tart, Caramel Apple Betty, Lemon Meringue Pie ...... but no I knew exactly what I wanted the minute I saw it... another new item on the menu Sharing Fondue.


Here's a great way to treat the whole family. There's something for everyone from mini doughnuts, to chocolate brownies, strawberries to waffles and marshmallows, this one's got the lot! It's even served with a pot of chocolate fudge sauce and caramel sauce

But the hubby wasn't as convinced, he's not a big fan of marshmallows, strawberries or mini doughnuts :(  but I knew the kids would be.  We added the 'Tricky Minni doughnuts' from the kids menu as they had popping candy which the boys are obsessed with to make a huge platter which was amazing!!!! 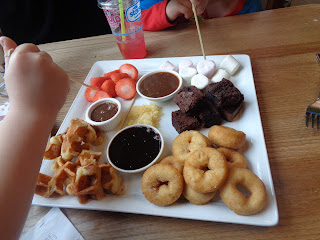 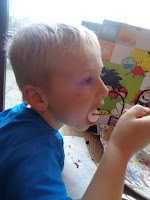 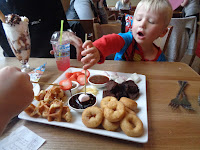 Hubby went for the Cadbury Chocolate Chip Cookie Sundae which looked really tasty and the meanie didn't even give me a bite (so it must have been good). 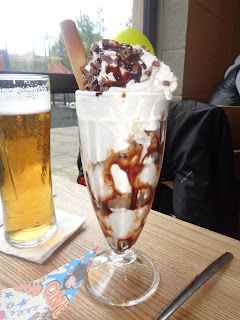 The full menu can be seen here (don't forget to change it to the restaurant you are visiting).

As it was Ben's birthday Louise at FrankPR had arranged for there to be balloons on the table and for the boys to have free passes to the Play Zone (more on that in a minute).

We were advised when we got there that there was a party on at the moment so it may be a little noisy and we could sit elsewhere (other than the dedicated play area) if we wanted too, but as the boys were up and down like yo-yo's it wasn't a problem.  The Lock Keeper is among many of the Brewers Fayre branches that have a bookable children's party room, "The Den", for £8.99 per child (venues may vary) you receive a dedicated party host, free cake for bookings of 8 or more and party bags for everyone.  This is great value if you compare it to a dedicated soft play centre (where the food, in my experience, is not even close to the range and quality offered here). 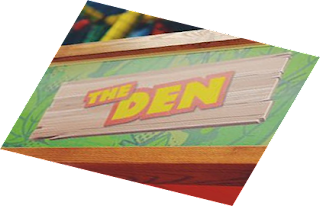 Some of the larger Brewers Fayres have "Play At Brewers Fayre" areas.  These are brand new, Dennis the Menace themed, fully supervised (questionable as I didn't see a member of staff go into the zone once) play areas so you can relax with a drink while the kids enjoy 90 minutes of play for £3 each.  It is designed to look like a Beano tree-house they can climb up and slide down with a toddlers zones for really little ones.  Monday to Friday the staff run additional daily activities. 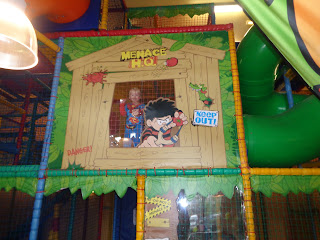 The boys had a fantastic time in here and really didn't want to leave. I've never seen meals eaten so quickly so they could go back and play and the peace and quiet while we were waiting for food was bliss.   Unlike large play centre the numbers are monitored and there are only a handful of tables so you are never too far from your child.  I also loved the fact that, unlike large play centres, there were no rowdy 'big kids' spoiling it for the younger ones.  With his broken arm I've kept Noah out of play zones scared he'll be pushed over but I felt really relaxed here and assured he'd be ok, he loved the freedom of being able to climb and run to his hearts content. 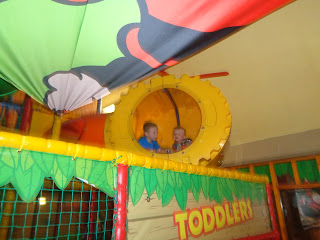 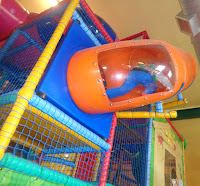 When we'd finished Ben spotted the outdoor play area so we let them have 10 minutes outside.  They'd got new parachute men this morning and were eager to find a great height to drop them from! 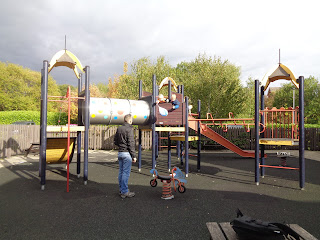 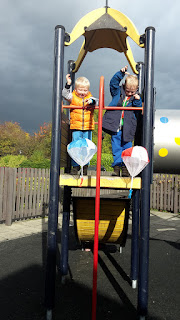 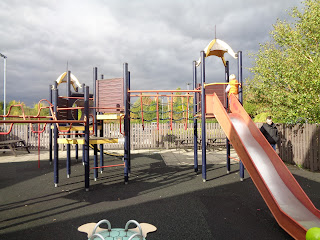 I really wish we had one closer but next time we're on holiday we'll definitely be looking out for a Brewers Fayre so we can dine there again.

Disclaimer:  We received a £50 voucher to cover our meal in return for an honest review.
Posted by Scouting Mummy at 19:36