Review: The Dinosaur that Pooped the Bed

It's been 10 months since we reviewed the other Dinosaur that Pooped books and they still make an appearance on a daily basis, Noah (4) especially loves them, I often find him curled up under the covers with them in bed when he should be asleep.  He was super excited when I told him Tom Fletcher and Dougie Poynter has released a new one - The Dinosaur that Pooped the Bed. 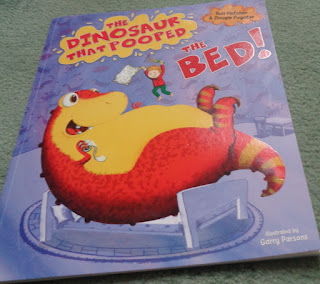 You would be forgiven for thinking this was a book about potty training the rogue dinosaur who poos wherever and whenever he feels like it with huge impact, this one is about the other thing all parents hate ... messy bedrooms.

Danny and Dino want to sit down and watch cartoons but mummy forbids it until their bedroom is tidy, their mummy certainly has more power than I do as they immediately trot off to do just that (not an hour or tantrums first) but their idea of tidying a room is quite different to yours or mine.  Do they pick up the toys and put them away?  Do they sweep them under the bed and hope no one notices?  No..... Dinosaur eats it all.  And as in the other tales it has unavoidable consequences.........

The boys favourite bit, as always, is the explosion and aftermath while mummy liked the fact the boys added a little something in for the parents to notice..... can you spot it?


"It smushed the CDs, which, on reflection,
Were far from the greatest of record collections". 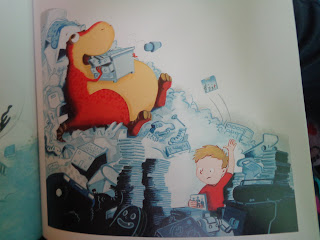 Ok so perhaps the rhyming is quite as good as in the other books (go/ shows, soldiers/ shoulders, burger/ burglar) but who cares, the predictable format, great illustrations and theme is enough to have any child (and their parent) giggling.  Although poor little Noah does apologies every time he needs to say a 'naughty' word.

I was sent this book to review and the 'lovely' people (I use the term loosely) at Random House put an extra 'treat' for the boys ...... The Dinosaur that Pooped A Planet - Sound Book.
Yes it is exactly what it sounds like and the boys LOVE it (mummy not so much).  They love getting to the 'poo' bit and pressing the correct button to make the sounds.
I forsee a new blog post ..... 101 ways to murder a book. :)

However if you have nieces and nephews who's parents you wish to get your own back on (you know the type, the ones that got Abbie that keyboard last year or bought Thomas that drum kit for his 2nd birthday) then this is the best Christmas present. 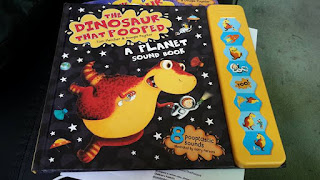 Disclaimer:  I received these books free of charge for this honest review, the links above are affiliate Amazon links.
Posted by Scouting Mummy at 10:21