Ben's school teachers children using the Jolly Phonics way of learning their letters.... and he is flying.

Even as an ex-early years teacher it's new to me.  When I taught in schools the children learnt their letters using the 'Letterland" system.   These were letters that all had a colourful character attached to it and a song/ story for each character to help them pronounce their letter sounds correctly.

"Jolly Phonics" is very similar but instead of covering just the first 26 letters it incorporates all 42 phonemes.

This really useful factsheet will tell you a lot more information about how they are taught any why.

You can buy the CD/ book with all the songs in (and associated actions) to help teach your child at home.  It's brilliant for parents and children alike as I was finding I was pronouncing some of the phonemes incorrectly.

Best of all the boys (even Noah who is only 2 and a half) think it is great fun to fly like an aeroplane for 'n' and don't realise the are learning.  although his teacher sends home 3 letters a week to practise on Ben asks daily for the songs on (these can easily be found on youtube) and we all join in with them.. 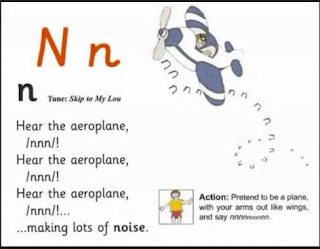 My only quibble is that of the positioning of the letter 'q'.  Because it is always partnered with 'u' it has been placed in section 7 as one of the last phonemes to be taught.  Personally i believe it should be an early sound (section 3) as if children see the alphabet laid out they will see 'q' and wonder why they haven't been taught the sound already.

You can buy activity books from places such as Amazon or ELC but I'm resisting buying these for now (so cannot comment on their usefulness) as there are plenty of downloadable worksheets on the Jolly Learning website for parents and professionals to print out, or

Ben's been 'reading' for nearly a year now (since before he started school) but we've concentrated more on reading the first 45 words by sight (as they can't all be sounded out) which gave him a flying start in school.  (this will be covered in a separate post)  Since being taught 'properly' in this way by the teacher he now sounds out his words and ...... WRITES.  Up until 6 weeks ago it was a fight to get him to write his name.  Now he asks for paper and a pen and sounds out the words he wants to write.  If it is a word that can't be sounded out we use a word mat. where he can find the word and copy it (again this will be covered in more detail in a separate post).

New comments are not allowed.