Imagine a game of scrabble with no board ... well now you have it.... Bananagrams.  Much more lightweight and easier for travelling then the popular board based game and with endless possibilities.

Following the #NorthernBloggersMeetUp the kids were eager to see what I had in my goodybags.... the makeup, tea and supplements were very quickly pushed aside when we saw a bright yellow pouch (and that was just my reaction).   I'd seen Banangrams on the shelf in my local stores, they are hard to miss, but already owning more then 1 version of scrabble I'd not been allowed to buy it.

Bananagrams has very simple rules, and if you don't like them there are plenty of other game ideas .... or make up your own. 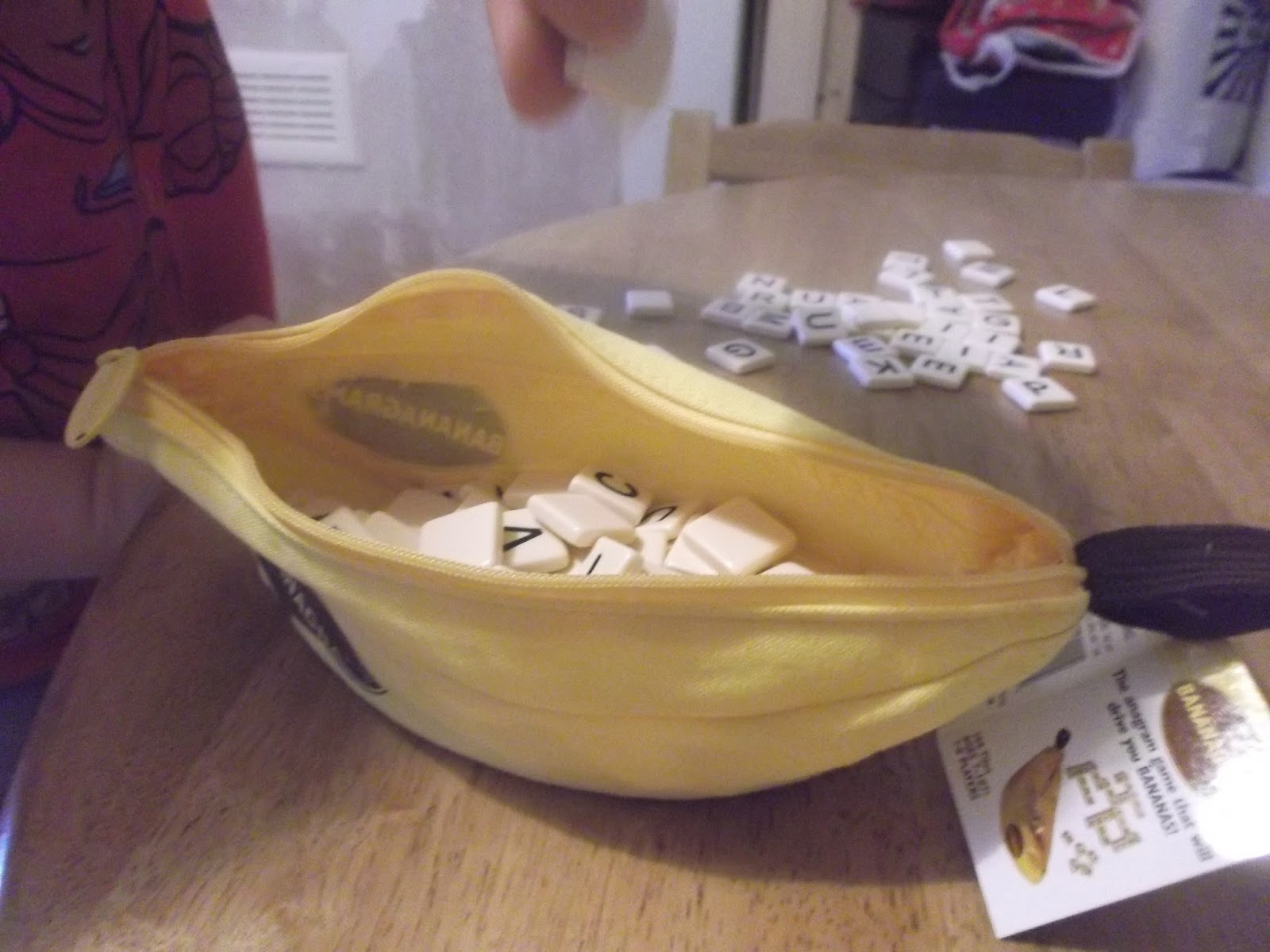 To start the game simply unzip the Bananagrams bag and empty the letters onto the table. Make sure all of the 144 tiles are face down and in a "bunch".

Next, each player takes their tiles, for 2-4 people you need 21 tiles each and for five or six players just 15 tiles each. For seven or eight players you will receive 11 tiles each. Once all tiles have been dealt out some player says, "Split!" This is the signal for the players to begin turning over their letters and creating words.

All words created must connect and intersect, just like a crossword. When a player uses up all of their letters they shout, "Peel!" All the players must draw another letter, players can rearrange their letters as often as they like, even letters they have already placed.  I may have conveniently forgotten to share this rule with my husband and the look on his face as he drew a "Q" with no "U" to be seen was priceless.   So long as the resulting combinations all make real words and all join appropriately you can play around as much as you like - the only timer you are against are your fellow players.

If a letter is drawn that seems impossible to place (Z anyone), the player may shout "Dump!" and exchange this letter for three others. No other player should take a tile at this stage. 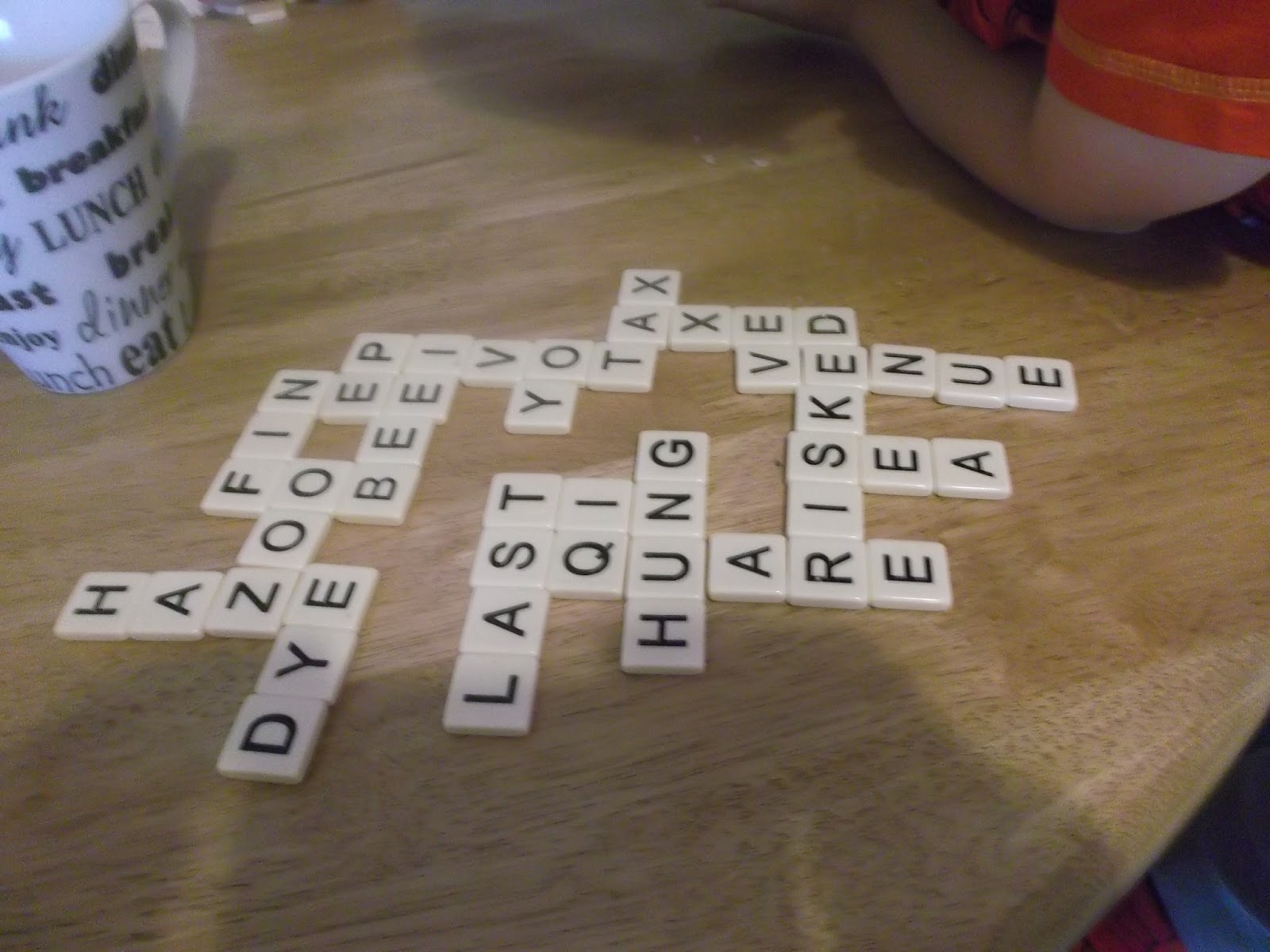 Play continues until there are less tiles in the bunch than there are number of players. Then the first person to use all of his or her remaining letters says, "Bananas!" This person will be the winner ... if all of their words check out.  With dictionary and scrutinising glasses in hand all other players now inspect the winning "hand". If an illegal word (you can decide which dictionary, are 2 letter words allowed?) is found in the played "hand", that player is declared a "rotten banana" and is out of the game. His tiles are returned to the bunch, and play is resumed as before.

You can play the 'hands' independently of each other or keep score over a few rounds.

Included in your Bananagrams pouch are a few variations.

"Banana Smoothie", involved dividing ALL the letters evenly at the beginning of the game, this will mean . no peeling or dumping.  The game plays and ends in the same way as the standard rules, with the first player using all his letters declaring, "Bananas!"

"Banana Cafe". Is a quick version for play while waiting for a meal in a restaurant, or keeping kids amused for short periods of times.  In this version, the players choose 21 letters. There is no peeling, but dumping is allowed.  Play will continue until the winner shouts (probably a bit quieter) "bananas".

"Banana Solitaire" begins with just 21 letters. This is played on your own and you can peel or dump when needed. Play out all 144 tiles, perhaps time yourself and see if you can complete it quicker next time. 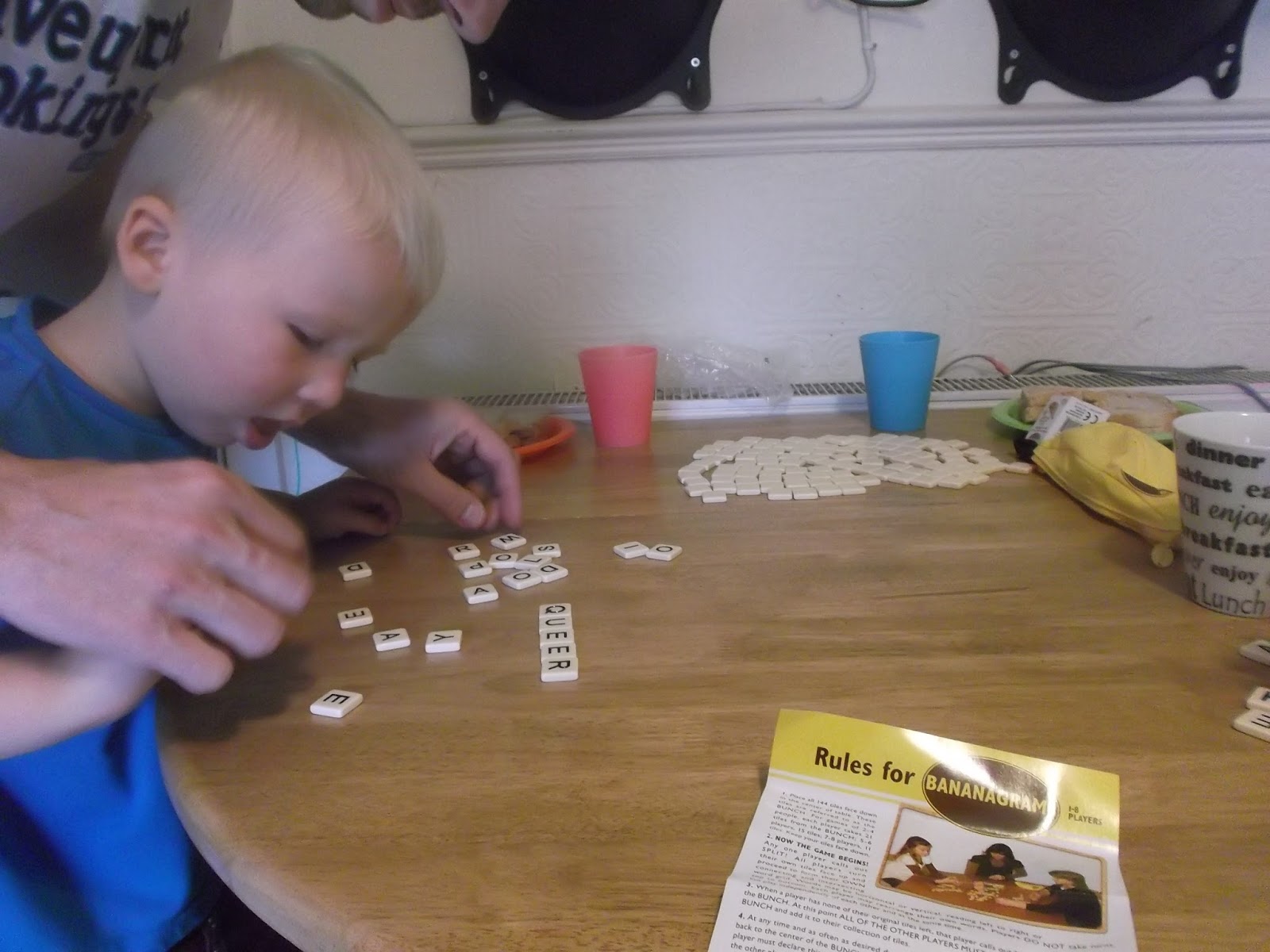 I love the fact that Bananagrams is so flexible.  The boys really enjoyed playing in teams with me and daddy
and learning new words as they are too young to play themselves.  But at 8am the next morning my brain was not ready for another match.  As Noah is still learning his letters I simply got a piece of paper for each of them and wrote the alphabet on it.
We then turned all the letters upside down and gave each of them 26.  They had to match as many letters as they could and keep repeats in a dump pile.
Next they swapped any tile in their 'dump' for one in the 'bunch'.... this continued until they had filled all 26 letters.
Note that this will only work with 2 children as some of the letters only have 2.  The spare pile for dumping should also remain face down.  This will ensure that too-clever 5 year olds do not refuse to 'dump' their 2nd Q so that their brother can win!!!

Sadly I forgot to take any pictures of this version but will post some up next time the boys play it as I am sure it will make a re-appearance. 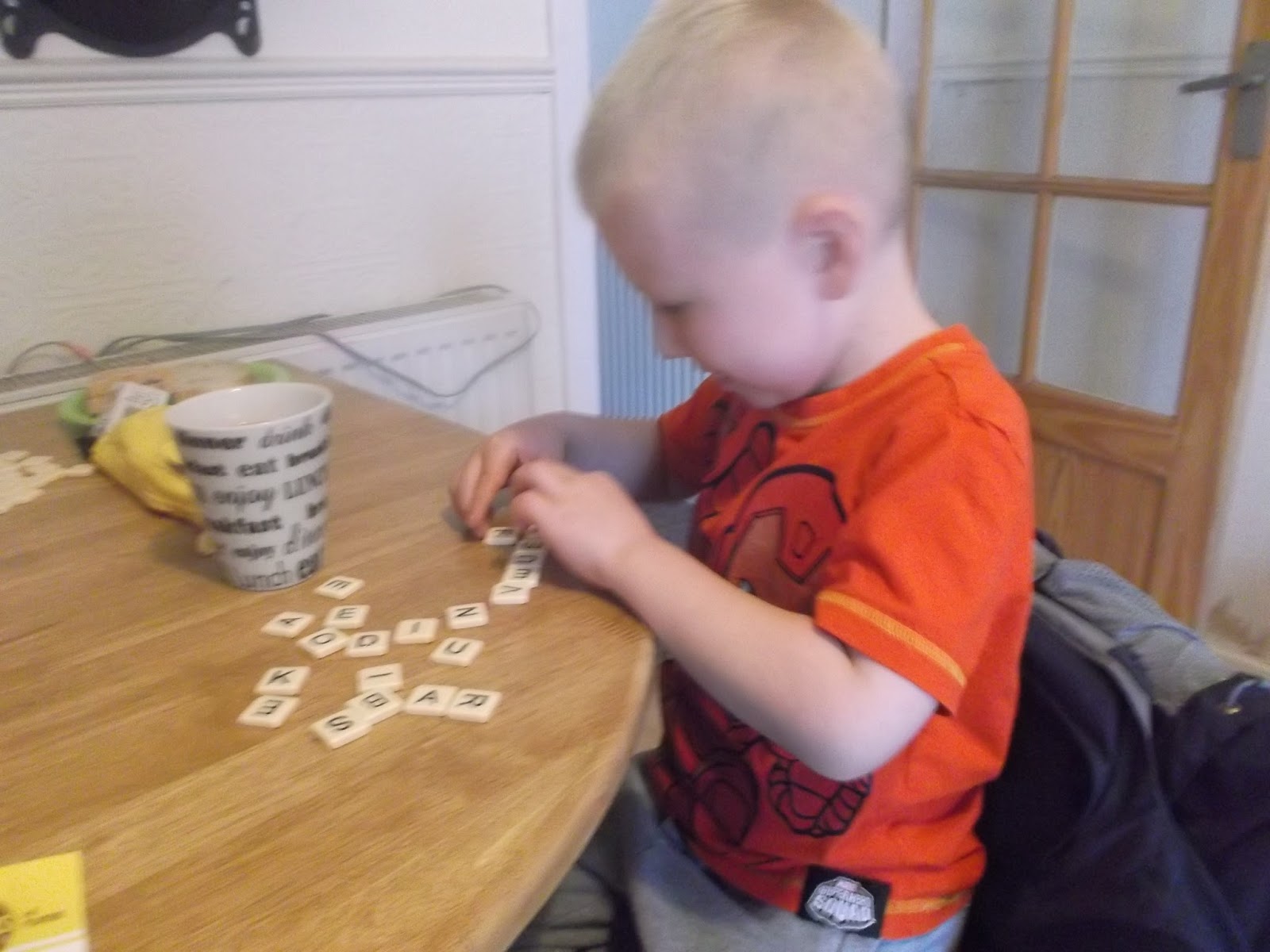 The boys also enjoyed using the tiles to spell their names and words they did know like 'mummy', 'daddy' and other simple CVC/ CVCC words.

Alternatively you could create a board (on A4 paper) much like in Scrabble Juniors and see if the kids can make the words over the pre-written ones.

There are many many versions of Bananagrams, such as double and jumbo, with additional new games such as Appletters and Pairs in Pears.   f you are looking for a stocking filler for anyone 5yr+ you cannot go wrong with this game.

Disclaimer:  We were given Banangrams free of charge in our #NorthernBloggersMeetUp goody bags.  I loved them tho and had to spread the word, all thoughts and opinions remain my own.