a couple of pain killers later (becuase the ghost in the house had used the last of the cold n flu tablets and not told me) I was up and raring to go (well ok I could move off the sofa).
By 8am the kids were up and the chicken was cooking nicely in the oven so we could go out for the day knowing all I had to do when I got in was actually MAKE a pie.

Question time.......... do you use the roasting bags for your chickens??  have you ever managed to empty the fat out without covering the kitchen??  It's all well and good "snip the corner and empty it out".......... except my bags crumble the minute I touch them!!! Or is it just because I am using cheap ones (I get the ones linked to but at less then £1 for 10 from home bargains).

by 11am the chicken was resting, the kids were dressed and the picnic ready..... kids sent upstairs to brush teeth..... cue lots of laughing and shouts of "can I come and join in the fun too"..... fun..... teeth ...... something wasn't right.
DS2 had filled the bath with water and was stood in it (fully clothed) having a paddle!!!!!!!!  GRRRRRRRRRR.

A change of clothes later and we were eventually ready to go get the bus (urggggg busses and kids + buggy).  This was surprisingly easier then i expected (after we ran for the bus as I mistimed it and wasn't waiting 20 minutes for another)


This park is HUGE and was covered in 100 stalls from the local creative kids business (Creation Station) to local sweet sellers (sweet sensation), to the NHS (apparently their budget is spent producing canvas bags to alert people to cancer) to old fashioned cars to dog agility to funfair rides. 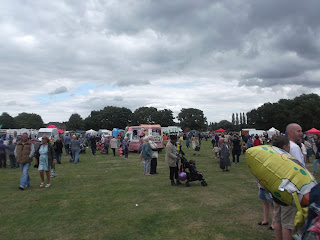 It was a good day out, the kids loved sitting in the fire engine (honestly DS1 was just mardy) and watching the chip-pan fire demonstration.  There was also a free fire engine bouncy castle for them to play on. 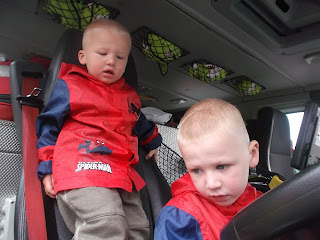 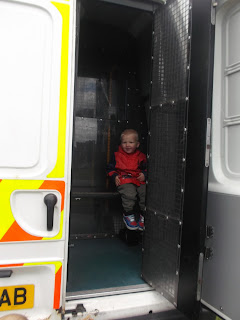 the weather couldn't quite deccide if it wanted to be hot and sunny or cold and overcast, so we decided the best picnic place would be near the trees.... I was freezing lol. 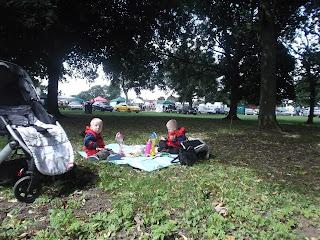 DS1 became obsessed with the land train that kept coming and driving around near us, so picnic over we went on a hunt to fnd it's stop..... kids bundled into a 'plane' I parted with £2 each for a ride EEEEEKKKK. 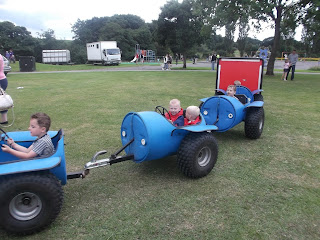 We also had some ice creams - now don't get me wrong and ice cream is an ice cream...... except when it is a Granelli's ice cream..... £4.50 for 2 lollies and a knickerboker glory (so not a bad price)
They had clearly had some sort of freezer malfunction (which they failed to admit to customers).
Both my boys had fiveices which are large long multicoloured ice lollies.  DS2's broke in half the second I took the wrapper off.  DS1's broke after about 2 minutes.  needless to say there was tears.
My knickerboker glory, apart from looking nothing like the picture, was re-frozen.  it was like rock and really unappetising (in fact it is the first time ever i have thrown away ice cream).

I'll be stearing clear as much as possible in the future - Unfortunaly they seem to have the monopoly in Sheffield and are pretty hard to bypass and go elsewhere in the summer months. 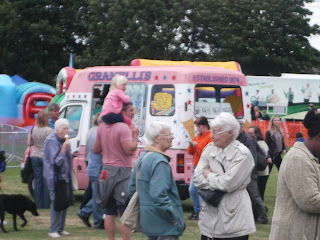 They also met with my other bugbear.......... NO PRICES!!! I think it's disgusting when rides (the land train mentioned earlier included) do not display prices for their services/ goods.

DS1 then spotted the miniture train (can you sense a theme here?) and wanted to go on it, at 50p for 2 rides (ok so it was only down a track and back twice)  he really enjoyed this.  and YAY 5-star for them - they actually had their prices clearly displayed. 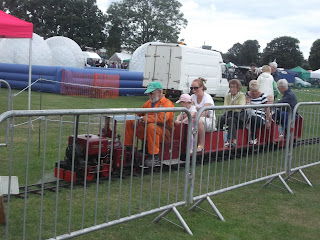 Evening
this evening I joined the other Parent Bloggers at the Sunday night Twitter party #pbloggers.  was great to discuss days out with other mums and dads and share ideas and experiences.