With last weekends gorgeous sunshine we decided to pay Clifton Park a visit.

It's not too far away from us (20 mins on the train), and with an already paid for tram pass and a railcard means it's cheaper for us to go there for a day out then get a day rider bus ticket to the other side of Sheffield (ridiculous eh!) 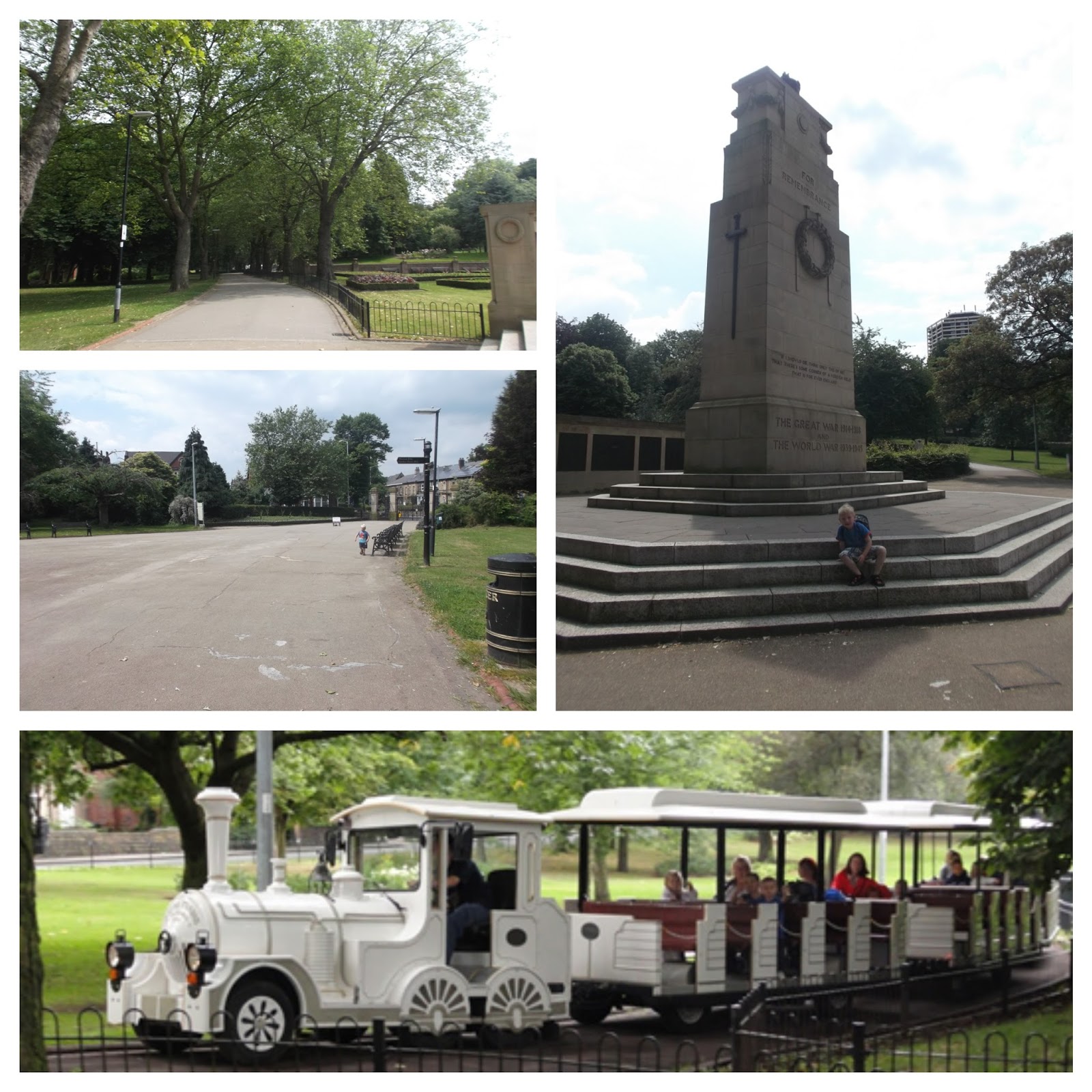 If you are getting the train it takes less then half an hour to walk through the town to the park and is really easy to find (tho somehow we went a completely different way to last time).  Failing that you can get a bus there, the interchange is a short walk from the station.

We love Clifton Park as it has plenty of play areas, a sandpit, a funfair not to mention endless grass and a museum (which we still haven't been in yet)...... but the thing that makes it for us... the water park.

We've not been here for a couple of years as the health and safety police condemned the water park for being "too slippery".  They had to close it, redo the flooring and put in a new filter system.  I believe it eventually opened in time for the last weekend of the Summer Holidays.  A look on Rotherhams website and their own site this year told us it has re-opened - YAY.  So we packed a picnic and set off.

The entrance to Clifton Park is so grand and amazing.  You walk through the gardens, passed the fountains and war memorial to reach the play areas.  If you are lucky you might spot the little train along the way.

The good news was ... the water park was open.... sadly only a fraction of it as they are STILL digging it up. We picnicked and played in the water regardless.  The boys couldn't remember it when it was completely full of water (as I do) and actually enjoyed just running in all the dry bits.  Noah wondered into the middle of the water fountains just as they shot up as high as they go, I think the noise and height scared him a little bit ...... but it didn't stop him doing it again..... and again. 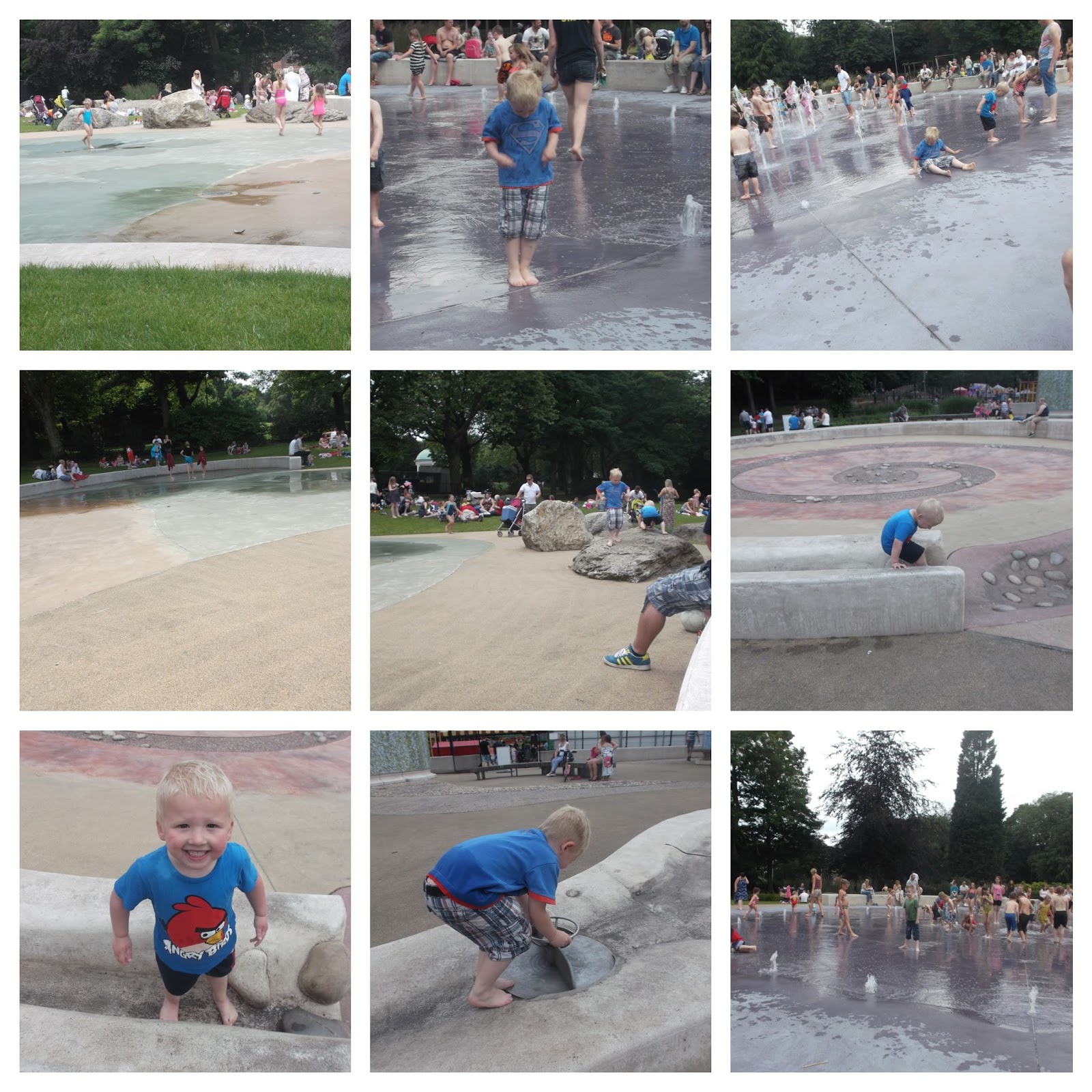 Dried off and changed we moved onto the sandpit.  where they both headed up the tower one at a time and ferried dirty, wet sand to each other.   They also played on the slide, the diggers and loved the water tap (I was so pleased I'd got them changed and had no more spare clothes). Fed up of sand we went off to explore the playgrounds.  I remembered a lesson from last time about the really big enclosed slide and steered the boys away from it (Ben got stuck and it was a nightmare to rescue him), however with 3 play areas to choose from there is something for everyone. 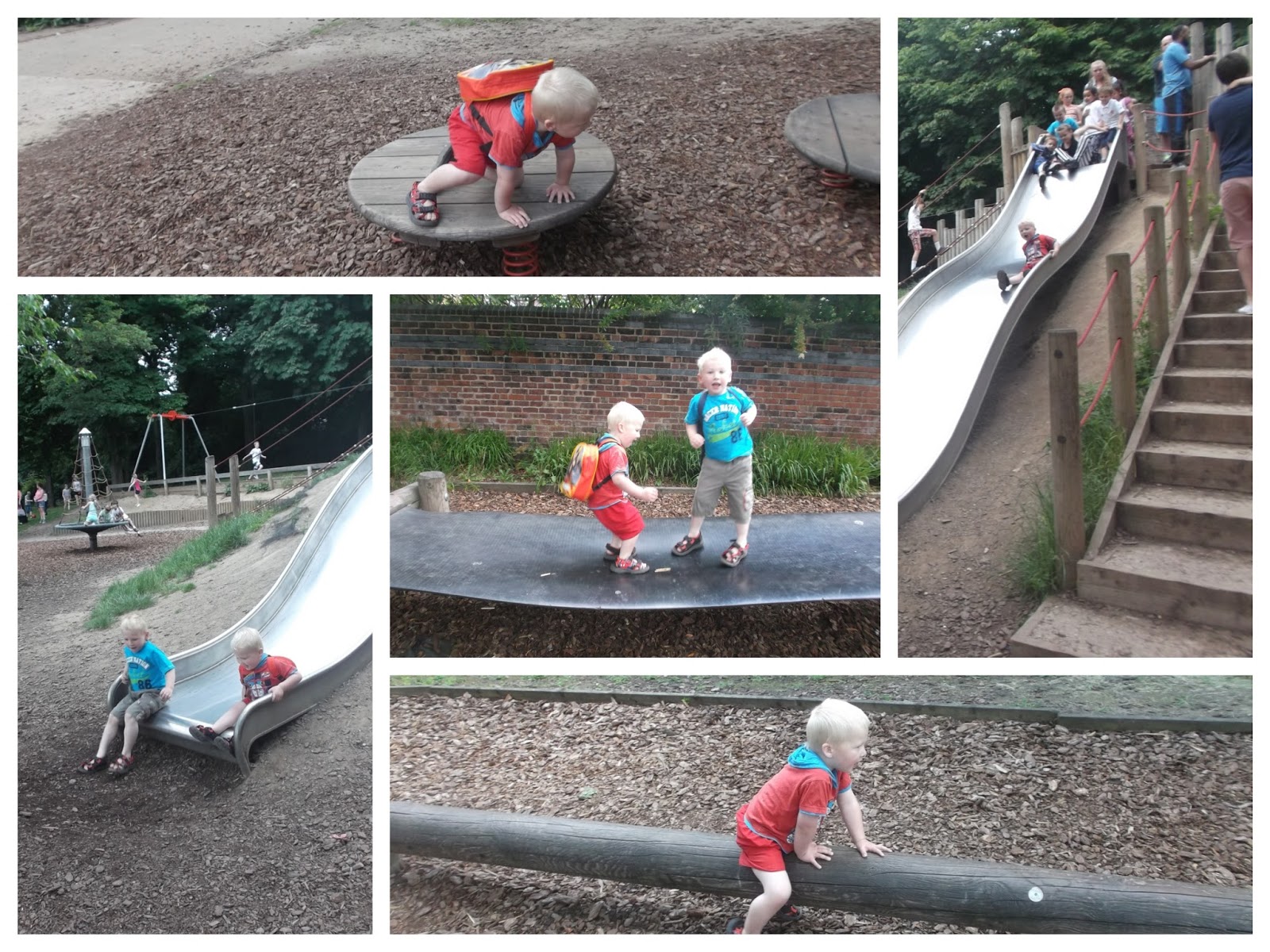 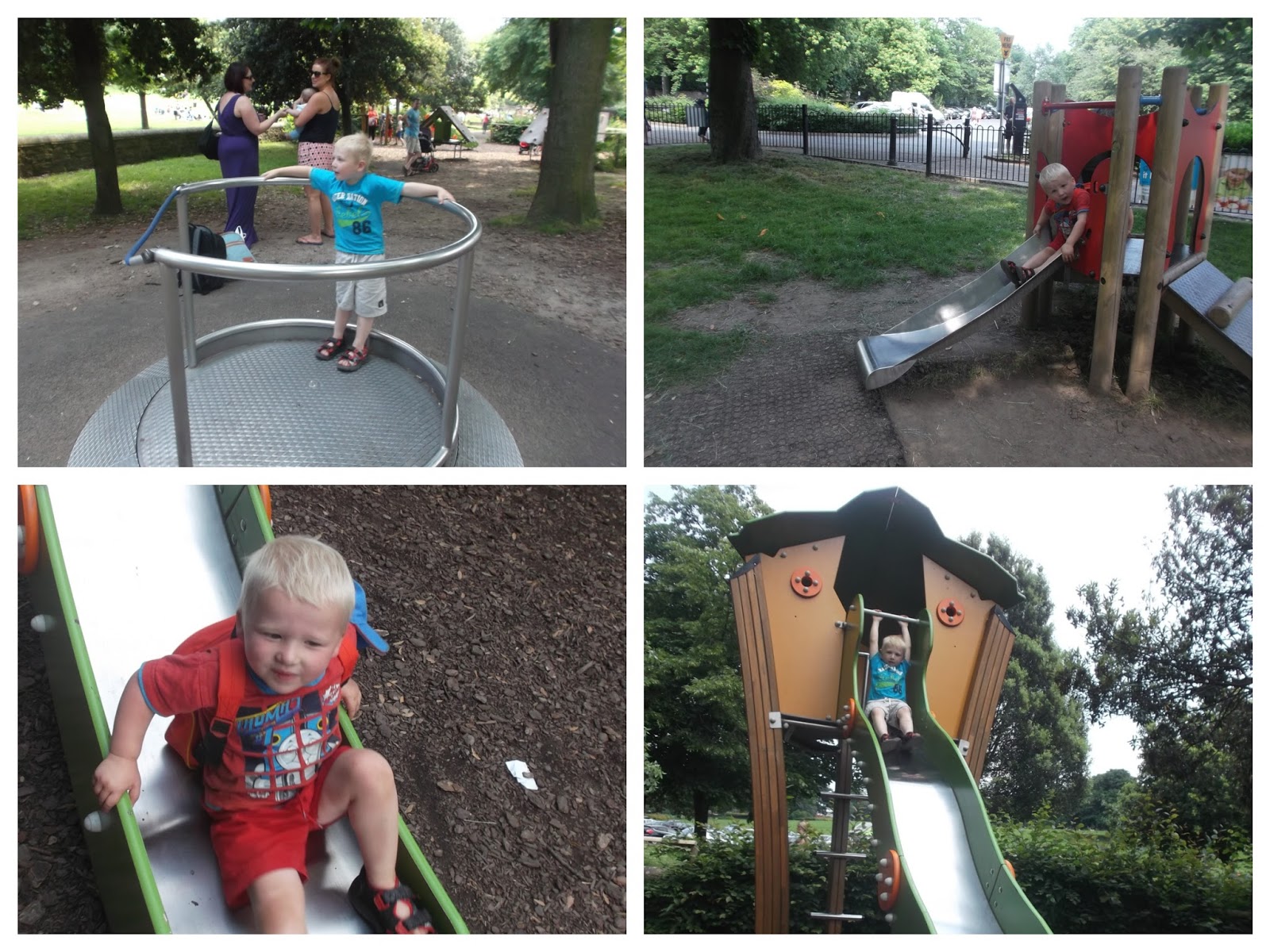 It was then the big decision time for the boys ... ice cream or fun fair (I didn't have enough money for both).  They settled on the fun fair .... with ice cream at home after Tea.... fair enough. 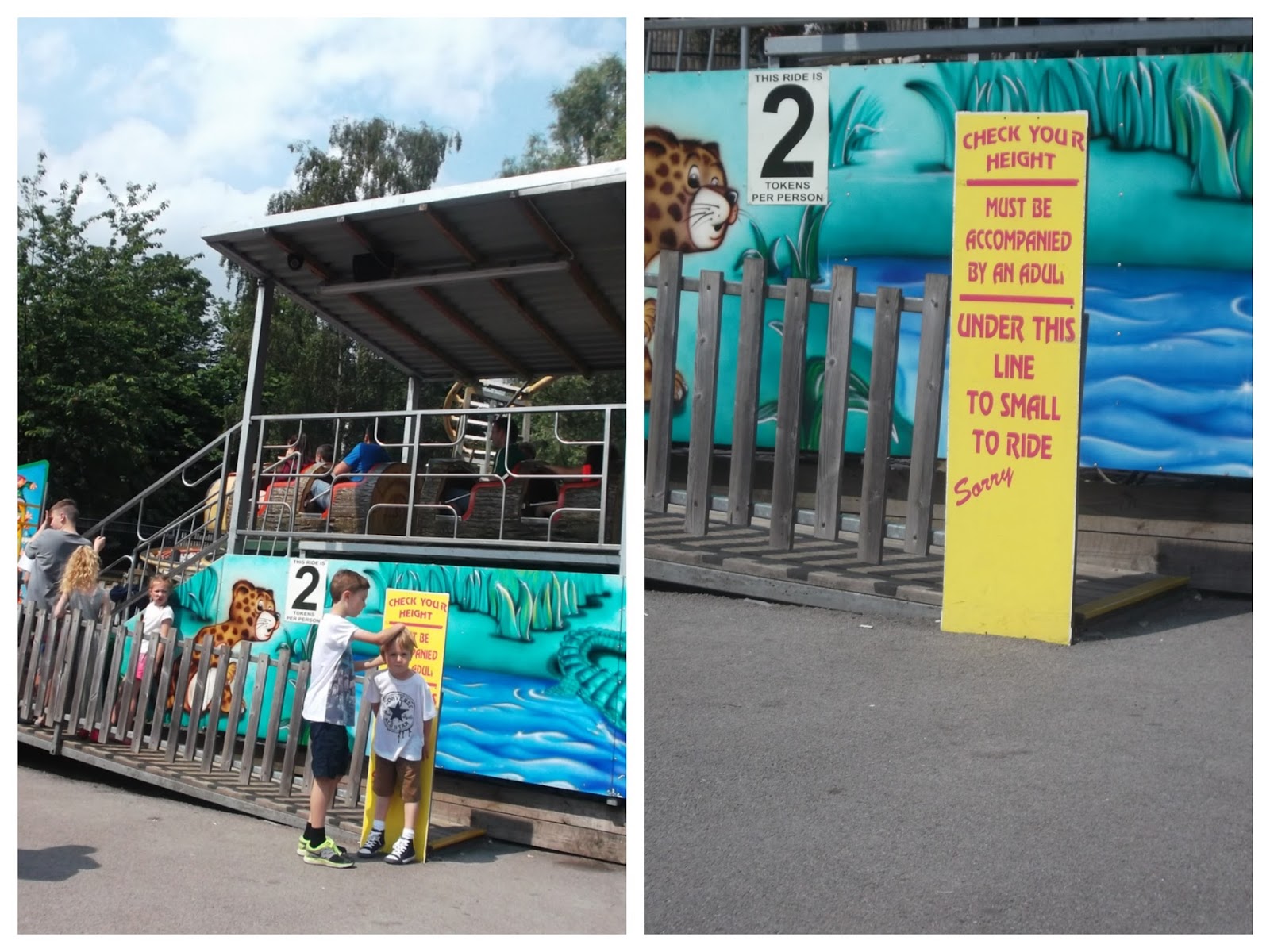 We wondered through the funfair and the large roller coaster caught their eye (proper daredevils my 2).  I checked their heights and both were ok to ride "with an adult".  This ride is 2 tickets each, apparently due to the cost to run, most of the rides are only 1 token.  But ok they knew they'd only get one ride as it meant I had to buy tokens for me too, so we set off and paid our money (70p a token).


After queuing up we gruffly got asked how many adults there were, I stated just me and we were refused entry.  Apparently they needed an adult each.  I asked if she'd let me go on with them one at a time (as all the theme parks would allow) without needing to by another ticket, again she refused.  So angry (me) and upset (the boys) we went off to see what else they wanted to use their tokens on.  Whilst we didn't manage to find any smily  friendly staff members they eventually had a fab time as it meant they could have 3 rides each.  They settled on.....


According to the sign Phase 2 of the Water Park is supposed to be finished by the start of the school holidays, bringing water back to the paddling pool Rill wall and the water spiral.  There will also be toddler friendly jets in the paddling pool.

We'll be heading back in August (assuming we get some Summer) to see if they really have finished it, but one things for sure, I'll be trying to avoid the fun fair and their rude, unfriendly staff.
Posted by Scouting Mummy at 17:03